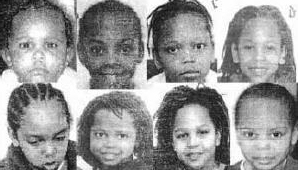 The search is on to find eight foster children ranging from 11 months to 11 years old who were last seen with their biological mother during a supervised visit at a Forest Hills child agency.

The eight children were placed in three foster homes following a domestic violence complaint against their parents. On Monday they were brought to Forestdale Inc., a childcare facility working with the city Administration for Children Services (ACS), for a supervised visit. The seven boys all named Nephra Payne after their biological father and one 11-month-old girl named Nefertiti Payne, are believed to be with their mother Shanel Nadal. Police suspect the children’s father, Nephra Payne, may also be involved.

The following day, during a family visit at Forestdale Inc., in Forest Hills, Nadal vanished with the kids.

Grace Stevens, community development associate from Forestdale, told The Forum that the company was refraining from issuing any statement other than that they were working with ACS on the matter.

However, the agency defended their actions in an interview with the New York Times and said the group slipped out of the home after going inside for some soda. Forestdale has an outdoor campus with picnic tables and playgrounds for families.

“It’s an unfortunate situation. But she was desperate. She had a plan. Imagine if someone took your children away from you. What would you do to get those children back,” Anstiss Agnew, the Forestdale’s director, told the paper.

Agnew continued that the agency encourages visitation for families and attempts to provide a safe atmosphere for families. The agency maintains they look to achieve a balance between an inviting environment while keeping children safe.

The children’s current foster parents have pleaded with Nadal to bring the children back in various media reports.

In a statement issued Tuesday night, ACS said it is working diligently to locate the children. The agency has sought and obtained warrants for both parents and urge the public to come forward with any information.

Police believe the family may be driving in a black 1996 Chevy Suburban with license plates EXZ5896, a 2003 Ford, four-door sedan, with plates ZDF6104 or a 1993 black Infiniti J30 with plates ETK1598. They may be headed towards South Carolina, where the family used to live.

Anyone with information about the case is asked to call CrimeStoppers at 800-577-TIPS (8477). All calls are confidential.