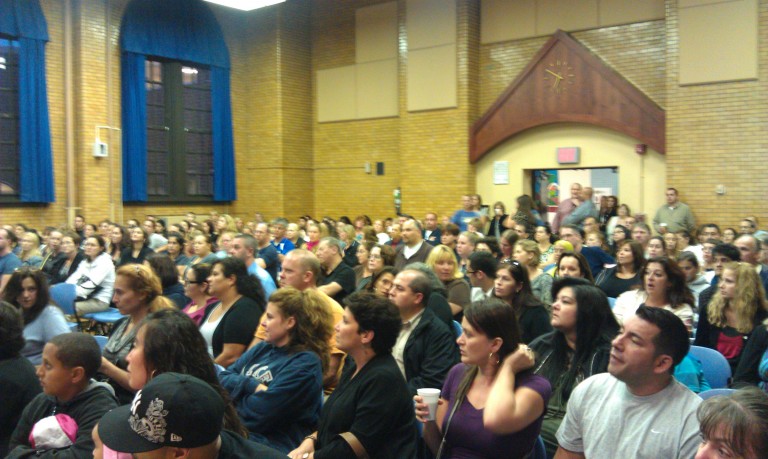 The auditorium of PS/IS 113 in Glendale was packed to capacity last Thursday for a presentation from the city Department of Education’s Office of Portfolio Management (OPM) about a potential school enrollment zoning change that would split Glendale and force some children to further to PS/IS 119.

According to OPM analyst Brandi Holton, the close proximity between the two schools (less than one mile) and the current registration trends makes rezoning the two schools a logical step to alleviate overcrowding at PS/IS 113.

While a formal proposal to rezone the school wasn’t presented at the meeting, city officials outlined the plan in case a rezoning is necessary in the future.

“This is an ideal time for us to really get feedback from the community,” Holton said.

Under OPM’s tentative plan, students between 80th Street and 84th Street—which totals 18 current students—would be switched to PS/IS 119 to better utilize both schools.

However, parents protested any changes to the current school zones.

“Glendale is a close-knit community and you want to split us up,” said Patricia Crowley, a local resident and city schoolteacher. She claimed the city messed up the rezoning of PS/IS 119 when it was expanded last year and now even more parents are being affected.

Even the principal of the school, Anthony Pranzo, asked that the school is not rezoned.

“We are overcrowded,” Pranzo admitted, but the school has already sacrificed teachers’ rooms and a librarian’s office to accommodate students. “Now it works. As far as I’m concerned, we’re fine.”

Pranzo noted that if the city were to cap the number of students allowed in eighth grade, and possibly cap kindergarten classes next year, the school would not be overcrowded.

But OPM analyst Drew Patterson said that goes against the city’s use of capping and could create more problems in the future.

“If we cap and overflow students, they’re not guaranteed to go to [PS/IS] 119,” Patterson said.

Once a school reaches an enrollment cap, under the department’s policies, students are placed in any school within the district that has space. This could force Glendale parents to take their children to schools in Corona.

Another sore point from parents was that there are many parents “gaming” the system to admit children who did not live in the zone. One parent said if the students who were not zoned for the school were kicked out, there would no longer be an overcrowding issue.

Community Education Council 24 (CEC 24) President Nick Comaianni said this was a problem throughout the entire district.

Pranzo said the complaint about out-of-zone students was “absolutely true.”

“It’s true because of the Chancellor’s regulations. Quite frankly, the document requirements are quite liberal,” Pranzo said.

The city accepts many forms as proof of residency including current utility bills or payroll receits. Peter Vercessi, vice president of CEC 24, said that in Long Island, where he is a school administrator, the requirements are much stricter.

Both CEC 24 board members and OPM continually stressed that Thursday’s presentation was not a formal rezoning proposal.

With approximately 92 students registered for kindergarten classes this year, the school will not be overcrowded, but Patterson said that number has fluctuated widely in the last few years leading to this discussion.

“We have space right next door. We don’t want to be totally reactive,” Patterson said.