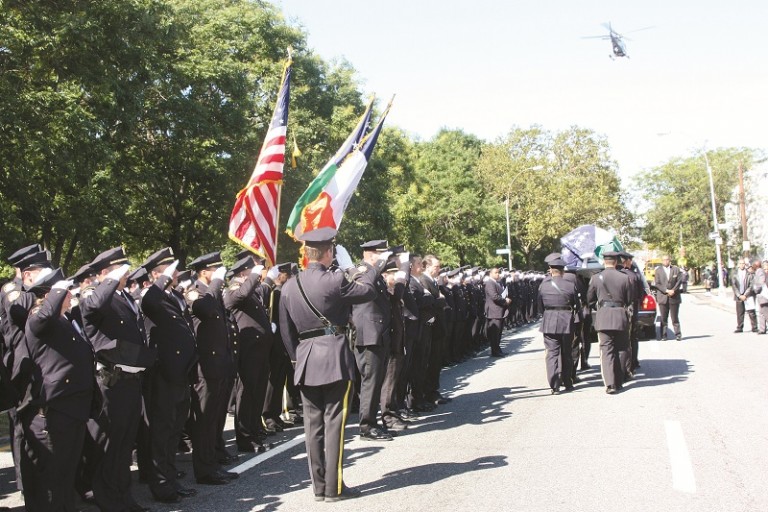 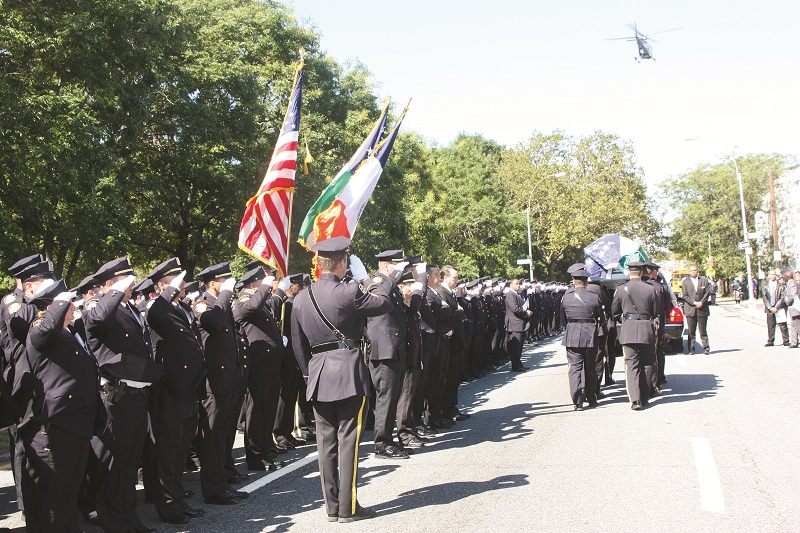 On Friday morning hundreds of uniformed NYPD officers, including the 106th Precinct lined the stretch of the North Conduit outside  Grace Funeral Chapel to pay their respects and lay their brother Officer Kevin Jessup to rest.

Officer Jessup was killed last week when an allegedly drunk driver, 20-year-old Jason Lopez, rear ended his vehicle with such force that he was ejected him from the car. He was travelling with his girlfriend Crystal Simons, who sustained minor injuries in the crash, on the Bethpage Parkway at about 5:30 am.

The couple had come from a busy night of celebration­­–it was Crystal’s birthday­­–and on the way home they stopped by to see fellow officers in Kevin’s precinct at their 9/11 command posts around 3 am. Jessup told fellow officers he and Crystal would end the night with a bite to eat before going home.

Family and friends arrived at the funeral home for the start 9:30 a.m. service which continued for almost two hours. The service concluded with a formal procession and the presentation of the flag to Officer Jessup’s family by his Commanding Officer at the 106th Precinct, Captain Thomas Pascale.

The following is a reprint of Officer Jessup’s obituary, provided by his family:

Kevin James Jessup was born to parents Ron and Dolores Jessup on August 2, 1986 in Brooklyn, New York. He is the older brother of Keith.

Before he became a police officer, Kevin worked at Kennedy Airport as a baggage handler. He was accepted into the NYPD Academy in July of 2008 and graduated that December.

Since the time Kevin was a little boy he always said he wanted to become a police officer. Very few people get to say they were living their dream, but Kevin earned his bragging rights as he said he was doing what he wanted to do. Kevin achieved his goal.

Those who knew him also knew how much Kevin loved music, especially mixing records on his father’s turntables. He was born with a natural talent for “mixing beats” and “scratching” From the time he was four years old, Kevin mastered “scratching” on the turntables better than men five times his age.

In the neighborhood people would come by just to see the little kid who had to stand on a crate to reach the turntable so he could make magic with the records in front of him. As a teenager, Kevin a.k.a dee-jay kblendz, made extra money as a DJ and selling his mix-tapes of old-school jams to family and friends.

Kevin was called home on Sunday, September 11, 2011. He leaves to cherish his memory his father Ron, his mother Dolores, brother Keith, his grandmother Katrine, three aunts: Carol, Sharon and Theresa, two uncles: Clyde and Robert, first cousins: Dominique, Afia, Aleschia, Anthony Erik, Ian, Shaun and his girlfriend Crystal as well as a host of other relatives, good friends and his extended family on blue. We Love You Kevin, but God loved you best. Rest in peace: 3628