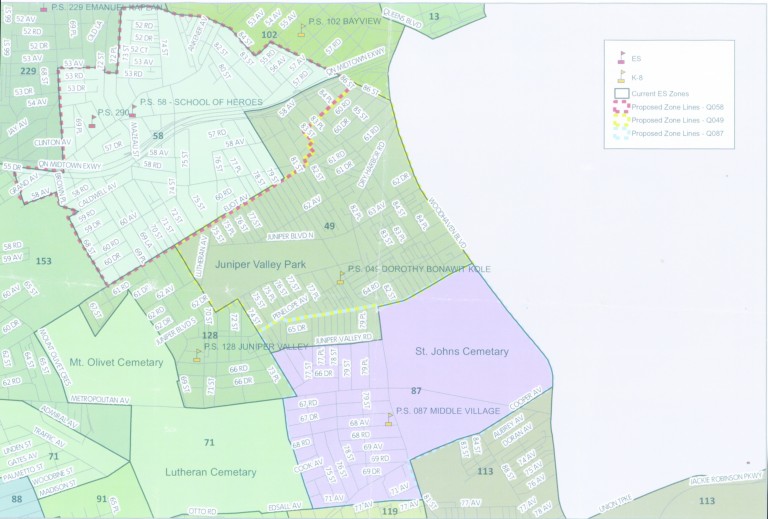 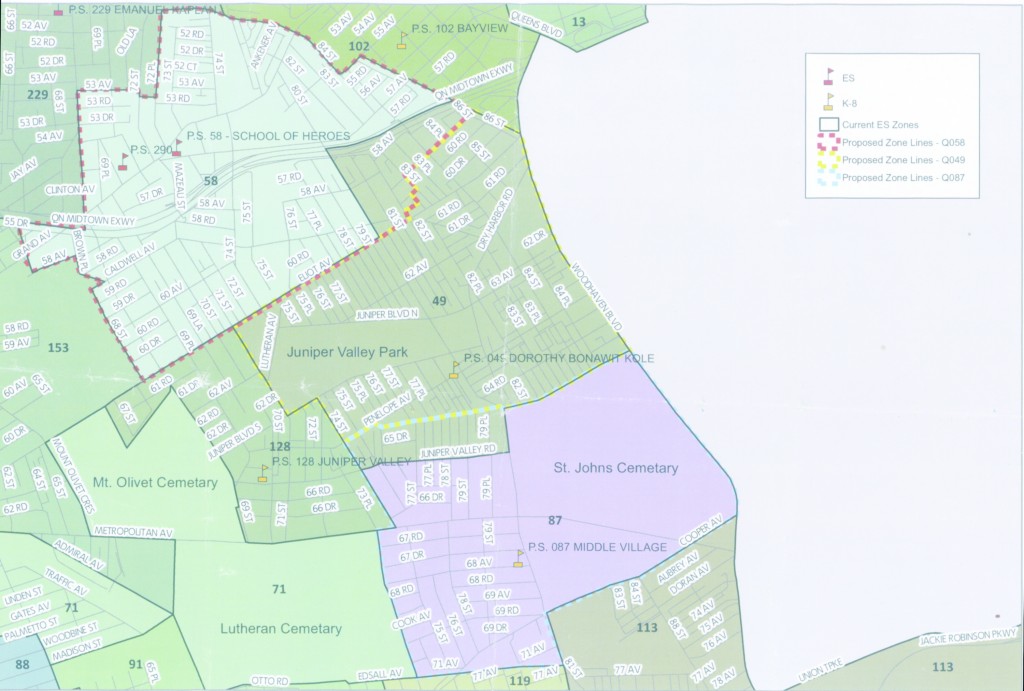 Middle Village’s PS/IS 49 faces a potentially serious overcrowding situation. If incoming kindergarteners continue to enroll in the school at its current pace, local education leaders fear there will simply be no more space.

In an effort to resolve the issue, Community Education Council 24 held a public meeting at the school on Thursday to hear residents’ opinions on a rezoning proposal that would divert incoming students to either PS 58 in Maspeth or PS/IS 87 in Middle Village.
The Department of Education’s Office of Portfolio Management (OPM) gave a presentation to outline the proposal.

Under the plan, the northern and southern section of PS/IS 49’s enrollment zone would become zoned for other schools. In the north, the area bounded by 81st Street and 58th Avenue from 79th Street to the Queens Midtown Expressway would become part of PS 58’s zone. In the south, the area bounded by Furmanville Avenue and Juniper Valley Road from 74th Street to 79th Street would be zoned for PS/IS 87.
Brandi Holten, analyst for OPM, said this plan would alleviate the overcrowding of PS/IS 49 and move incoming kids to nearby schools with open space.

Currently, PS/IS 49 has 1,063 students in the school, with a capacity of only 802 students. PS 58 has 998 students with a total capacity of 1,034 and PS/IS 87 has 554 students with the space to fit 585 students.
According to OPM’s calculations, PS/IS 49 needs 24 students from the kindergarten class to move to one of the other schools. Under the rezoning proposal, their kindergarten enrollment would decrease by 24 to 89 students for next year. Thirteen of those students would go to PS/IS 87 and the rest to PS 58.

The numbers, however, are merely projections based on current demographic data. No currently enrolled student would be forced to switch schools because of a zoning change. Also, younger children who have not yet enrolled but has a sibling in a non-zoned school are given admissions preference.

Anthony Lombardi, principal of PS/IS 49, said that only three eighth grade classes are graduating and his building doesn’t have space to accommodate any more kindergarten students than to replace those classes. Currently, they have 113 kindergarteners enrolled in the school, with one class having 15 kids. He said that he has room for 75 kindergarteners next year.

“We’re doing fine, but we can’t continue at this rate,” Lombardi said.

But one parent disagreed with the rezoning plan and questioned how OPM came up with their calculations.
Allyson Conte, a PS 58 parent, said that the school can’t afford to take on additional students despite their calculations that it has available space.

Conte added that the proposed 11 students that would go to PS 58 are inaccurate because it fails to include high-rise buildings as well as anyone who might move into the area before the next school year.
“This is just an example of the math not adding up,” she said.

CEC 24 President Nick Comaianni also touched on a controversial subject, brought up at last week’s PS/IS 113 rezoning meeting, about the possibility of non-zoned students admitted to the school through fraudulent paperwork. Comaianni said that this is going to continue because he knows that parents will want to send their children to the best school possible.

“Until they change the system, this is where we’re at,” Comaianni said.

CEC 24 Vice President Peter Vercessi, who works as a school administrator in Manhasset, Long Island, said that requirements there are much stricter. Vercessi said that you have to show the house deed or lease and utility bills before you can be admitted into a school.

Thursday’s meeting was informational so the city, CEC and district superintendent could gather public input. But a vote must be made by the board to approve or deny the plan by November.
Comaianni said that the council will take some time to go over the rezoning proposal and that it should be able to meet the November deadline.