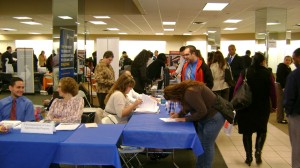 At State Senator Joe Addabbo’s job fair on Friday, thousands of residents came looking for work at a time when the state unemployment is close to eight percent. The fair, at The Shops at Atlas Park in Glendale, was the fourth Senator Addabbo (D-Howard Beach) has sponsored since he took office in 2009. Addabbo said that he hosts these events as a public service to give resi- dents an avenue for finding work. According to the U.S Bureau of Labor Statistics, the current unemployment rate in New York State stands at eight percent. In the past three years, this has been an ongoing problem as the rate was at nine percent in May 2009. “We’re here to give good people, who want to work, a chance to find employment,” Addabbo said. According to a statement from Addabbo’s office, there were 2,400 peo-

ple at the fair applying for roughly 1,300 jobs. Addabbo added that about 3,000 to 4,000 people attended last year’s fair, which was at Aqueduct Racetrack.

Ozone Park resident John A., who did not want his last name to be used, was among the first to stand in line to get into the job fair. He arrived at 7 a.m., three hours before the doors opened.

John said that although he appreciates the chance to apply to multiple jobs in one day, he was a little frustrated that companies at the fair were mostly telling people to apply for open positions on their websites.

“No one is going to give you a firm, ‘We’ll take your resume,’” said John, who has been unemployed since being laid off from JP Morgan Chase last year. He added that he noticed there were many seasonal jobs available at the fair but he was looking for a more permanent position.

Others went to the job fair as an opportunity to jumpstart their professional career.

Oksana Avila, who made the trip from Westbury, Long Island, currently works as a waitress. She is looking for a government job as either an inter- preter or a special agent. She has been looking for work in those fields since she graduated from Hunter College in June.

Opportunities For A Better Tomorrow, a Brooklyn-based nonprofit organization that helps youths in job training and job placement brought some young adults to the event to hand in their resumes and give them the experience of going to a job fair.

Evelyn Ortiz, a youth coordinator with their Opportunity Knocks In- ternship Program, said they brought 30 students, ages 17 to 24, to the fair. For the companies looking to hire new employees, this was their chance to gauge the level of interest for their open positions. Stuart Russell, lead officer for Transportation Security Administration

(TSA), said that he was impressed with the number of people who were qualified for their open positions, and how much they want to find work.

“You could tell by the look on their faces, a lot of people are desperate for jobs,” Russell said.

Russell added that he encourages people to speak to as many people as possible when going to a job fair.

“I advise people to walk around and apply for everything,” Russell said.

After the fair Senator Addabbo noted that some recruiters, including Delta Air Lines, Hillside Honda and New York Community Bancorp, came to his office with positive feedback about the event.

According to Addabbo, another job fair is planned for the fall of 2012.