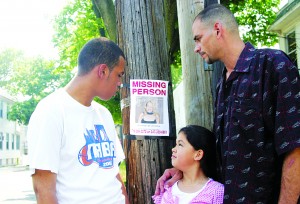 Former Woodhaven resident Edwin Fuentes pleaded guilty Tuesday to choking his wife to death in June 2007 and spreading her remains through Forest Park.

The 44-year-old Fuentes will spend 20 years in prison for manslaughter and tampering with physical evidence. Fuentes admitted he strangled his wife, Reina De Los Santos Reyes, between June 19, 2007, and June 22, inside their apartment at 78-17 88th Road.

As part of the plea deal, Fuentes will lead investigators and a cadaver-sniffing dog to find missing pieces of her body, which he hid in trash bags and suitcases and scattered through the park, Assistant District Attorney Richard Schaeffer said. If Fuentes reneges on that agreement, his sentence will be extended five years.

“The defendant has admitted his guilt to a brutal and grue- some crime that leaves the couple’s now thirteen-year-old daughter coming to terms with the pain of losing her mother and the knowledge that her father was the one responsible for her demise. Though the defendant was able to evade justice for more than two years, the diligence of police and prosecutors in pursuing this case has now ensured that he will serve a lengthy time behind bars for his actions,” District Attorney Robert Brown said in a statement.

The resolution comes almost four and a half years after De Los Santos Reyes disappeared.

In June 2007, Fuentes reported her missing, claiming she never returned after a night out with friends. At the time, officers noted he seemed nervous and shaky as well as having scratches on both arms and a bite mark on his left hand. He explained them away by saying he got them while playing with his children.

Despite his story, officers searched Fuentes home for a body. They went as far as tearing into the interior of his walls, but they found nothing.

Fuentes then began a fruitless search for his dead wife — blanketing the neighborhood with posters and asking for donations to cover the printing. In an interview with The Forum he said there was no reason he could imagine for his wife’s disappearance. “She is a very loving and supportive mother, everyone knows that. I don’t understand where she could be.” He included a message for her, saying, “We love you and we miss you. Just come home safe.”

Almost a year later, on March 4, 2008, four teenagers in Forest Park found a suitcase holding a human skull and other remains. After the coroner identified them as De Los Santos Reyes and performed an autopsy, there was no doubt left: Her death was a homicide.

The DA’s statement details how detectives pieced together a picture of Fuentes’ and De Los Santos Reyes’ relationship.

In a statement to police, Fuentes admitted he was a former butcher, and when officers asked if he thought he would get away with the murder. He replied, “I sure as hell am going to try.”

The night before De Los Santos Reyes’ disappearance, authorities said, the couple had a loud argument. Early the next morning, Fuentes prepared his daughter and stepson for school. He did not let them kiss their mother goodbye — saying she was upstairs sleeping.

They left without speaking to her. When the children returned home from school, De Los Santos Reyes was gone.