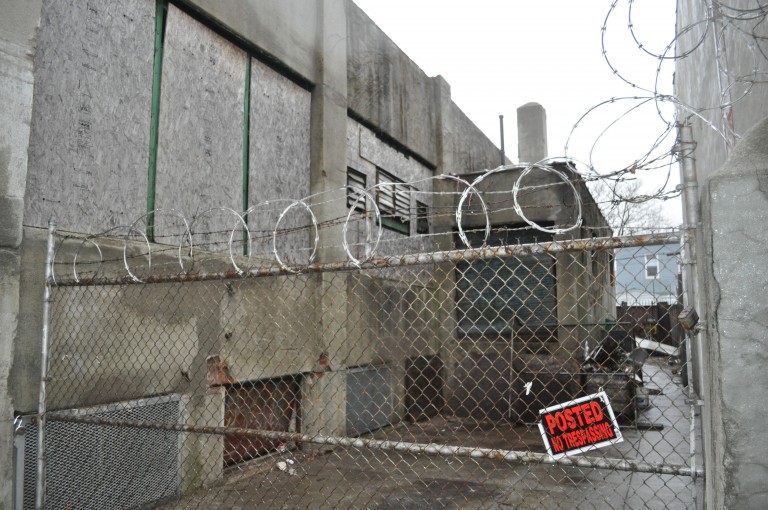 Residents around an abandoned factory in Glendale say unsafe, un-permitted demolition is spilling over their fences and terrorizing them through nights, weekends and holidays.

For years, the industrial building at 70-20 67thPlace sat fallow, but since November, it’s a hive of illicit construction activity, said Gary Jannazzo,who lives adjacent to the property.

Workers have already ripped off the building’s roof and are moving on to windows, all the while dumping debris straight off the roof and over fences and allowing dust, noise and particles to swirl, Jannazzo said.

On Jan. 11, Jannazzo and his next-door neighbor were at Community Board 5, making an open cry for assistance.

“We need help,” he said. “For weeks I can’t open my windows; my kids can’t play in the yard. I’m afraid that they’re going to be breathing in all this junk that they’re throwing off these buildings.”

Jannazzo works in the building industry in Manhattan, and his immediate concern was asbestos coming out of this decades-old building without proper abatement.

CB 5 has been aware of the building since 2003, when the board protested an application for construction on the site, Vincent Arcuri, CB 5 chair, said. But in late November, Arcuri and the board got involved again.

CB 5 District Manager Gary Giordano and Arcuri observed workers violate a stop-work order from the Department of Environmental Protection when CB 5 brought up concerns about asbestos.

When confronted by a DEP representative, workers harassed the inspector to the point police had to be called and force work to stop, Arcuri said. But it didn’t last.

“By the next week, they were back again,” Arcuri said. This time the workers were ready with a dialed phone to the DEP saying the building had received asbestos clearance.

That, however, doesn’t explain what’s being pulled down, built or why. There have been no building permits pulled, according to the Department of Buildings website.

Arcuri added that he also observed the unsafe dumping of debris and work at odd hours.

Four times, complaints to the DOB have been closed because there was no construction or observable violations happening when the inspector arrived.

Jannazzo complained that work is done on weekends, nights and before noon to avoid inspectors.

“It’s something that needs to be taken care of,”Arcuri said. Anyone that wants to help us, we’re open to help.”

On Dec. 28, CB 5 sent a letter to the DOB asking for a review on the status of project and pleading to hear what can be done about the nuisance.

So far, there has been no response, Arcuri said.

A representative from Councilwoman Elizabeth Crowley’s office has reached out to the DOB and the listed owner of the property, Block Five LLC. So far, neither avenue has been successful, Crowley’s spokesperson, Eric Yun, said.

Inquiries to the DOB about the building’s status were not responded to by press time.

Block Five also did not respond to calls for comment.

The man answering the company’s listed phone number said it was a wrong number after being asked about the property in Glendale.

Jannazzo said that the demolition has been quiet for the last week and a half, but his block is still on edge.

“It seems like everybody in the neighborhood it nervous about it,” he said.

The latest complaint about the building was lodged on Christmas Eve at 10 p.m. Once again, an inspector was not able to get onto the property or observe the work.

For the annoyed neighbors who presumably made the complaint, it’s one repetition in a pattern of frustration.

“We don’t know what to do at this point,” Jannazzo said.