Dragons ran amuck in Ozone Park last Monday, but don’t worry–these dragons breathe out money instead of fire. Resorts World Casino gave visitors a taste of Chinese culture as it kicked off its Chinese New Year Extravaganza on Monday afternoon.

The event started with traditional Chinese celebrations, including lion and dragon dances, marching to a drum beat down the Casino’s main entrance on Rockaway Boulevard. Before the mini-parade began, Resorts World Casino President Michael Speller dotted the eyes of the dragons, which signifies the dragon awakening, to officially kick start the celebration. It also included Speller feeding a piece of lettuce to the two dragons. The lettuce signifies money and when the dragon eats the lettuce and spits it out, it means that it is giving out money to the whole world.

The marching continued up the first two floors of the casino and into the Central Park Events Space on the third floor, greeting casino gamblers with loud drum banging and high-pitched cymbal clapping.

According to Christopher Tsou, Director of Asian Player Development at Resorts World New York, the celebration serves as a way for the small Chinese community in Ozone Park to get together to celebrate the upcoming new year. He added that they were hoping to draw people to 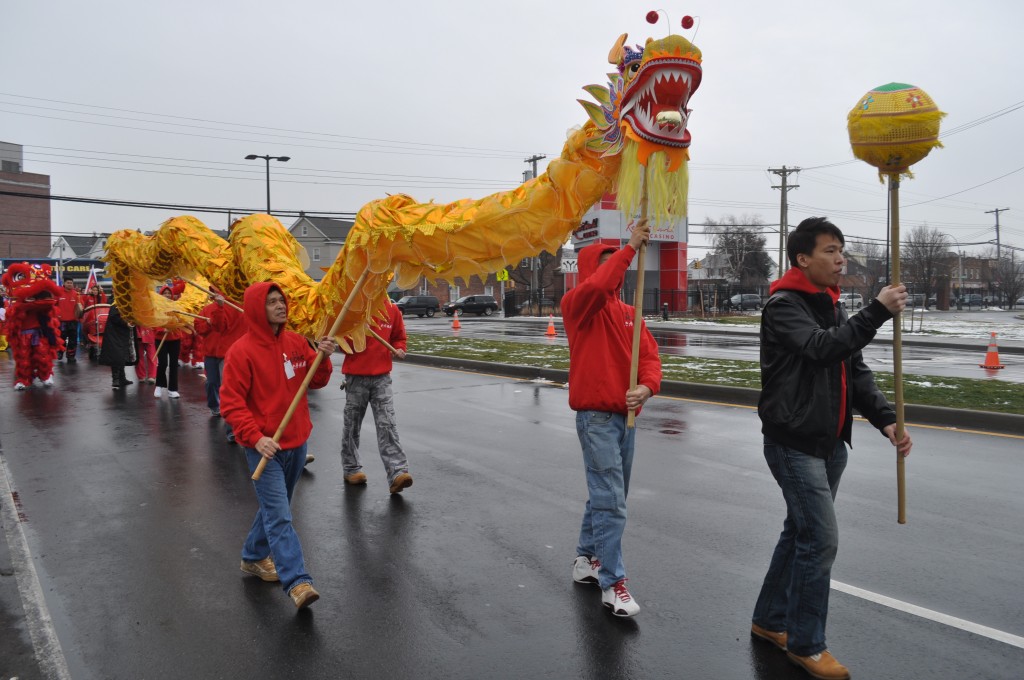 the facility from Flushing, which has a large Asian population.

Tsou said that he, initially, wasn’t sure how the turnout would be for the celebration, which will go on until Feb. 6, but he said that he was satisfied with the crowd that filled the casino’s Central Park Events Space and he hoped that would continue in the remaining two weeks.

“We have people here and hopefully we can build on that as the days go by,” Tsou said.

Speller said that the casino is proud to join the tradition of celebrating the Chinese New Year.

“We are honored to have the opportunity to introduce some of our guests to the Chinese New Year for the very first time, giving them a taste of the culture to which Resorts World and many of the residents of our new community are so strongly connected,” he said.

The Casino also hosted a number of vendors inside its event space, which sold Chinese cuisine and arts and crafts for guests who attended the festivities.

To go along with the New Year celebration, Resorts World will also have a float in the 13th annual Chinatown Lunar New Year Parade & Festival, which will be on Sunday, Jan. 29 in lower Manhattan.