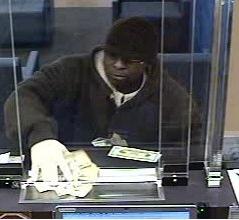 Police are asking for help locating a man who robbed a bank in Maspeth on Saturday, Feb. 4.

An NYPD spokesperson said the suspect entered a Chasebank at 69-55 Grand Avenue and passed a note demanding money to a teller. The employee handed over an unknown amount of cash and the suspect fled.

Between Jan. 14 and Jan. 24, men robbed four more banks in the 104th Precinct. The crimes followed the same pattern where a suspect used notes to extract money.

Three banks were hit along Metropolitan Avenue in Middle Village about two miles away from the Chase in Maspeth. The fourth was at 66-77 Fresh Pond Road.

However, police described two other suspects, a Hispanic man and a white man in connection with those robberies.

The NYPD spokesperson said Saturday’s robbery is not being investigated as part of a pattern.

Anyone with information should call NYPD’s anonymous Crime Stoppers hotline at (800)577-TIPS. You can also submit tips online at www.nypdcrimestoppers.com or via text messageto 274637 (CRIMES) then enter TIP577.

Photo Courtesy of the NYPD