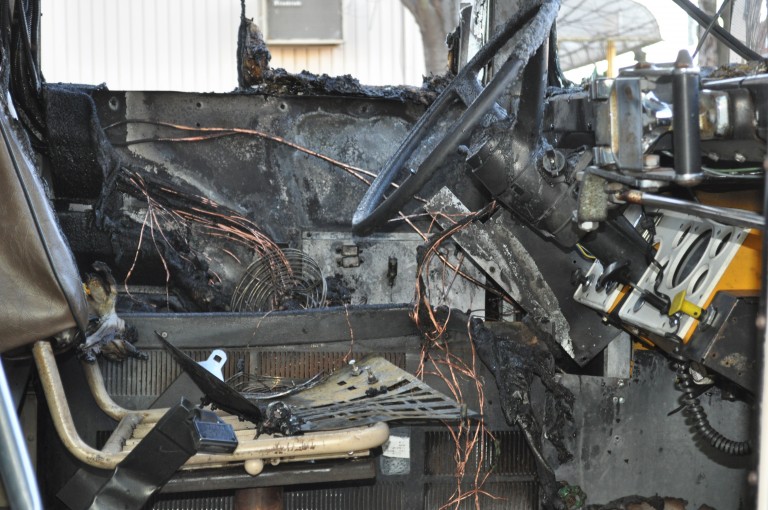 Calvin Covington was driving a bus full of sixth-graders home from I.S. 77 in Ridgewood when he smelled smoke.

He passed Eliot Avenue on Fresh Pond Road and dismissed the smell as coming from the gas station there, but after driving another mile, the smell persisted and he recognized the acrid scent of wires burning.

He pulled over as soon as he could at 74th Street and 58th Avenue in Maspeth and started filing 28 kids off his bus, still not sure what was causing the smell.

As soon as they all the students were out, Covington saw the smoke, he said. It was coming from underneath the driver seat where the battery and wiring for the bus’s stop sign lights are.

Soon after, flames were licking his chair and crawling toward the back of the bus.

Andreas Goustas saw the smoke from his apartment’s balcony and rushed down with a fire extinguisher.

“I was just hoping none of the kids were still in there,” Goustas said.

They had all escaped though and were running around in the apartment building’s driveway while neighbors watched over them.

Meanwhile, Goustas and Covington tried to put out the fire.

The smoke drove them back, Goustas said, but the FDNY was there in a few minutes and put the flames to bed for good.

Goustas was frustrated he couldn’t get the NYPD to respond, but he and Covington were overall relieved nobody was hurt.

Covington said he didn’t think much of it when he pulled the bus over. He just wanted to make sure his passengers were safe.

“That’s what I would do if it were my kids,” he said. Covington, 32, has three children who aren’t quite old enough for intermediate school—a 9-year-old and 6-year-old twins.

A few minutes later, the I.S. 77 students filed onto another yellow bus that had just arrived.

Covington surveyed the damage as he waited for a tow truck to come for his bus. The only casualties were a few book bags and his snack.

“I just bought my cashew nuts. I didn’t even get to eat them,” he laughed. “They’re roasted now.”