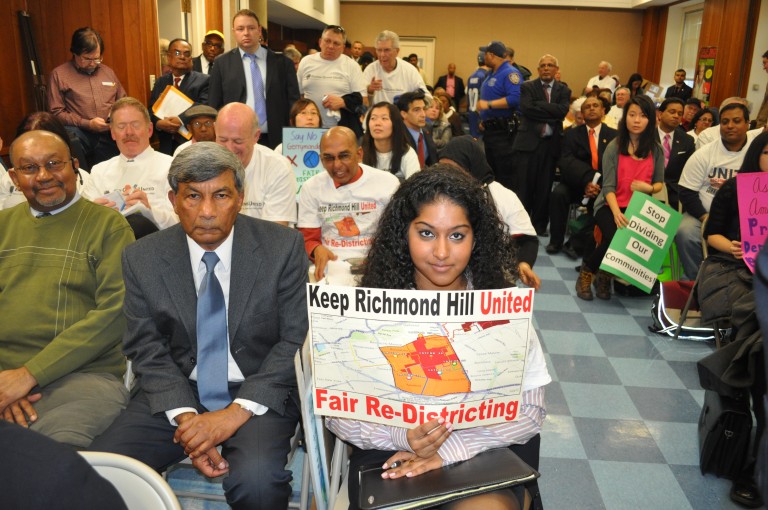 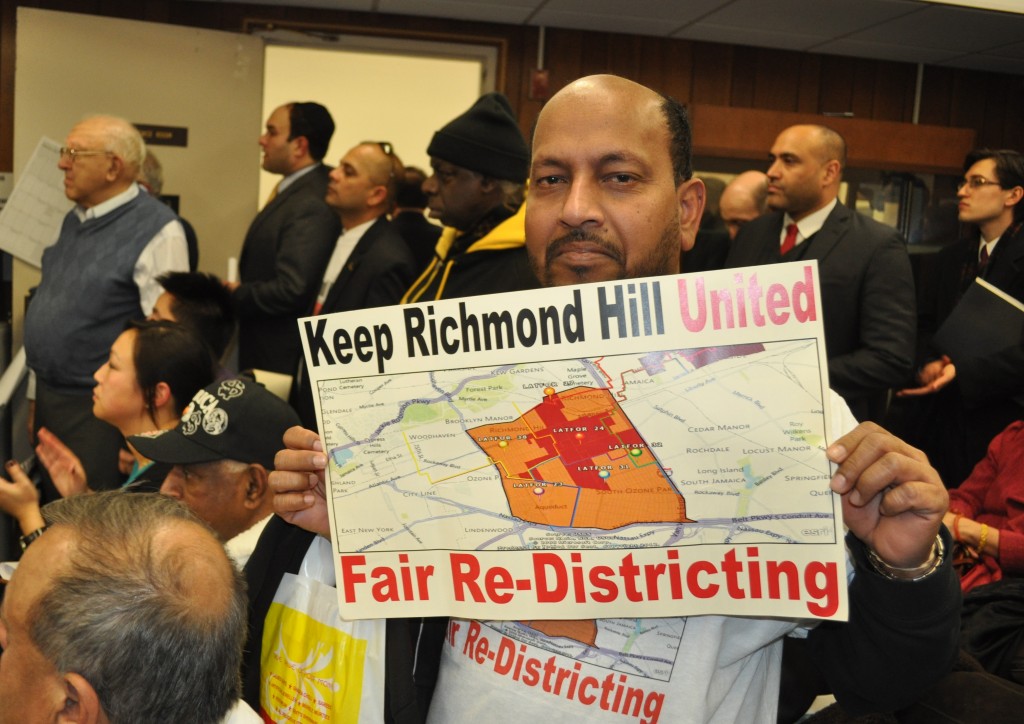 A parade of angry speakers vented at a public hearing on the state’s political redistricting plan that has riled politicians and residents who feel their communities are being split.

“Your proposed maps have created an unprecedented level of resentment toward the political process and disenchantment with the status quo,” said Ali Najmi, a community organizer advocating united representation for Richmond Hill and Ozone Park.

More than 100 speakers signed up to voice their opinions at Queens Borough Hall Tuesday where the Legislative Task Forceon Demographic Research and Reapportionment (LATFOR) heard testimony.

The taskforce was taking opinions from locals on the plan that redraws lines for New York State Senate and Assembly districts.

At one point, State Senator Tony Avella (D-Northeast Queens) got into a heated exchange with LATFOR members when he said the current maps and partisan process to draw them are a disgrace.

Co-Chair Senator Michael Nozzolio (R-Auburn) pressed Avella for specific examples, and while Avella brushed off the request, others were happy to oblige.

Ozone Park, Richmond Hill and South Ozone Park had a large contingent show up who advocated keeping the communities in one block.

Najmi, represented SEVA, a nonprofit focused on serving the South Asian and West Indian populations of Richmond Hill, Ozone Park, and Woodhaven. He said the proposed districts area failure because they split up next-door neighborhoods into five Assembly districts and two Senate districts.

“This entire taskforce has failed the people of New York and allof you should be exiled to New Jersey,” Najmi said.

The new Senate district 15, currently held by Democrat Joe Addabbo, has also received ridicule. It removes parts of OzonePark, Woodhaven and Richmond Hill from his prevue and gives him half of the Rockaways instead.

“Districts should be more continuous,” Addabbo said at a community meeting  Tuesday. “It looks like spin art, basically. It looks like somebody threw ink on a map and just spun it out and wherever it landed, it landed.”

At the hearing, though, Addabbo’s district was one of few to receive at least some praise.

“It is clear you’ve done diligence, researched that part of queens and put together a district that unites communities of interest,”said Tony Nunziato, a Maspeth resident. “I’m impressed that you kept Maspeth, Middle Village, Glendale, Howard Beach and the Rockaways together. These neighborhoods are very similar to mine. The only thing that separates us is water.”

Nunziato said the new 30th Assembly district looks like a“robo-dog” and tries to packaged part of the Middle Village and Maspeth area with dis similar neighborhoods to the north.

“You left out half the town of Middle Village and the appendage of Woodside, Sunnyside and Astoria are just hanging there,”he said.

Democratic Senator Michael Gianaris, who has been a vocal opponent of the proposed districts, was one of the first to speak.

“Today you are being called out,” Gianaris said. “Called out for your disgraceful manipulation of the democratic process that prevents communities throughout this state from achieving there presentation their numbers warrant”

Gianaris’ district, 12, is situated around the Astoria and Sunnyside area. It has a narrow swath that reaches down to part of Glendale.

In the proposed lines, an even smaller tendril reaches down to pieces of Ozone Park and pieces near Astoria and Sunnyside are taken away in a way that Gianaris’ home falls outside the district.

“It is clear that the Senate Republicans’ aim is to use blatant gerrymanders like that as straw men to distract the public fromyour true intentions: to create artificial problems that can be generously solved in your next draft while still achieving the disenfranchisementthat is the ultimate goal,” Gianaris said.