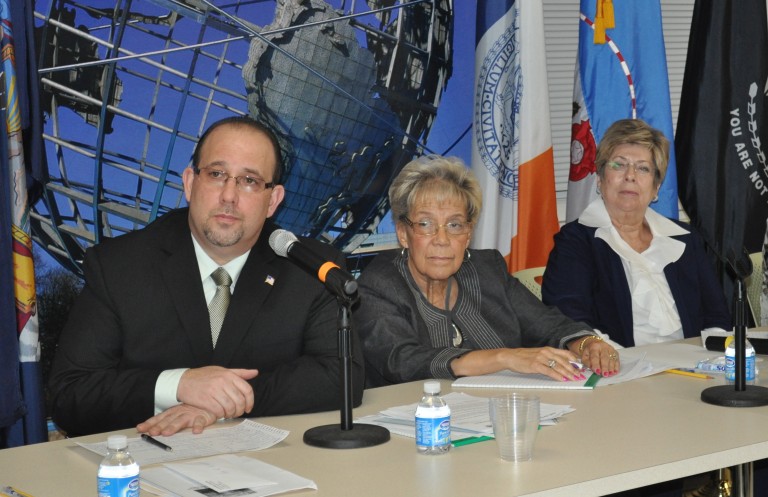 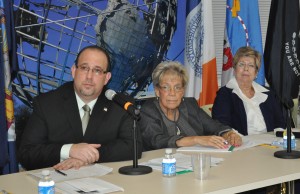 The Queens representative to the Panel for Educational Policy Dmytro Fedkowskyj, left, and Queens Borough President Helen Marshall, center, listened to dozens of parents, students and teachers trash a Department of Education plan to replace half the teachers at eight Queens schools.

Grover Cleveland High School’s assistant principal Michelle Robertson bellowed at Mayor Michael Bloomberg. An immigrant from Barbados herself, she told the mayor about students in her English class who arrive not knowing how to speak the language—and a year later, pass the state’s English Reagents Exam.

She yelled out how the largely immigrant population at her school in Ridgewood competes with specialized high schools in math and science contests.

Bloomberg was not in the room or at Queens Borough Hall on Monday night. But Robertson and dozens of students, parents and teachers lined up for a public hearing regardless, to tell him they wouldn’t let their schools close without a fight.

It was an uninterrupted two hours of frothing criticism of the Department of Education’s “turnaround” plan that would close and reopen eight schools in Queens after replacing 50 percent of the teachers.

Marie Senat, from John Adams High School in Ozone Park, brought a petition signed by her classmates asking the DOE to reconsider replacing their teachers.

Last year, these 33 schools became eligible for $58 million in state and federal grant money after being designated “persistently lowest achieving” (PLA) because of consistently low graduation rates and test scores.

To receive the money, schools had to institute one of four federally approved reform plans. They included rigorous staff and curriculum changes, becoming a charter school or simply closing.

However, state Education Commissioner John B. King and Gov. Andrew Cuomo announced a new requirement. They said grant funding and any other new funding would not make it to schools if districts did not implement teacher evaluation systems.

Negotiations on evaluations between the Bloomberg administration and the United Federation of Teachers stalled in early January. They are deadlocked because teachers insist on an appeals process that does not stop with the principal of each school.

But in mid January, Bloomberg moved unilaterally on at least some schools.

In his State of the City address last month, the mayor announced there would be a new reform model for the 33 PLA schools. It’s designed to go around the UFT and grab the $58 million grant.

He and the Department of Education chose to implement the turnaround model, one of the federally approved reform plans.

Along with other requirements, the plan includes temporarily closing the school, renaming it, hiring a new principal and replacing exactly half of the teachers. It’s the only approved plan that requires replacing a percentage of teachers.

Bloomberg argues if these 33 schools evaluate their entire staff and replace 50 percent, they have implemented some form of teacher evaluations and are therefore eligible for the $58 million.

“I’m here to tell you today that we have a bully in the playground, and his name is Mayor Michael Bloomberg,” said Russell Nitchman, a teacher at Grover Cleveland. “I don’t know if us being here tonight is going to change anything. I hope it will. We need some political power to go against this bully in the playground.”

Nitchman and other attendees took little solace in the DOE’s promise that teachers removed from schools will not be fired, just reassigned.

They also criticized the plan because it does not solve the deadlock about a permanent evaluation system.

The DOE has yet to release exact details on the turnaround plan, but the Panel for Educational Policy (PEP) is scheduled to vote on it in April.

He’s hoping other boroughs follow his example in an effort to highlight community resistance.

He acknowledged that fighting the mayor be a losing battle though. The PEP is comprised of five local appointees—one from each borough president—and eight mayoral appointees.

At the last meeting, a proposal about bus service from Fedkowskyj was voted down 8-5, exactly along those lines.

“I like a fight and love to win, but will not back down when my back is up against the wall,” he said after the hearing.

Marshall is a former teacher, and even she took a turn in bashing the plan, saying educational decision should not be left with politicians.

“It’s not change; it’s destruction,” she said of the turnaround model.

That frustration rang throughout the meeting that became more raucous as time went on. It ended with Robertson’s impassioned speech, shaming Bloomberg for targeting Grover Cleveland.

For two minutes, she whipped the room into a frenzy with her rhythmically-delivered testimony, ending in a shouted rebuke of the DOE’s plan.

“Mayor Bloomberg, I want to tell you, you ought to turn around, and we are going to turn around what it is you are doing,” she said.

Early this morning, Gov. Andrew Cuomo and the New York State United Teachers union reached an agreement implementing teacher evaluations for the state and hammered out a appeals process that could apply in New York City.

If the United Federation of Teachers and Mayor Michael Bloomberg’s administration can agree on implementing an overall teacher evaluation system in New York City by Jan. 17, 2013, the state’s appeals process will automatically be included.

The appeal was the most contentious part of evaluation negotiations between the Department of Education and the UFT.

Despite this, a statement from Bloomberg implies the turnaround plan is still moving full speed ahead.

“Let me make two points. First, nothing in this deal prevents us from moving forward with our plan to replace the lowest-performing teachers in 33 of our most struggling schools so we can immediately begin turning them around and giving our students the support they need,” he said. “And second: While there are still issues that the city and UFT will be discussing in order to finalize an evaluation system, this resolves the lion’s share of the most difficult issues. And the details remain to be worked out by staffs, but keep in mind, the UFT and the city are always talking and there are always things that we are coming to agreements on.”

Michael Mulgrew, UFT president, also issued a statement—praising the governor while taking a swipe at the mayor and Schools Chancellor Dennis Walcott.

“I want to thank the Governor for his efforts to find a similar resolution for the issues that separate the UFT and Mayor Bloomberg,” he said. “Chancellor Walcott’s asserted that the city needed to close 33 [School Improvement Grant] schools because there was no agreement possible on an appeals process for teachers. That process has now been laid out for the SIG schools. Despite this agreement, Mayor Bloomberg still seems determined to close those schools.”