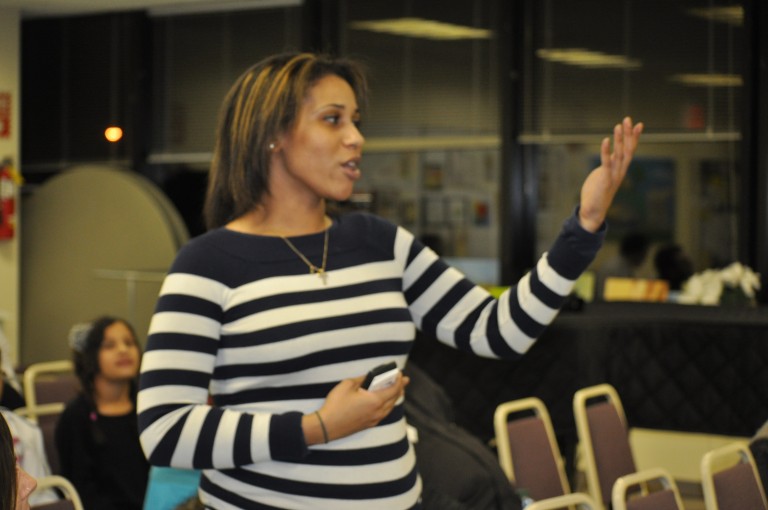 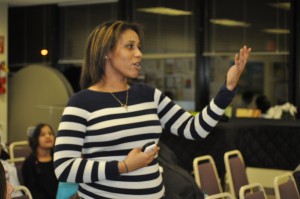 Marlena Starace, Leadership Development Specialist at JHS 190 in Forest Hills, returned to CB 6 this month to thank them for their support since news came out last month that the school might lose its after-school program.

Community Board 6 announced their capital and expense budget for 2013 at their monthly meeting on Feb. 8, which aims at saving a local school program that could disappear at the end of the 2011-12 school year.

Each year, the board must put together a list of 10 local items that they believe need additional funding for the 2013 fiscal year. The board submits this list to the state government.

This year, the board put more funding for the Beacon school program at Junior High School 190 at the top of the list.
News came out last month that the Beacon after school program could close down at the Forest Hills-based school in June if it does not receive funding. The school is one of 16 that could lose its Beacon program. Of those 16 schools, seven will have their programs cut.

CB 6 District Manager Frank Gulluscio said at the meeting that the board moved the funding of the program to the top of the list in hopes of garnering attention from local officials and community members.
“We believe we’re being penalized because of our zip code,” said Gulluscio, referencing why the JHS 190 beacon program is in danger. The NYC Department of Youth and Community Development based its list on zip codes that it considers to be in a “lowest need” region.

Marlena Starace, who is the leadership development specialist of the Beacon Program at JHS 190, attended the board meeting and thanked the community for their support. She said that they’re going to continue to fight for the program to remain open.

Also on the budget items list is funding for additional staffing of the libraries that are in CB 6. Chairman Joseph Hennessy expressed concern that the city wants to cut library service for 2013. According to Hennessy, there is a proposed $26.7 million cut to the city’s libraries for the next fiscal year. Hennessy said that this would force the libraries to cut down on the days it is open and it would have to let go of some of its staff. He said that this would also affect kids who use the library’s computers for research.

“We can’t stand for cuts in the library,” Hennessy said. “Our libraries are crowded, and yet, they’re going to turn around and cut that.”

Also during the meeting, CB 6 board member Joseph Fox announced that he would no longer be a part of the board, which he was a member of for seven years.

Fox said that the reason he’s leaving is because he no longer can balance his duties of President of the Forest Hills Jewish Center and CB 6 board member. Hennessy let Fox adjourn what would be his last meeting. Other board members gave him congratulatory hugs and handshakes and wished him luck in the future.
The next CB 6 meeting will take place on Wednesday, Mar. 14 at the Rego Park Center at 61-35 Junction Boulevard in Rego Park instead of their usual meeting place in Kew Gardens. The reason for the change of venue is because the board will host a Department of Transportation presentation on traffic calming proposals on 62nd Drive and 63rd Road and the surrounding area.