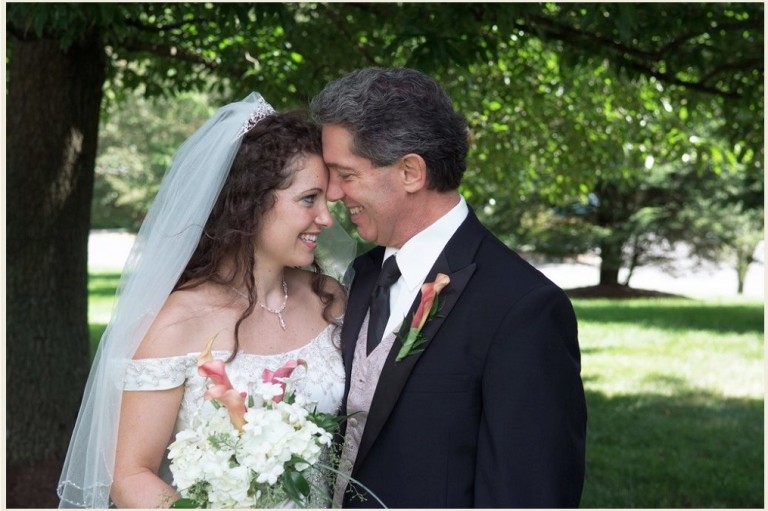 Click here to flip through The Forum’s first Bridal Guide in its entirety.

Shon Poiesz shares a moment with father Bruce Carney at her June 2009 wedding.

Back in the day, the father-daughter dance at a wedding had a bit more concrete meaning than it does today. Then, the festivities would begin with the father leading his daughter out onto the dance floor. At some point in the intricate dance, the father would pass his daughter off to her new husband, who would dance her away. The pass symbolized the father’s acceptance of the groom’s suitability, and his willingness to let his daughter leave his home, and take her place in her new household.

While it’s not quite so literal now, the father-daughter dance is still a very important part of many weddings. Turns out no matter how liberated we are, our fathers still want to make sure we’ll always have someone who can take care of us – whether or not we think we need it.

So, what do you want out of the father-daughter dance at your wedding?

Some brides just pick a song, left foot, right foot, twirl, smile – done! Others go for the all-out, professionally choreographed, meticulously rehearsed father-daughter dance extravaganza. The key to getting what you want out of the moment is to think about what it means to you – and to your dad.

Some brides use this as a chance to relive a special memory they share. Bride Gina Petti, who intends to become Mrs. Todd Cooper in May, chose an untraditional song to dance to with her father. They’ll be twirling to “House at Pooh Corner” by Kenny Loggins and Jimmy Messina. The song tells the story of Christopher Robin and Winnie the
Pooh, but it holds special meaning for Gina and her dad.

“He and I used to sing this song together all the time, when I was a kid,” Gina said. “I have many fond memories of my dad and I, all the way from when I was 5 or 6 until now, singing it together.”

Of course, even the most carefully planned moments can go awry. The lights go dim, the DJ announces your name, your father takes you in his arms for your last dance as daddy’s little girl… and the wrong song comes on. This nightmare was a reality for Marisa Ricciardi. Many brides would have stopped, panicked or freaked out, but Marisa carried it off
beautifully and didn’t miss a beat – most of the guests never even knew anything was wrong. 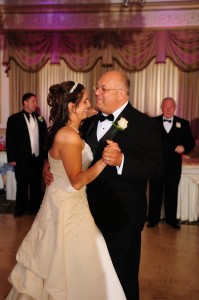 Marisa dances with her father Michael at her wedding. Can you tell if this was the dance when the wrong song played? Exactly, and neither could any of the guests.

Marisa had wanted to dance to “It Won’t Be Like This for Long” by Darius Rucker, a song she and her father had found about a dad watching his daughter grow up. Instead, a different Rucker song played, to Marisa’s dismay. She and her father did dance to the song they had chosen later, and luckily, both had a sense of humor about it. Thanks to a good videographer and a little dubbing, Marisa can now watch the correct music play during her official father-daughter dance – and she’s learned to never underestimate the value of a little good old fashioned damage control.

Sometimes a bride’s father can’t dance, for reasons beyond his control. Sometimes he just won’t. Either way, that’s no reason he can’t have a special moment with his daughter at her wedding. Heather McCollum’s father has a degenerative muscle disease, so she was unsure if he would even be able to walk her down the aisle.

Luckily, on a warm day in June 2010, he was able to walk his little girl down the aisle, in beautifully dignified fashion. Rather than trying to push the issue with a dance, however, Heather decided to give her father free rein to tell a story at the reception instead. It worked perfectly for the two of them (though she was thankful for her waterproof mascara), but if you decide to try out a different father-daughter moment at your wedding, do make sure it’s something both of you are comfortable with.

And, of course, sometimes fairytales really do come true. Shon Poiesz, nee Carney, had a true dream moment at her wedding. She and her father have given each other nose kisses whenever they say hello or goodbye for as long as she can remember. So when she heard the song “Butterfly Kisses” by Bob Carlisle as a teen, she knew that would be the song they would dance to. And the moment went off flawlessly. Both father and daughter were bawling like babies, but Shon said afterward the dance was everything she had hoped it would be, and a moment she would treasure always.

None of the brides here rehearsed their dances with their fathers, but some do. Gina said she’s willing to put in the time, especially if her dad ever seems uncomfortable with it. And I know my dad will be practicing before my big day – he’s already told me, and I’m not even planning one yet.

So don’t forget ladies, you’re the brides, and this is your day. But don’t forget that, for this dance at least, it’s Daddy’s day too.