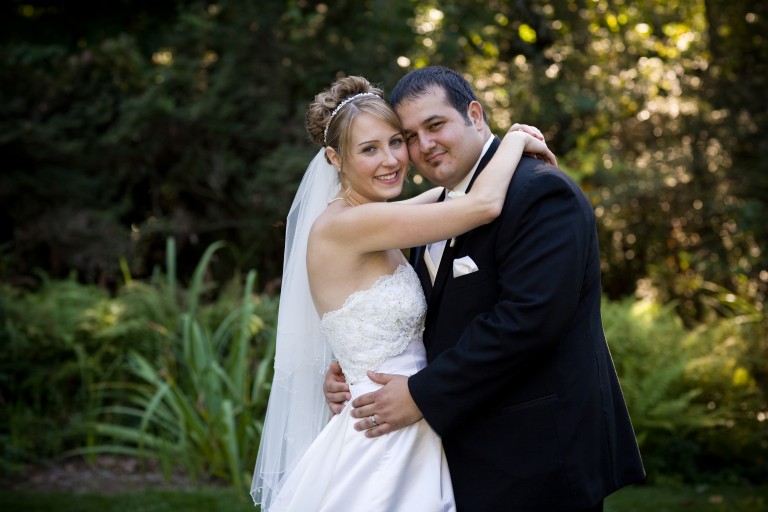 Click here to flip through The Forum’s first Bridal Guide in its entirety. 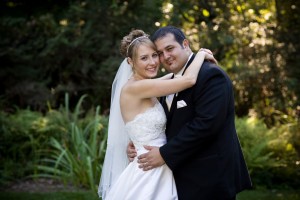 We’ve all heard the stories. Love at first sight. High school sweethearts reunited years later. They accidentally collided on the street and instantly knew. But seriously? Are people just making this stuff up, or does this happen to real people? How does any bride really know she’s found the one for her?

Some brides know instantly. Others have to be convinced over years.
Marisa Ricciardi knew Kevin Daly was the man for her shortly after they started dating. She laughs about it now, but the two met over the Internet. It was her first attempt at online dating, and within three months, she knew he was the one for her.
“For the first time, he was a person I could imagine changing my last name for,” she said. They were married on Aug. 1, 2010.
Shon Carney and Ben Poiesz knew each other since grade school, but didn’t start dating until they were about to head to different colleges. They survived the long-distance thing, perhaps because they really do have something special.

Shon knew early on that this one was different. “He was unlike any guy I had ever dated and we just seemed to have a different kind of connection,” she said, “By six months into our relationship, I was positive he would be the man I would marry.” 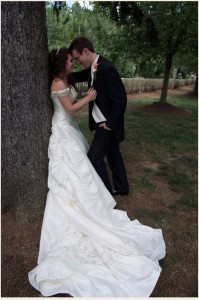 Though it took Ben a bit longer to come around, he proposed after they had been dating for about five years, and they were married in a breathtaking sun-drenched courtyard on Aug. 9, 2008, surrounded by a close group of family and friends.

Sometimes, it creeps up on you. Heather McCollum said she knew Eric Breitbart was the one for her when one day she couldn’t picture her life without him. When he proposed on a Manhattan pier after a dinner at her favorite restaurant, there was no doubt in her mind that he was the man for her.
They were married in an outdoor ceremony on June 13, 2010. The ceremony itself was sunny, but the sky burst into a downpour moments after the ceremony, so it was a good thing the reception had been scheduled to be held inside. There’s an old tradition that says rain on one’s wedding day is good luck. The two are still happy today, so perhaps there’s some truth to it.
Not every love story runs as smoothly. Bride Gina Petti knew Todd Cooper for years before she had any idea that he might be the one. In fact, they broke up for several years. They remained friends throughout the break and rekindled their relationship after college. Gina and Todd will be married on May 12.
While it may have taken her a while to come to the realization, Gina couldn’t be more sure now that Todd is the one for her. “I know he is the one for me because he makes me smile and laugh. We have a lot in common, and debate happily over what we don’t have in common. He’s smart, and teaches me things instead of making me feel dumb. When I’m stressed, which happens a lot, he knows when to help, and when to give me space,” she said.

Shon said she and her husband-to-be, Ben, chose the few things that were really important to them early on and then allocated most of their budget towards those things. Her top three were the wedding dress, the photographer and the reception. Ben’s number one priority was the food. By choosing flowers based on what was in season and having friends do Shon’s hair and makeup the day of, the couple was able to allot more funds towards a truly delicious feast that included tastes from around the world.
All of the brides agreed one very easy way to save a lot of money is to opt for an off-peak time for your ceremony. Shon fell in love with her reception hall (after she fell in love with Ben, of course), but it was a bit on the pricey end of her spectrum, so she and Ben were married in a beautiful sun-soaked afternoon ceremony instead of an evening ceremony, as originally hoped for. By doing this, Shon said she saved about $50 a plate, which adds up to big savings!
Marisa saved in a similar way, by having her wedding on a Sunday night instead of a Saturday. She also saved big by cutting back a lot on live flowers. She used arrangements of fabric flowers provided by the catering hall for her centerpieces, to avoid spending a lot on something that people will only see for a brief time anyway, during dinner.
“The only flowers I cared about were my bouquet, my bridesmaids’ bouquets, the flower girl and the rest of the wedding party. Flowers die, and they are
expensive!” she said.

Heather agrees with the point Marisa’s really getting at here, “Your wedding should reflect who you are, so don’t feel the need to spend money on things that you normally wouldn’t. If you and your fiance aren’t the partying type, you probably don’t need a huge dance floor and a DJ. If you prefer your flowers to be on a printed scarf rather than in a vase, don’t spend a fortune on floral centerpieces.”

Some brides seem made to DIY, using beer they hand-brewed themselves for favors, self-addressing invitation envelopes, making shockingly realistic flowers out of fabric, paper, food items… and then there are those of us who can’t fold a napkin properly.

Gina is a bride of the first variety. She’ll be brewing beer for favors (really), trying her hand at stationary addressing and tackling anything else that comes up. But in addition to being a budding Martha Stewart (mixed with a wee bit of Samuel Adams, it seems), Gina is a planner. She set up an automatic transfer so that every time she got paid $100 would go into a special wedding account. She has a part-time job as well, so everything from that goes right into the wedding fund. Gina’s figured out the trick to being a successful, relaxed DIY bride – don’t leave anything until the last minute, no matter how tempting it may be.

Stef Dipple made all her own centerpieces the day before the wedding, decorated the entryway staircase at the reception hall, and packaged her romantic favors (heart-shaped cookie cutters) herself, with the help of friends and family. Everything turned out as imagined, but Stef did learn a valuable lesson.
“If someone offers their help, take it! They wouldn’t have offered if they didn’t mean it,” she reflects now.
Stef and love-of-her-life Paul Hickman were married in a poolside ceremony on June 27, 2009.
Bride Lauren Wospil went a similar route, saving by purchasing all the little things she needed a lot of – bubbles, ribbon, favor bags, and the like at large craft stores like Micheal’s and A.C. Moore. She said while she did save a lot this way, it was also a lot of work – in order to really get the big savings this way, you have to time your big purchases with store coupons, and really plan ahead.

All that planning paid off for Lauren, when she married Gene Rossi in a stunning Roman Catholic ceremony followed by a reception with a relaxed, luxurious feel on Sept.19, 2009.

The brides all agreed that, no matter your DIY track record, there are definitely pieces of your wedding you can do yourself – as long as you allow for careful planning ahead. Leave yourself more than enough time to complete whatever tasks need doing, and still enough time to really savor your wedding. It’s supposed to be a celebration of your love after all, so focus on what matters – you and him.