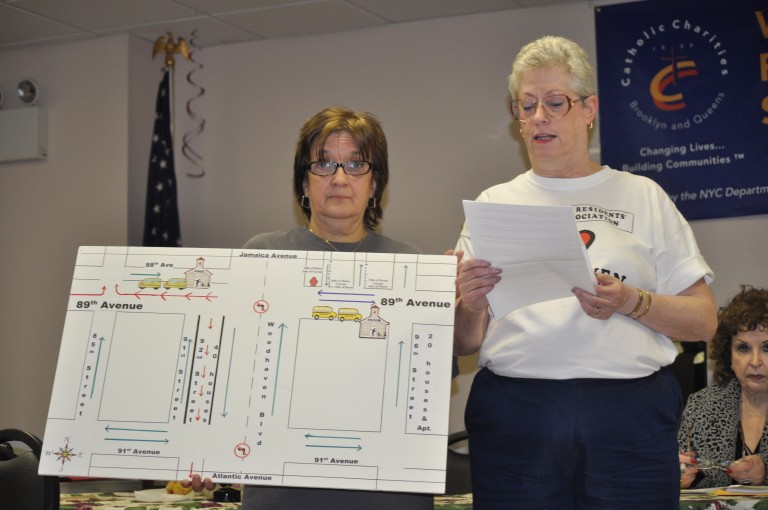 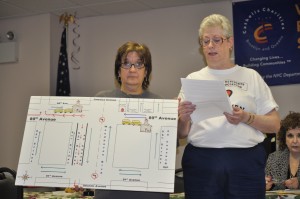 Woodhaven Resident Margaret Finnegan (right) spoke against converting 89th Avenue from a two-way street to a one-way street going eastbound between Woodhaven Boulevard and 97th Street at the Community Board 9 meeting on Tuesday, March 13th.

Packed into a small room with barely enough seating to accommodate the large turnout of residents, Community Board 9 finally voted on three important issues, that had been tabled for two months. The meeting, on March 13, also featured a change in leadership of the board.

CB 9 unanimously voted to approve a Woodhaven and Richmond Hill rezoning plan that affects 229 blocks in those two neighborhoods.

While that plan did get approval from the board, it also unanimously voted no on two street conversions. The first would have converted 89th Avenue from a two way street to a one-way street going eastbound between Woodhaven Boulevard and 97th Street. The other would have changed 84th Street from a one-way northbound to a one-way southbound
going from Liberty Avenue to Atlantic Avenue.

Before the vote, residents were given a chance to express their concerns.

Margaret Finnegan, who has lived on 92nd Street in Woodhaven for 41 years, spoke against the proposed 89th Avenue conversion and came with an illustration of the intersection to visualize her position. She said if that proposed change was approved residents that live on her block would have to drive north on Atlantic Avenue, on 91st Street, to 89th Avenue
and make an illegal turn on 91st Street to drive one block to get back onto 92nd Street. Her other option, she said, would be to drive three blocks north to Jamaica Avenue, make a southbound u-turn and turn onto 89th Avenue from the service road.

“It’s funny how the city wants to stop pollution but this plan would inconvenience drivers and encourage use of more fuel to get into our homes,” Finnegan said. “This is poor city and environmental planning.”

Sal Congemi, who has a house on the corner of 92nd Street and 89th Avenue, agreed with Finnegan, saying that if you make the area of the street where P.S 60 is a one-way street, people would have to go down to Jamaica Avenue to make the left from the service road to get to where the school is, rather than making one simple turn.

Other people, like Ozone Park resident Charles Jensen, chose to speak about the 84th Street conversion. Jensen, who is a member of the Our Neighbors of Ozone Park Civic Association, said that he feels that the people in Woodhaven are trying to influence what goes on in Ozone Park and that, when deciding on a street change that affects multiple communities, the people that would be affected the most by the change should have the most say. He concluded by saying that although he doesn’t live on 84th Street, he believes that their concerns should be paramount when voting on the issue.

But Ed Wendell, president of the Woodhaven Residents Block Association, disagreed with Jensen, saying that if a street change happened, it would affect both communities equally.

“You could build a brick wall in front of someone’s driveway and claim it doesn’t affect the driveway. It does,” Wendell said. “This change affects us.”

He said that a change in street direction of 84th Street would eliminate one of the only roads back into Woodhaven besides Woodhaven Boulevard. He added that many people are firmly against these changes and he hasn’t heard anybody who is in support of the road changes.

The rezoning plan fared a bit better at the meeting. Since the board voted its approval, the 229 blocks in the Woodhaven-Richmond Hill will now have zoning that the Department of Planning (DOP) hopes will reinforce the neighborhood’s character and establish building patterns.

According to Brandon Pillar, a representative from the DOP who gave a presentation on the rezoning plan before the board voted on it, the current zoning does not allow for greater density for buildings along Atlantic and Jamaica avenues.

Carina Nieves, who lives in Richmond Hill, said that while she thinks the plan would benefit Woodhaven, she doesn’t feel the same for her neighborhood. She said that she doesn’t want to see her area look like Jackson Heights or Corona with taller buildings. She added that residents need better access to businesses in the neighborhood, if they want to promote economic development.

Wendell voiced his support for the rezoning plan, saying that it would prevent overcrowding and parking problems and keep the area to family homes.

After the issues were all voted on, the board dedicated some time towards the end of the meeting to vote on officers for this year.

In a vote that was a nail biter, Joan Decamp was elected as new chairperson of CB 9, defeating Andrea Crawford, who held that position previously.

Decamp, who has been a CB 9 member for over 20 years, said that she was delighted to be elected chairperson and that she wants to make changes within the office and make the board look more professional.

Joe Iaboni, who ran for 2nd Vice Chairperson at the meeting but lost to Ivan Mrakovcic, who retained his seat, was also elated with Decamp’s election as chairperson.

“Finally, we have a good chairperson that understands the members of the board,” Iaboni said. “I know she’s fair.”

The next CB 9 meeting will be on April 10th at Villa Russo in Richmond Hill.