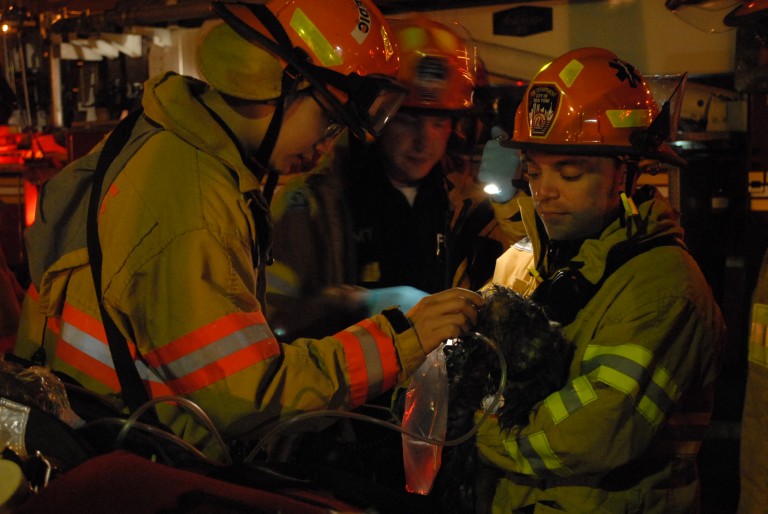 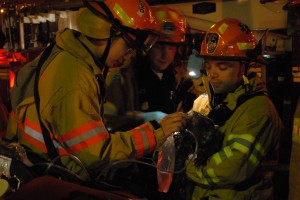 Firefighters pulled a woman and her dog from a burning apartment in the Big Six Towers in Woodside. They gave both of them oxygen outside after rescuing them.

Firefighters pulled a woman and her dog from the blazing living room of a fourth-floor apartment in Woodside on the night of Thursday, March 8.

Around 10 p.m., Hurija Muskic was in her third-floor apartment in the 46-10 61st Street wing of the Big Six Towers when she heard a scream.

She said it came from the apartment directly above her. Not knowing what was going on, she called 911.

The Rescue 4 fire company—stationed less than two blocks away on Queens Boulevard—quickly responded.

Lt. Dennis Gordon and a team from Rescue 4 climbed the stairs to the fourth floor apartment in the rear of the building and saw an open door.

Inside, they found high heat and smoke coming from a fire in the living room and began searching for the occupant.

They found an unconscious woman in her 40s. The team carried her downstairs by her limbs and began giving her oxygen on the sidewalk where she regained consciousness.

She was then transported by ambulance to Elmhurst Hospital where she was treated for skin and respiratory burns.

“If she was in there for just a few more minutes, I don’t know if she would have survived,” saidBattalion Chief Robert McBride from Battalion 46. “[The members] went in without hesitation and found her right away. Their actions definitely added to her chances of survival, no doubt.”

Firefighters also found a small dog in the apartment. They removed the pet and treated it outside as well, giving it oxygen and using gauze to clean soot off its face.

Muskic, like other residents, were told to stay in their apartments, but she and neighbors—clearly shaken—hurried outside after the fire was out.

She said the hallways had filled with thick black smoke from the open door.

The smoke was so thick inside that it filtered out of the front door on the ground level as firefighters began leaving the building.