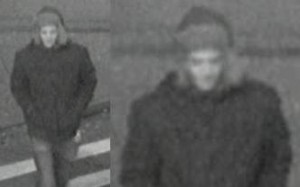 Police released this photo of the suspect. Photo courtesy of the NYPD.

Police are searching for a man who has robbed vendors at food carts from Ozone Park to Elmhurst between March 2 and March 10.

On three days in March, he went on sprees, robbing two, three and four people one after another. He struck in the early morning hours, according to police, and rotated back to previous crime scenes to make more robberies.

In eight incidents, police say, a white or Hispanic man in his early 20s approached a vendor and demanded money—threatening with a gun—before fleeing.

Police say he is around 160 pounds and between 5 feet 10 inches tall and 6 feet tall.
They also want him for the robbery of a livery cab driver where a man took cash in Elmhurst.

No injuries were reported in any of the cases.

The nine incidents include three on March 2, two on March 5 and four on March 10. They all occurred between midnight and 4 a.m. Three took place on Queens Boulevard, but they ranged south to Liberty Avenue.