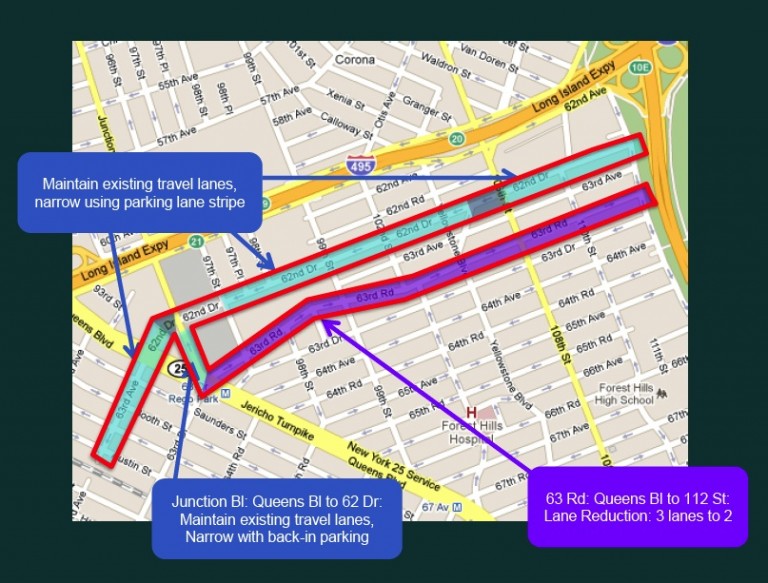 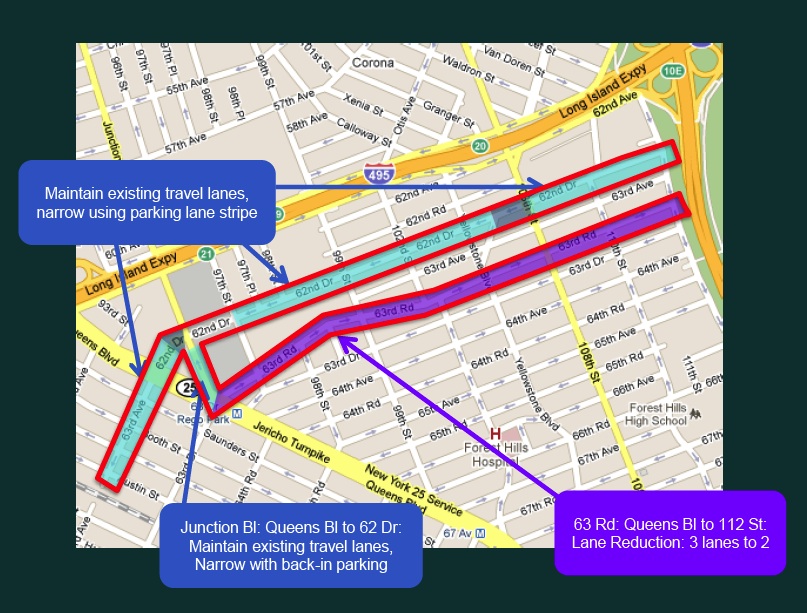 CB 6 approved a traffic calming plan on March 14 that will add parking lanes on 63rd Road and 62nd Drive in Rego Park and change 63rd Road from three lanes to two lanes. The plan aims to slow down drivers in two areas that has seen six pedestrian fatalities in the last 10 years. Photo courtesy of DOT.

After months of investigation and studies by the Department of Transportation (DOT), Community Board 6 voted overwhelmingly to approve a traffic calming plan that will bring changes to two major streets in Rego Park.

The approved plan, which was presented by DOT at CB 6’s latest meeting on March 14, will see 62nd Drive and 63rd Road undergo changes that will slow down traffic for drivers and make it safer for pedestrians walking on those two streets, which serve the Rego Center Mall.

62nd Drive will keep its two lane setup, but will have wide parking lanes installed on each side of the street. Also on that same street the approach to Queens Boulevard will be divided into three lanes, with a left turn, straight lane and right turn arrows painted for drivers.

As for 63rd Road, it will be changed from three lanes to two lanes, with a wide parking space occupying the space created by the lane reduction.

One other street change in the plan will see Junction Boulevard, which is also by the Rego Mall, get 10 back-in parking spaces to reduce speeding in that area as well.

According to Jesse Mintz-Roth, a DOT representative who presented the plan at the meeting, although the wide parking lanes make the roads smaller for motorists, they tend to decrease speeding.

During the presentation, Mintz-Roth said that the main reason for the changes is because both streets have been vulnerable to car and pedestrian accidents.

DOT Queens Borough Commissioner Maura McCarthy said they have found a lot of speeding in the area surrounding the mall – something they hope to cut down on to lower the number of accidents.

“We’re all drivers, we’re all in a hurry, the speed limit in New York is 30, I can’t stress that enough,” McCarthy said.

John Dereszewski, CB 6 member and chairman of the board’s transportation committee, said that besides making it safer for drivers and pedestrians, he likes the plan because it makes the streets it addresses more uniform.

Despite the board’s approval of the plan, some residents were unhappy that the traffic on 97th Street, which is near Junction and Queens boulevards, wasn’t addressed in the plan.

Doreen Lynn Saunders, a Rego Park resident who attended the meeting, said she was unhappy that CB 6 voted to approve the plan during that meeting, and that they should have held another meeting prior to the vote to find out what residents thought. She added that there is speeding on 97th Street and that it should have been included in that plan.

McCarthy said that traffic calming plan did not include 97th Street, but they can open another study on that street alone.

Speaking to The Forum after the meeting, CB 6 District Manager Frank Gulluscio said that the problem with that area seems to be a traffic enforcement issue, but that they would be working with the DOT and the 112th Precinct to address residents’ concerns.

According to a DOT spokesperson, work on the street changes will begin in June and it is expected to finish in July.