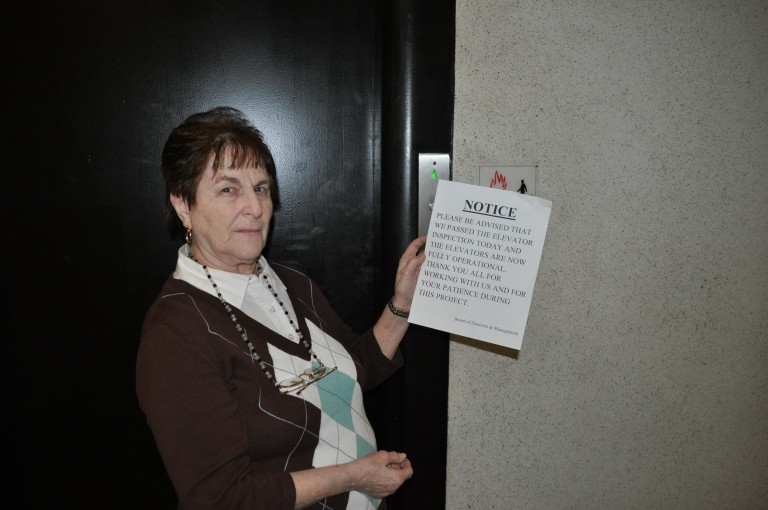 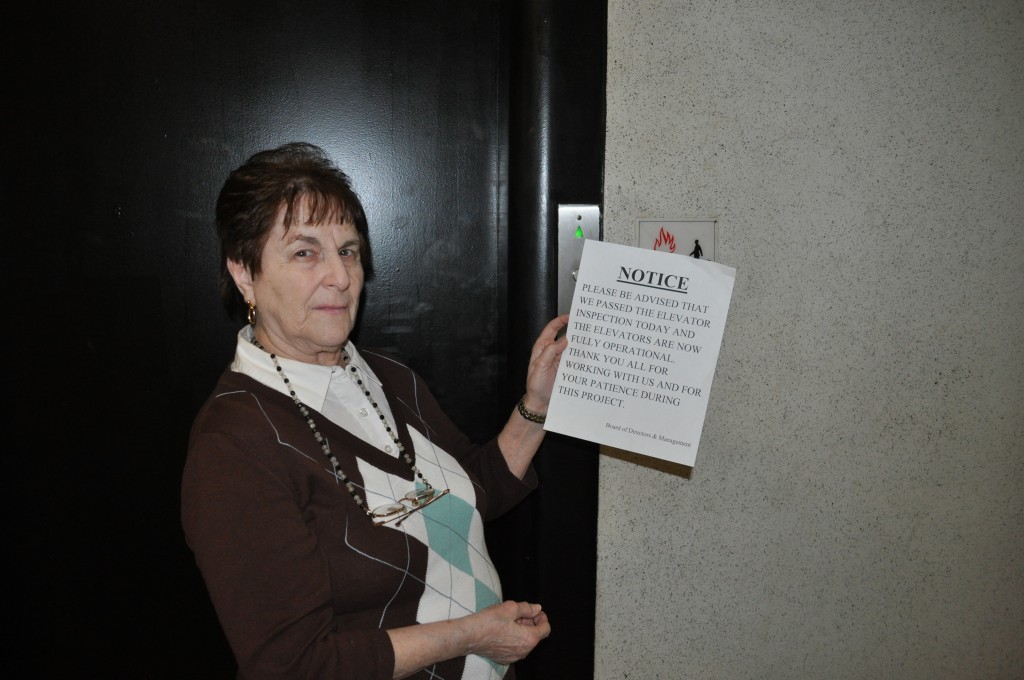 After her husband had to be carried downstairs for a doctor’s appointment, Adele Tenenbaum returned to her building Monday to find the elevator was working after two weeks without service. Forum Newsgroup photo by Luis Gronda.

Some seniors at the Fairfield Arms Co-op went 14 days without leaving their floor when a routine repair to their elevator left them trapped without service.

The motor improvements were supposed to take four days, but stretched to an unforeseen two weeks, a spokesman for the building’s management said.

For some residents at the six-story Lindenwood building, that was a harrowing amount of time.

“Now it’s to the point that they’re starting to feel like prisoners,” said Francis Grochiulski who lives on the fourth floor with some neighbors in their 80s.

Her next-door neighbors Adele and Sol Tenenbaum, both in their 80s, had not left their floor for the entire time.

Sol had to be carried down the four flights of stairs to get to a doctors appointment he had already put off for more than a week.

He has prostate cancer and is scheduled for weekly and monthly treatments.

“It’s not something the doctor can come here to the house to do,” Adele explained, and added “[Sol] feels very weak.”

On Monday, they made it down the stairs to the doctor. Adele had arranged for the superintendent and maintenance personnel to carry Sol.

When they returned for the trip back up though, they were met with joyous news—the elevator had passed inspection.

The problem, according to the building’s management, had been a technical one—not a dangerous one—all along.

He explained that the repair company they hired installed a break monitor switch on the motor.

That switch acts as a warning system and black box device that monitors the elevator and reports if there is a problem.

Radoncic said it was malfunctioning—reporting errors that caused the elevator to fail repeated inspection by the Department of Buildings (DOB).

The DOB did not return repeated requests asking for specifics on how many inspections there were and details on why the elevator failed them.

“It was just a fusion of new technology and old technology,” Radoncic said, causing a planned four-day repair to stretch to 14. “Unfortunately this was unforeseen.”

Radoncic said the company had a 45-day legal window to repair the elevator but it was unfortunate it took as long as it did.

During those two weeks, resident’s cabin fever was getting palpable.

Grochiulski said management was extremely accommodating—even posting a doorman to collect packages in the lobby and ferry laundry up and down the stairs.

“It’s getting a little scary,” she said on Monday, hours before the elevator came back online. She said some residents had completely relocated from the building on 88th Street to avoid the problem.

Now that the issue is fixed, Grochiulski said she’s relieved but a little worried. The Fairfield co-op covers two buildings and the next one is waiting for the same elevator repair.

“I’m just thinking about the future,” she said.