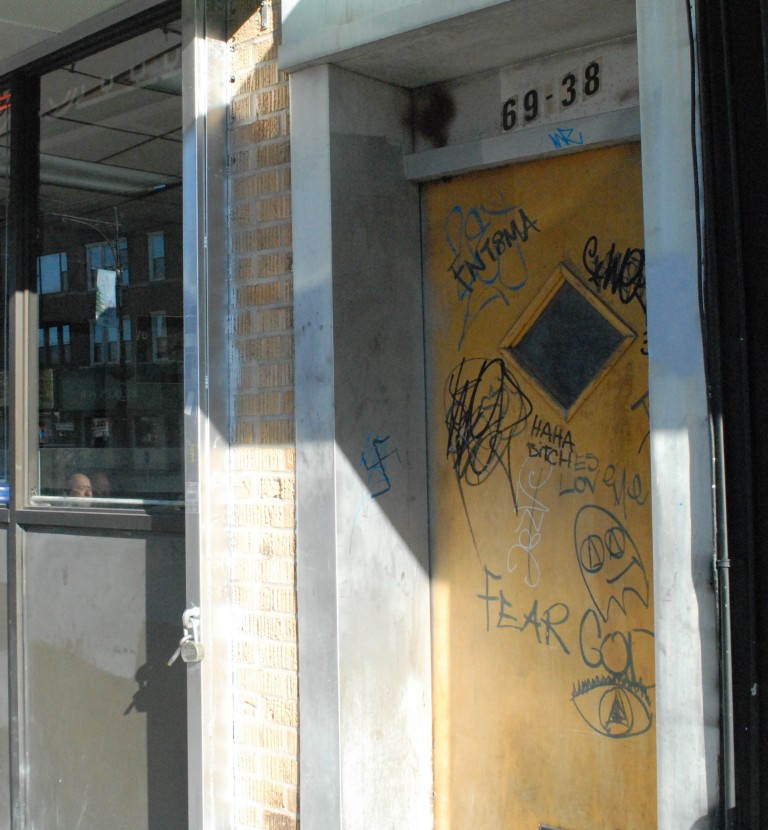 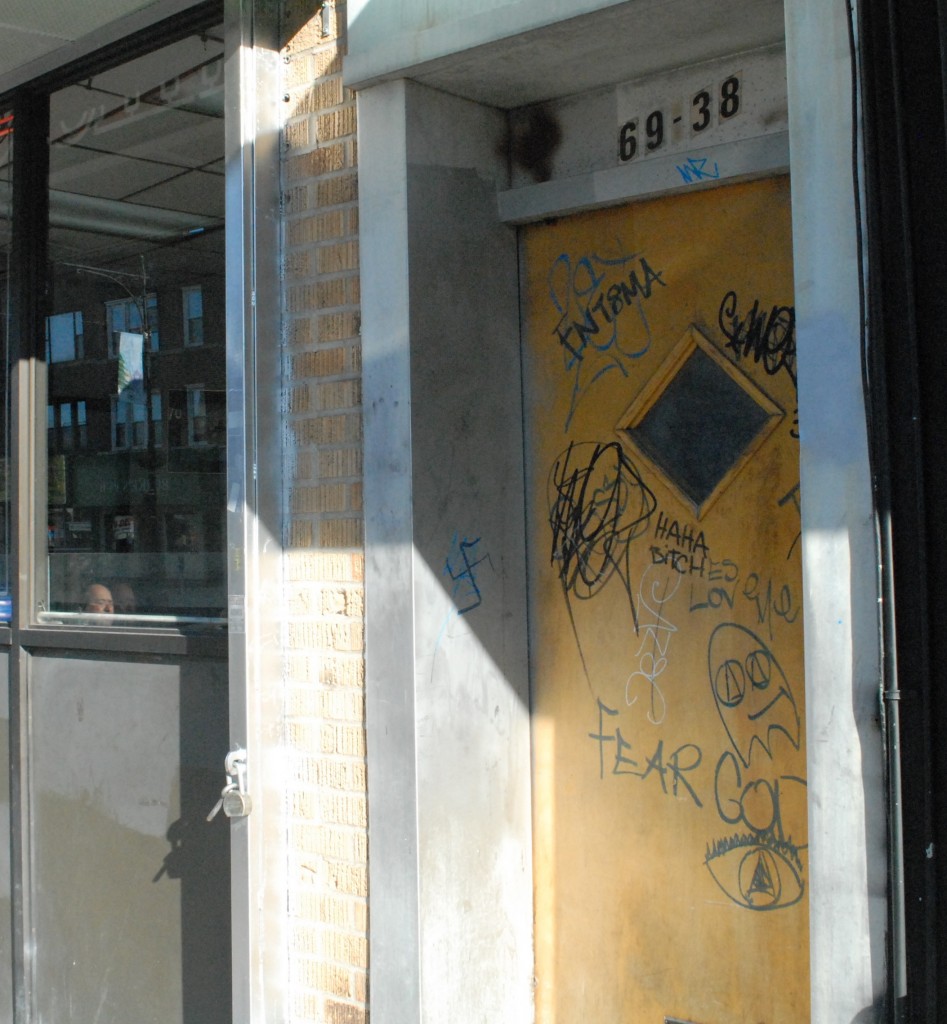 Police investigated a swastika painted on the doorframe at 69-38 Grand Avenue. It’s the second instance of racially charged graffiti found in about a month in Maspeth. Forum Newsgroup Photo by Jeremiah Dobruck.

Another swastika in Maspeth was uncovered last week on the door of a business on Grand Avenue in Maspeth—almost a month to the day since police investigated racist graffiti scrawled across a church in the same neighborhood.

Police responded on Wednesday, March 28 to a call about 69-38 Grand Avenue where neighbors found the racist symbol in blue spray paint.

Capt. Michael Cody, commanding officer of the 104th Precinct, said his officers don’t believe it’s connected to the last incident, and the timing may just be a coincidence of when it was found.

Unlike the graffiti found a mile away on Trinity-St. Andrews Lutheran Church near 60th Street and 60th Avenue, this swastika, he said, had been there a while.
The placement, he also said, was most likely not targeted at anyone nearby.

“There’s no houses of worship over there. There’s nothing that’s religious or sensitive near the location, and our investigation preliminary is that the graffiti was old,” Cody said. “There was other graffiti over there also, lots of other stuff scrawled on the wall—nothing to the level of the swastika.”

The detective squad did a preliminary investigation and ruled out any likely connection to Trinity-St. Andrews, which had multiple Stars of David and Swastikas drawn on doors and windows with a silver marker on Feb. 29.

“At this point in time it doesn’t look like it was related to the church,” Cody said.

After the high-profile Trinity-St. Andrews vandalism, the four congressional candidates running for the 6th District—which covers the area—jumped to speak against this new graffiti.

“We stand together to condemn this thoughtless act of hateful expression, and to declare that it has no place in our community, in our borough or in our city,” said a joint statement from Councilmembers Elizabeth Crowley (D-Queens) and Dan Halloran (R-Queens) and Assemblymembers Grace Meng (D-Queens) and Rory Lancman (D-Queens).

“An attack on one faith, one race, one ethnicity, one gender or one sexual orientation is an attack on all of us, and it should be treated as such,” the email continued. “Despite this awful display, we can take comfort in the fact that the efforts of small-minded bigots to intimidate and divide us are no match for the virtues of tolerance and unity that define our great city and the people who live in it.”

In a search for leads, police combed through recent 911 calls and talked to neighbors on Grand Avenue to see if there had been any complaints or reports of other hate crimes in nearby the area.

There were none, and police say the incident seems isolated.

“It looks like it was just random dummies, to tell you the truth,” Cody said.
The case has been referred to NYPD’s hate crimes unit.