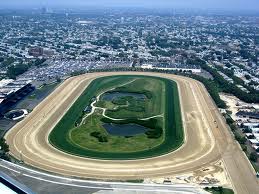 Aqueduct Racetrack in Ozone Park opened in 1894. It is currently the subject of an investigation to determine the cause of unusually high equine fatalities during the winter season.

After 21 horses died within four months as a result of racing at Aqueduct Racetrack, an emergency rule was passed to make their deaths less profitable. Now the sale of any horse that dies during or immediately after a claiming race in New York state will be void.

The rule, which was passed by the New York State Racing and Wagering Board on Monday, goes into effect immediately.

Of the 21 horses that died during the winter meet on Aqueduct’s inner dirt track, 18 broke down and were euthanized on the track, one had a cardiac arrest on the track, and two died several days after their races. Of the 18 horses that broke down, 15 were running in claiming races.

In a claiming race, all of the horses are for sale, for about the same price. Before the race, people can make “claims” with the track office. When the race is complete, any horse that has been claimed goes to its new owner – though the old owner gets to keep any purse money it wins. The claim amount varies – the idea behind this is to keep things even – you wouldn’t enter a good horse in a race if you thought you might lose him for less than he’s worth, even if he would win easily.

Under the old rules, owners could claim ownership of horses, even if they dropped dead during the race. This means they could potentially profit from the corpse, even if the animal they bought never moves a muscle after it leaves the starting gate.

Now, thanks to the new rule, it will be much harder to gain from racing horses that are not fit enough.

The fatalities were brought into the media spotlight when Governor Andrew Cuomo wrote a letter to the New York Racing Association (NYRA), the organization that runs the state’s racetracks, demanding an inquiry into the “extremely disturbing” number of breakdowns at the track.

In response to the governor’s letter, the NYS Racing and Wagering Board selected a task force of national experts to investigate the fatalities. The task force will look into and revise the policies regarding track conditions, pre-race examinations of horses, necropsies, equine drug use and claiming procedures, among other things.

The task force consists of Jerry Bailey, retired Hall of Fame jockey who’s been in more than 30,000 races and has won the Kentucky Derby, Preakness, and Belmont Stakes twice each; Alan Foreman, chairman and CEO of the Thoroughbred Horsemen’s Associations, Inc.; Dr. Scott E. Palmer, the hospital director and staff surgeon at the New Jersey Equine Clinic, and chairman of the Association of Equine Practitioners Racing Committee; and Dr. Mary Scollay, the equine medical director of the Kentucky Horse Racing Commission.

In addition to enacting the task force, the NYS Racing and Wagering Board enacted a public, online database detailing horses that have broken down, died, or sustained a serious injury at any track in New York.

“The public has every right to know exactly what is happening at race tracks in New York State,” said NYS Racing and Wagering Board Chairman John D. Sabini in a press release. “As the adage says, sunlight is the best disinfectant, especially for the state’s horseracing industry.”

The NYRA would not speculate as to the reason for the unusually high number of breakdowns this year, but spokesperson Dan Silver did say, “Providing a safe environment to conduct racing is NYRA’s highest priority, and this panel of industry experts will ensure that the proper procedures and best practices are in place to reduce the inherent risks involved in horse racing. This skilled group of racing professionals possess the knowledge and expertise needed to perform a comprehensive review of NYRA’s procedures and recommend changes to improve safety at all our racetracks.” Silver continued to explain that the NYRA doesn’t want to influence the task force accidentally, through speculative theories.
While the NYRA would not speculate, others have.

About a third of races run at Aqueduct are claiming races, followed closely by maiden races, which make up another third.

According to that same analysis by the Times, five out of the six tracks with the highest injury rates were racinos – racetracks that also have a casino somewhere on the grounds.

Aqueduct just became a racino last year, when Resorts World opened at the end of October – the same year the increased fatalities happen to have occurred. In fact, the NYRA announced this winter that purses would be 44 percent higher this year, thanks in part to the money flowing in from the casino.

Resorts World denies all responsibility regarding how the money it must give the NYRA is used.

Representative Stefan Friedman said the casino is required to give a certain percentage of the money it makes on gambling to the state, but that everything down to the amount is regulated by the state.

In addition to the required funding, Resorts World will be sponsoring the Wood Memorial this year, which is a $1 million graded stakes race and one of the final prep races for the Kentucky Derby.

In light of the increased fatalities, the NYRA announced that it will be raising the basement price to claim a horse in claiming races, from $7,500 to $10,000 at Aqueduct. No statement has been made regarding the actual purses of the races, however.

The Wood Memorial is scheduled to be run this Saturday, and features a showdown between two major Kentucky Derby contenders – Alpha, trained by Kiaran McLaughlin, and Gemologist, trained by Todd Pletcher.