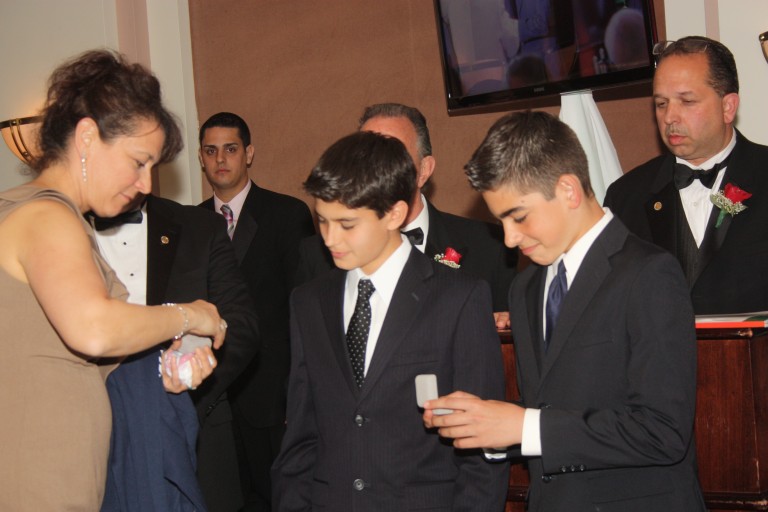 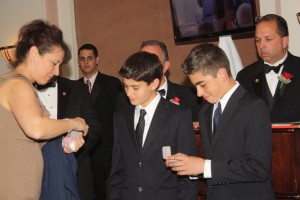 Jeanne Antonino presents soccer stars Joey and Gianfranco with medals of SS. Cosma and Damiano blessed for them.

Directors of the Our Lady of Grace Soccer Program offered a very special thanks to the International Society of SS. Cosma and Damiano for their generous and continued support at the society’s 20 Annual Dinner.

Dr. Jerry Antonino, Athletic Director of the program, praised the charity before a packed house at Roma View Catering last Saturday night. “Your continued support over the years has allowed our program to flourish and grow,” Antonino said, “and has provided or dedicated staff of volunteers the necessary tools to provide excellent training for our children.”

The results from the financial support of the society he described as “overwhelmingly positive.” The program has seen players graduate and continue on to high school soccer; year after year they continue to get calls from high schools interested in a “new crop” of talented players.

The soccer program has seen players receive scholarships to college where they played Divisions I, II and III NCAA Soccer. Other players from the program have gone so far as to be nationally ranked in the top 5 in the nation by the NCAA.

Beyond detailing the past success of the program, Antonino led into a very special announcement—both for the society and for the soccer program. “Tonight,” he began, “ we have the distinct honor of recognizing two of our players for their achievements in soccer.” Both players got their start in soccer at the OLG Instructional Program and have continued on representing the team through the years.

In recognition of the talents of both boys, the United States Soccer Federation has invited them to participate in the ID’2 Program which is designed to identify up and coming soccer talent, all while providing the opportunity to prepare for play on a national and international level. For a small, local parish program to gain such recognition, Antonino explained, was a huge achievement. “It is a tremendous accomplishment to be recognized by the U.S. National Team coaches for consideration to represent the United States in International Soccer competition,” he said. “Without your support this would not, and could not, have been possible.”

But the thanks and praise lauded on the Society did not end with words. In addition, the OLG Soccer Program has developed the Joseph DeCandia Sr. Memorial Achievement Award, for outstanding achievements in soccer.

The award was intended not only to honor the two young players for their hard work and dedication, but was also meant to recognize and memorialize the great achievements and unending service and dedication of Joseph DeCandia Sr. to the OLG Community.

“The Society, this night,” said Antonino, “exemplifies Joe Sr.’s undying servant’s heart. This award will now memorialize that heart for us all.”

President of the Society Joseph DeCandia Jr., shared his thought on the award intended to memorialize his father. “This is a night set aside every year for us to present awards,” he said, “but to have this award established in my father’s memory on such an occasion is beyond words. My father had tremendous commit- ment to our community and this is an unbelievable was to say thank you for his work in the community— work that this Society will make sure never ends.”