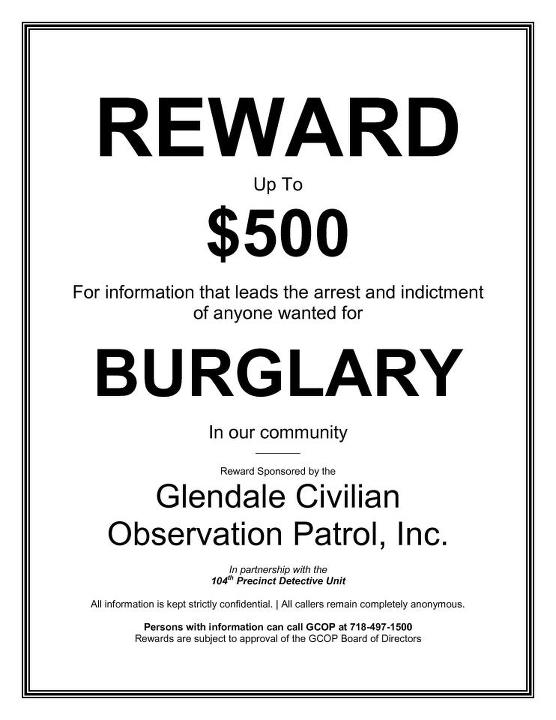 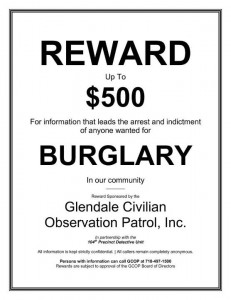 After a spate of burglaries in the 104th Precinct, the Glendale Civilian Observation Patrol (G-COP) has resurrected a $500 reward for information leading to burglary arrests.

The 104th Precinct’s executive officer recently announced that there were six burglaries last month in the precinct that covers Glendale, Ridgewood, Maspeth and Middle Village.

This month, the G-COP decided it was the perfect time to bring back the reward program.

The organization, which partners with the 104th, has set up an anonymous tip line that will hand out the $500 for any tips that lead to the arrest and indictment of anyone wanted for burglary in the community.

“There have been some [burglaries] in the area, but we’re just trying to assist the NYPD by offering this reward. In the past it was fruitful,” Frank Kotnik, a G-COP member said. “This is like a preventative measure in some parts of the community.”

The G-COP used the same program some years ago, Kotnik said. He couldn’t give specifics on how successful it was then because it’s strictly confidential.

“I’ll just say that it was successful,” Kotnik said. “We felt that the time was right to do it again just to tidy up things.”

Assemblyman Michael Miller has joined the G-COP in publicizing the reward, passing it around on his Facebook last week.

A spokesman for the assemblyman, Alexander Marion, said Miller has been a longtime member and supporter of the G-COP.

“He believes through working together, citizens can make their community a safer place. Through offering this reward, G-COP is working hard to ensure people responsible for crimes are caught and punished,” the spokesman said. “Assemblyman Miller has helped publicize the organization and their efforts to encourage everyone in Glendale to become active, involved, and aware.”

The patrol is having a general membership meeting Thursday, April 19 at 8 p.m. at 68-20 Myrtle Avenue in Glendale.

Kotnik said the organization is always glad to welcome newcomers. “We’d always like to have more volunteers join our organization because the people who join our organization don’t complain about crime, they do things about it,” Kotnik said. “It’s a great deal of satisfaction when you know that you’re doing something to make your community safer. Complaining about it is just not going to cut the cake.”