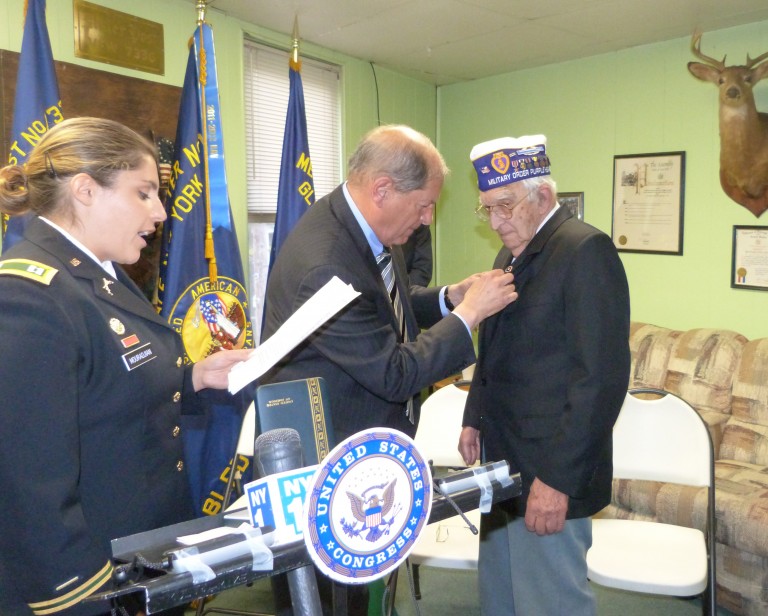 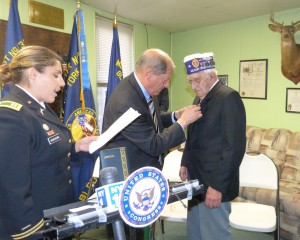 Congressman Bob Turner pins the Purple Heart on Richmond Hill native Anton Dietrich Jr. at a ceremony at the Sgt. Edwards R. Miller VFW Post 7336 in Glendale as Captain Chris- tina Mouradjian reads the history of the Purple Heart. The Congressman’s office helped the 93-year-old World War II veteran prove his entitlement to the medal 69 years after the actions that earned him the award.

Almost 70 years passed between the time Anton Dietrich Jr. was wounded during a battle in North Africa and when he received a Purple Heart for his bravery just last week.

Dietrich is a 93-year-old WWII Army veteran who lives in Richmond Hill. He fought in Tunisia, landed in Sicily as well as Normandy, and spent 32 months at Walter Reed Medical Center when a mortar shell tore into his legs, arm and back.

Dietrich was awarded a host of medals for his bravery, including the Bronze Star and Purple Heart for his injury, but on April 11, he was awarded a final medal.

Dietrich had been trying for years to prove he had earned a Purple Heart with oak leaf cluster when he took shrapnel to the leg during the April 28, 1943, invasion of North Africa. The clusters are included on a Purple Heart when it is not the recipient’s first.

He never could, but that’s when he turned to someone in Queens who is becoming well known for procuring medals.

Counting Dietrich, Congressman Bob Turner and his staff have hunted down and awarded a dozen WWII medals to two veterans and the family of a veteran.

Word began spreading after Turner
was able to prove that Arno Heller, a 91-year-old veteran in Rego Park had earned a Bronze Star he never received.
“Thank you Congressman Turner for the work that you’ve done,” said Dietrich at the ceremony. “You’ve accomplished something that I could not do. Even with all the evidence I submitted, telegrams, newspaper articles, and other documents, I could not accomplish this on my own. After Arno Heller’s ceremony I decided to give it one more shot—if anyone can do it, it must be a Congressman. Sure enough, Congressman Turner delivered.”

During the ceremony at Sgt. Edward R. Miller VFW Post 7336 in Richmond Hill, Turner read a list of Dietrich’s service.

He was drafted into the army in 1941 and assigned to the 39th Regiment, 9th Infantry Division.

Dietrich was taking part in the invasion of North Africa when a German airplane torpedoed his ship. He spent 16 hours stranded before a British boat picked him up.

From there, he fought against the Germans at El Guetta and Sedjenane in Tunisia and helped capture cities and take prisoners through Sicily and Norway.

He was finally seriously wounded by the mortar shell on July 12, 1944 and taken out of commission.

After all this, Dietrich married his wife Charlotte on June 3, 1945 while he was still in a body cast recovering at Walter Reed.

He finally left the Army on April 28, 1947 as a Corporal and moved to the same block of 89th Avenue in Richmond Hill where he grew up.

“Anton Dietrich has shown the type of bravery and resilience that every American should aspire to,” said Turner. “His actions in battle are a testament to why he and all of the other heroes that fought during World War II are truly part of the Greatest Generation.”

After Captain Christina Mouradjian, of the Fort Hamilton Army Garrison in Brooklyn, read the history of the Purple Heart, Congressman Turner pinned the medal onto Dietrich.

When asked about what the Purple Heart meant to him Dietrich said, “It is an award that no one seeks, but an award I am proud to wear.”