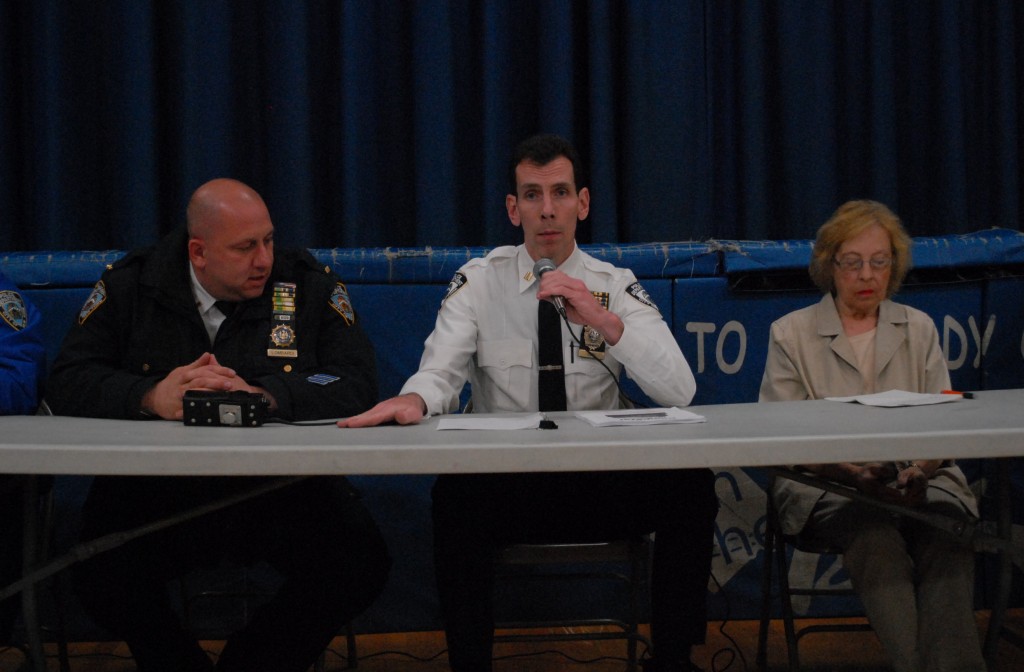 Police in the 104th Precinct are warning residents about a robbery pattern near the boarder of Middle Village and Rego Park.

Captain Michael Cody, commanding officer of the 104th, said that this month near 80th Street and 60th Road in Middle Village, two robberies took place at around 5:30 p.m. The first was on April 5 and the second was just a week later.

Speaking at the COP 104 meeting on Thursday, April 19, Cody said police believe a group is following people under an Long Island Expressway overpass nearby and striking when the opportunity arises.

“We’ve developed a response plan with the detective squad,” Cody said. “Lt. Lombardi of the anti-crime team will be conducting surveillance over there, and I’ve just been out there myself.”

Additionally, community affairs officers will do some outreach in the area warning would-be victims.

“It’s a very well-traveled area over there. It’s a lot of foot traffic, so we’re going to try to do some education over there,” Cody said.

Those two robberies are contributing to an uptick of four robberies over the last month compared to the previous month.

It follows a trend citywide, Cody said, of robbers targeting expensive handheld electronic devices like iPads and iPhones—driving robberies up.

The 104th Precinct has also had three more burglaries this year compared to last year—91 to 88.

“The commonality is—again I don’t want to blame the weather—but we did have this trend of warmer weather, and a lot of the times the entry point is the window,” Cody said.

The captain has also created a burglary response team to take on calls for any suspicious activity residents see on their lawns or in their driveways.

Cody asked residents at the COP 104 meeting to get a description and call 911 if they see suspicious activity.

The precinct has also made two notable burglary arrests recently, the captain said.

On Monday morning, they took in a suspect on Myrtle Avenue who wasn’t from the area but had an extensive history, and that adds to a burglary arrest made in mid February on Flushing Avenue, Cody said.

“We’re hoping that with a lot of these arrests word gets back and we can make some inroads,” he added.

Crime overall is down in the 104th, Cody reported, saying the major drop is in grand larcenies and auto thefts.

The area is down 10 grand larcenies compared to this time last year, and thefts of autos is down 39 percent with 32 less stolen this year compared to last year, Cody said.

After Cody fielded questions mostly regarding quality of life at the most recent meeting, Nisenson took a minute to point out what an improvement that was.

“When we first started, these meetings were so raucous you wouldn’t believe it,” he said.

Nisenson said that 20 years ago, concerns had more to do with 3,000 cars a year being stolen than with graffiti and traffic complaints.

They pushed for those issues to be taken seriously though, even when precinct commanders sometimes resented being told what to do.

“We had arguments with our captains in the beginning that were unbelievable,” Nisenson said. “Slowly but surely they came around.”

Now, the 104th Precinct is helmed by Cody, who COP 104 members repeatedly laud for his community involvement and responsive communication.

That change, along with a drop in crime and luxury to focus on quality of life issues makes Nisenson very happy, he said.