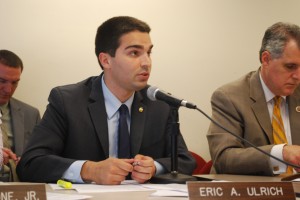 In a shocking announcement at 10 this morning, Republican City Councilman Eric Ulrich posted a video saying he will challenge Democrat Joe Addabbo for his New York State Senate seat.

Just this week, City and State reported that Ulrich, a second-term councilman, was unlikely to run for senate.

He is, however, a top choice of Queens GOP officials. The 27-year-old is viewed as a rising star on the Republican horizon.

Addabbo and Ulrich will battle for the 15th District, which stretches from the Rockaways through Howard Beach and Ozone Park, up to Maspeth and Forest Hills.

Check out a map of the recently redistricted Senate District here.