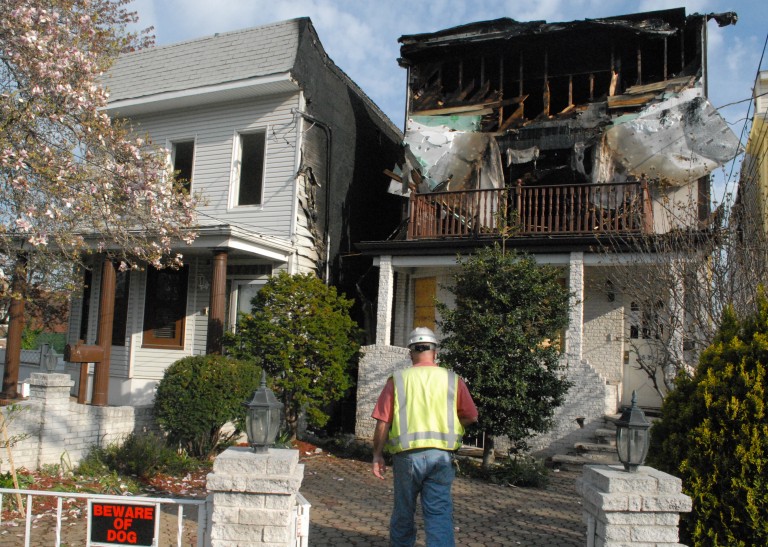 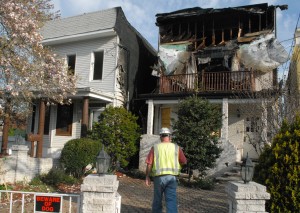 On March 27, Sparky the dog earned a new name and found a new life.

The 8-pound Yorkshire Terrier–Maltese mix is a survivor. He escaped a three-alarm fire in his house and is looking for a new home to match his new name—he used to be called Pee Wee.

In the meantime, he’s thanking the firefighters who saved him.

Firefighters were there within minutes, neighbors said, but the blaze was persistent.

By 8:10 p.m., the fire was upgraded to three alarms, and more than 100 firefighters were trying to douse flames.

“It was bad,” said Regina Massaro, who lives two blocks away.

She showed up that night to see some of occupants outside holding pets—a German Shepherd dog and a cat that was now soaking wet.

They had been out with the German Shepherd and managed to find the cat.

But Sparky was still missing.

His owners didn’t find him until after the fire was put out at about 11 p.m.

He was drenched and had a cut on his back leg. He somehow had made it out of the house and had been hiding in the backyard.

“We’re not really sure if he jumped or if he ran when the door was opened,” Massaro said. “He was saturated because they were putting the fire out.”

Regardless, he was alive, but his home was destroyed. Flames had gutted the two-story house, and the owner had nowhere to keep a dog, so Massaro stepped in.

She runs Maspeth’s Spay and Neuter Intervention Project (SNIP), an animal rescue and spay-and-neuter organization. Massaro patrols the streets in Queens and Brooklyn, taking in abandoned animals and confronting problem areas where feral populations have gotten out of control.

She doesn’t normally take rescues from the public—she finds them abandoned—but in this case, she made a temporary exception.

“Sparky stayed overnight because the owner had nowhere to put him,” Massaro said.

But that night turned into a few days. Those days turned into a week, and now, it’s been almost a month that Massaro has had the small dog.

The owner simply never took him back, she said.

Massaro tried to get the owner to retrieve the dog, or at least pay for vet expenses.

None of that happened. At this point, she said, the owner has signed the dog over to her, and she’s searching for a new home and new life, complete with a new name as a reminder of what he went through. Sparky.

He wasn’t in good shape to begin with. In addition to his injured leg, Massaro said he was terrified, timid and matted.

She took him to the vet, had his leg treated, neutered him and updated his shots.

That and a little tender loving care have completely turned around Sparky, who, according to Massaro, will now hop up on his hind legs and lick her to get attention.

Massaro has a relationship with local first responders. She often works with cops and firefighters who see animals on the street.

Sparky has taken to visiting firehouses with her.

She’s planning to donate a cadre of inherited WWII patches to local stations as a thank-you from herself and Sparky for what the firefighters did at that fire on March 27.

“They saved him,” Massaro said. “The truth of the matter is, they were the ones that saved him because they were there immediately.”

His new name, too, is a constant reminder of what Sparky managed to survive: It’s the perfect moniker for a dog whose life was turned around by a destructive fire and the heroism of first responders, Massaro said.

“To be perfectly honest, that fire destroyed that home and saved this dog,” she said.

Sparky still needs a permanent home. Anyone interested in adopting him or other animals from SNIP can contact the organization at 917-658- 4524 or SNIPNYC@aol.com