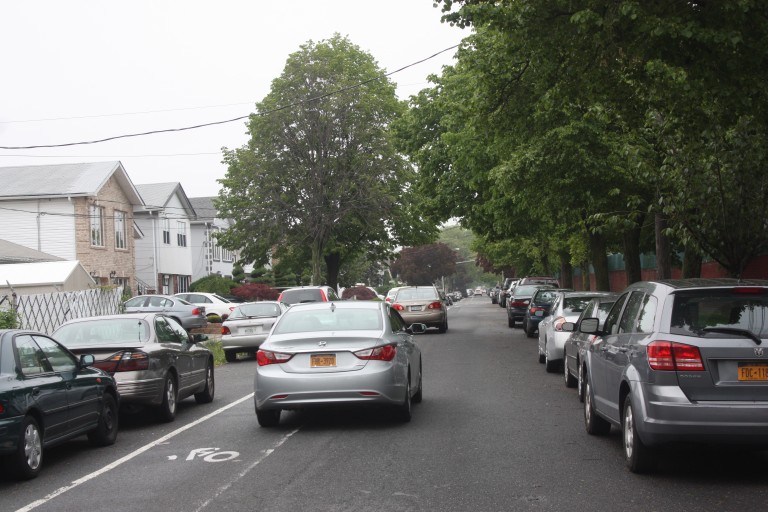 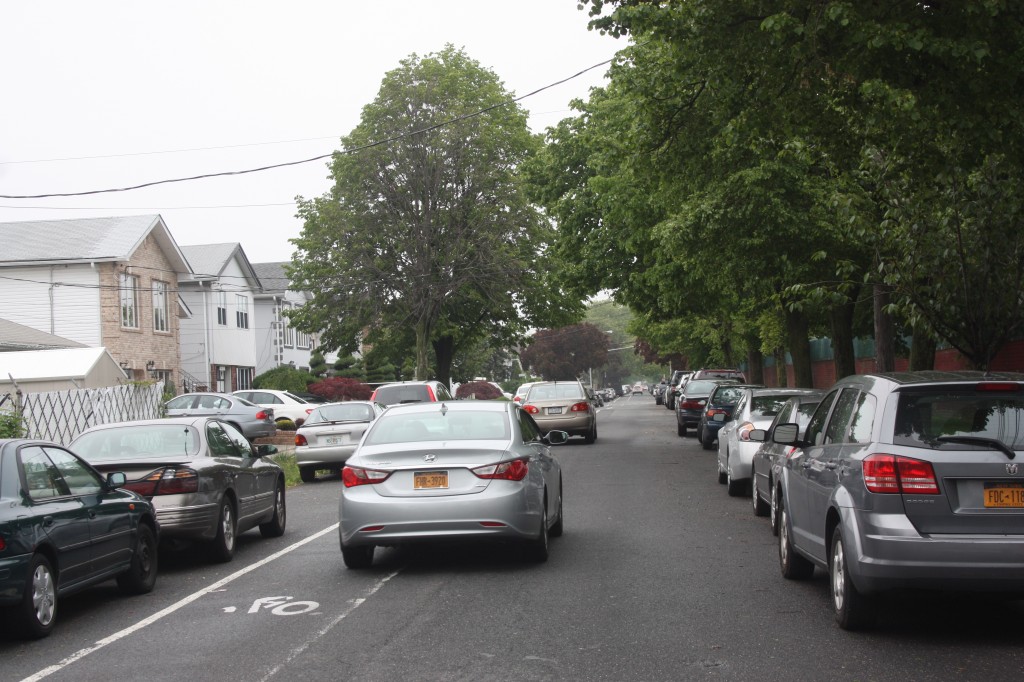 Cars traveling northbound on a crowded 92nd Street in Howard Beach have to deal with other vehicles legally parked on both sides of the street as well as a bike lane. Now the MTA is threatening to turn the narrow residential street into a bus route. The distance between parked cars on the street is approximately 12 feet wide and the average width of a city bus is nine feet, leaving roughly one and a half feet on each side of a bus traveling down 92nd Street. Forum Newsgroup photo by Patricia Adams.

Residents are up in arms about upcoming service changes proposed by the Metropolitan Transit Authority (MTA) for routes serving Howard Beach and Hamilton Beach. The agency says it is eyeing other changes as well.

MTA officials at the May meeting of Community Board 10 (CB 10) announced that starting on July 1, there will be modifications along the routes of the Q11, Q21 and Q41.

In the Lindenwood section, riders traveling to and from the south, namely Broad Channel and the Rockaway Peninsula, will now be required to transfer onto the new Q52 limited route. The new route will supplement the Q21 local and have two additional stops added, one at 163rd Avenue and Cross Bay Boulevard in Howard Beach and another at Fifth Road and Cross Bay Boulevard in Broad Channel.

Under this change and renaming of the current Q21 limited, bus service will only run between the Rockaway Peninsula, through Broad Channel and into the intersection where Cross Bay and Woodhaven boulevards meet.

With the changes, the Q21 local will now be shortened and made to go only as far south as 164th Avenue and 92nd Street in Howard Beach. Transfer to the Q52 will now provide transport to passengers on their way to Broad Channel and Rockaway. Northbound travel will still extend to the Queens Center Mall and it will retain current hours of service.

According to MTA representative Robert Lai, who made the presentation to the crowd, proposed changes to the Q21 service are to provide increased service in Arverne, a community that has recently seen a boom in population.

“We saw that opportunity to adjust the route that wasn’t carrying many people to the Rockaways to provide service to an area that didn’t have service,” Lai said. This change would not affect riders who travel in the northern part of Howard Beach before Lindenwood; only those traveling south would require transfers.

Among the most disgruntled of those present were possibly the residents in Hamilton Beach who were informed that the change to their part of the route would result in a total termination of service on the Q11 after 9 p.m., forcing them to use the pedestrian bridge at 163rd Avenue.

Pat McCabe, a representative from Sen. Joe Addabbo’s office, said the planned service stoppage would be prior to the nightly Queens Center Mall closing and that many people who work there must use that bus to get home.

Although the MTA said that this change would only affect Hamilton Beach residents slightly, CB 10 Chairwoman Betty Braton disagreed with that.

“The people in that community would not consider that a slight effect,” Braton said.

More sharp criticism came with the announcement that the MTA will seek to eliminate the bus loop on 84th Street in Howard Beach. Now they say, the buses will turn off Cross Bay Boulevard either at 161st Avenue or 164th Avenue and then make a second turn in the northbound direction onto 92nd Street.

That drew an immediate reaction from two outspoken members of the board, both life-long Howard Beach residents. The first to balk at the suggestion for either of the avenues to host the turn-off was Joann Ariola. She has lived on 164th Avenue for more than forty years and describes the prospect this way, “the only thing more ridiculous than putting the turn-off at 161st Avenue is moving the turnoff from 164th Avenue at 84th Street to 92nd Street.” The elimination of the 84th Street loop will also make it increasingly difficult for riders living below 84th Street who will now be forced to travel a minimum of 12 blocks down to 92nd Street.

Ariola detailed her concerns by saying that the one-way northbound residential street offers a very small corridor for the bus between parked cars on both sides. “And,” Ariola said, “Let’s not forget about the bike lane.” There also remains a question about having sufficient turning radius from either 161st or 164th avenue onto 92nd Street.

Fellow board member Nina DeBlasio shook her head vehemently in agreement and was quick to offer testimony about the turn on 161st Avenue. “Turning a bus off onto this [161st] avenue is absolutely ridiculous. You’ve got parking on both sides of the street and a crowded United States Post Office. On top of that you want to then turn it onto 92nd Street, a one-way street, with cars parked on both sides?” quipped DeBlaiso.

A few days after the meeting MTA spokesman Kevin Ortiz said that strenuous objection to nightly cessation of service on the Q11 in Hamilton Beach resulted in a modification that would push the shutdown time to 10 p.m.

A DOT spokesperson said that while they have not been contacted by MTA/NYCT regarding possible parking meter removal on 161 Avenue, their agencies would work together to coordinate any adjustments on that street should that need to occur.

Finally, there has been no decision on which of the turning options for Howard Beach the MTA will go with as of yet, with the agency claiming they’ll make no decision on that part of the route without community input.

Ortiz said implementation of one of the training turning options won’t happen before September 2012.

Patricia Adams contributed to this story.