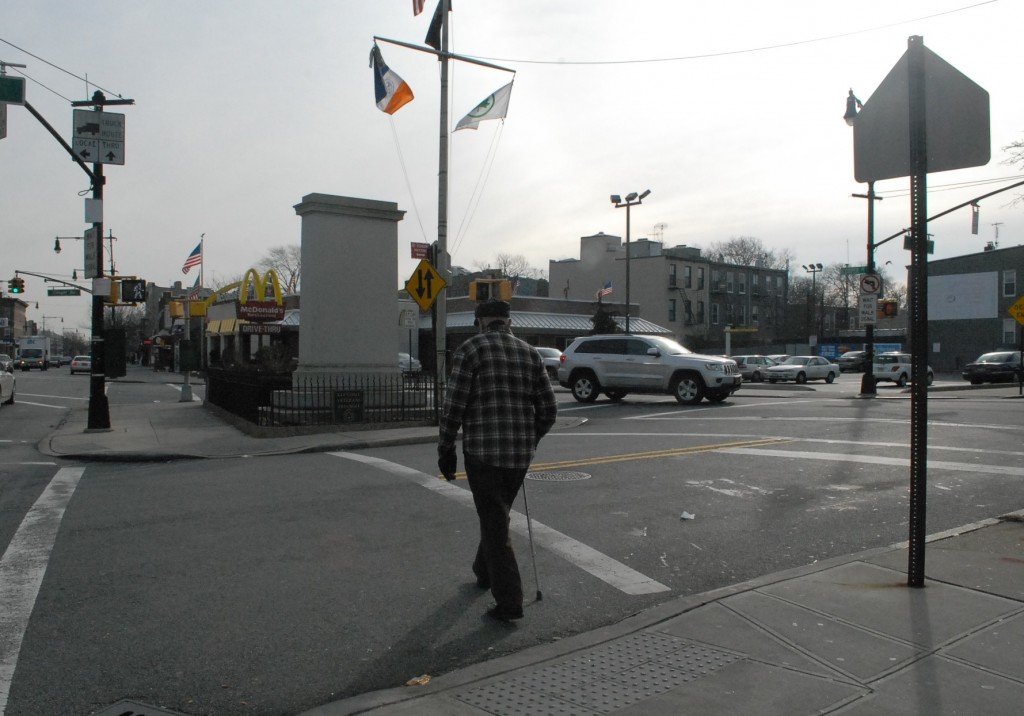 This small portion of 70th Street between Cooper and Myrtle avenues could be blocked off to traffic in order to create a pedestrian plaza. Forum Newsgroup Photo by Jeremiah Dobruck.

Glendale residents got their second look at a proposed pedestrian plaza, which would give the neighborhood a different look if it goes through.

The city Department of Transportation (DOT), the Department of Design and Construction (DDC) and the Ridgewood Local Development Corporation hosted a public hearing on Wednesday, May 2 at the Redeemer Lutheran School about the pedestrian plaza in Glendale, which would close off a small slice of 70th Street between Cooper and Myrtle avenues and turn it into a walking-only space.

The proposed open space is part of a DOT program called the Plaza Program, which partners the city agency with a local nonprofit to create public plazas like the one proposed for Glendale.

According to Alex Berryman, an architect from the RBA Group, the design of the plaza would center around the monument that is currently in place in the proposed plaza area. The proposal would see an oval planter built around the monument, as a way to give the plaza a base of which it can be built on. Berryman said that the Parks Department also requested that the planter be built so that it will create distance between people that would be at the plaza and the memorial itself.

An outdoor café space would be added to the right of the Zum Stammtisch, a popular German restaurant that is right next to the proposed plaza. According to Berryman, the space would have enough seating for 38 people. It was added to the plan after many residents requested it after the first public hearing in January.

Other aspects of the proposal include five, six-foot DOT benches, which would be spread throughout the plaza, a drinking fountain and a bicycle rack for commuters to place their bikes on.

Berryman said that they wanted to have some seating in the plaza in case people want to relax, but not too much, as they want to discourage skateboarders from skating along the edges of the benches.

Although the majority of the residents seemed to support the plaza proposal, they did raise some questions about the plan.

Linda Bohn, who lives on the dead-end portion of 70th Street, said that 68th Street is a dangerous street to make turns on. She was concerned about how she is going to get to her house on that block.

Gary Giordano, District Manager of Community Board 5 (CB5), said the concerns of those residents are valid. According to Giordano, there is a bend on the road just east of 68th Street and it’s difficult for people that are driving to see oncoming vehicles if they are making a turn. If the plan goes through, Giordano said that a lot more people would be using that street to get onto 70th Street.

“To make a left turn from southbound 68th Street to go east on Cooper is extremely dangerous,” Giordano said.

Giordano added that the board has twice been denied requests for a traffic light or an all-way stop sign on that street and that they will try again if the plaza proposal is approved.

As for what’s next for the plaza, the DOT will meet with CB 5’s transportation committee, tentatively scheduled for May 22, to discuss any further changes made to the proposal after last Wednesday’s public hearing. CB 5 could vote on the plaza plan in their June public meeting if DOT finalizes the plan by then.

Giordano said that they may move the committee meeting to a public space to accommodate community members who wish to attend.

According to Bharat Parekh, a DDC official who attended the Glendale public hearing, if it gets approved by the board, construction of the plaza is roughly estimated to take 10-12 months to build once it starts and would cost between $1.3 and $1.5 million. Parekh said they would have a more accurate estimate once the plans for the plaza are finalized.