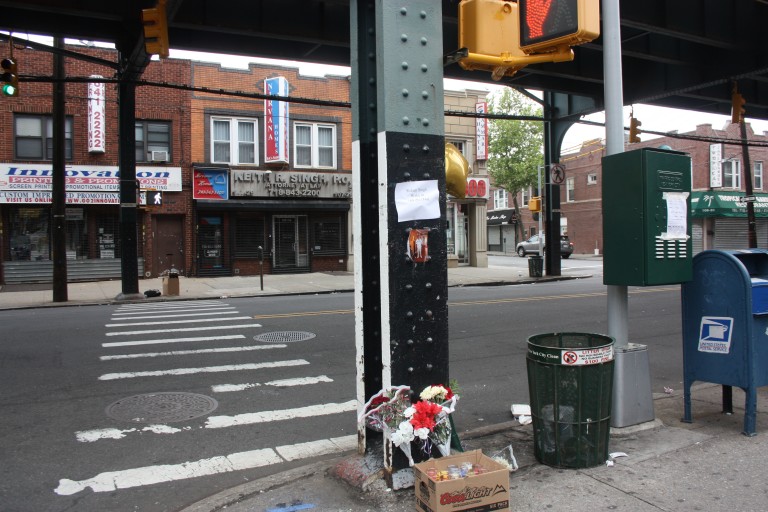 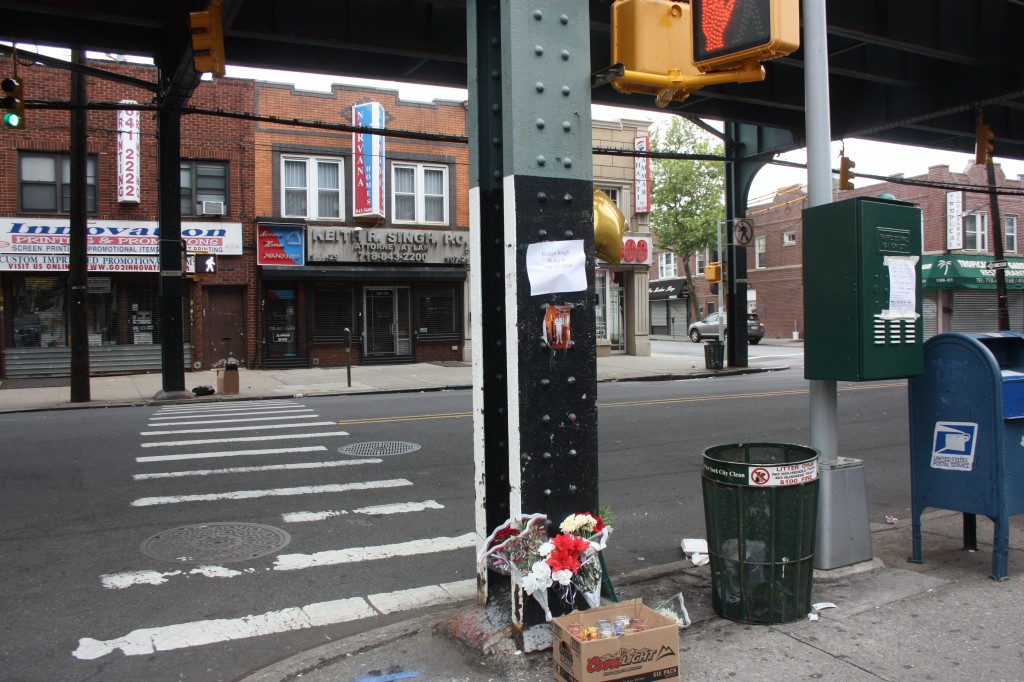 A flower memorial and wake announcement marks the Liberty Avenue corner where Rohan Singh was killed by a hit-and-run-driver on Sunday morning. Forum Newsgroup photo by Patricia Adams.

“I heard the speed coming from behind me.” That’s how eyewitness Adam Pedroza described the seconds before a 45-year-old woman was struck and killed as she stepped off the sidewalk on Thursday evening.

Estella Peralta had just stepped off the curb onto Rockaway Boulevard, according to Pedroza. “It was less than three seconds before she was up in the air,” he said.
The woman was about to cross Rockaway Boulevard from the corner of Nissan of Queens over to P.C. Richards when an unidentified female driving a Mini Cooper ran the red light and struck her, according to Pedroza and other witnesses at the scene.

“Never. I will never forget what happened in the next few seconds,” Pedroza said

“Not for my entire life.” The Howard Beach resident had been standing outside his car at Dunkin Donuts at the busy intersection of Rockaway and Woodhaven boulevards when he heard something from behind him. “I can’t really describe it better than to say I heard the speed of the car coming.” He turned his head and followed the car through the red light, turning his head to have the woman attempting to cross come into view. “I know it happened in what was like a split second but it seemed to go almost like slow motion.’”

At the time of impact, according to the witnesses, Peralta was thrown into the air. “She landed on the hood of the car and was sent flying down the street,” one man at the scene said. “She got hit twice.” The woman landed about 25 feet from the original impact, just in front of the car, which then came to a stop.

“I come here a few times a week with my wife and family, “ Pedroza said, “and I see people blowing this light all the time. It will happen again. I am not surprised that 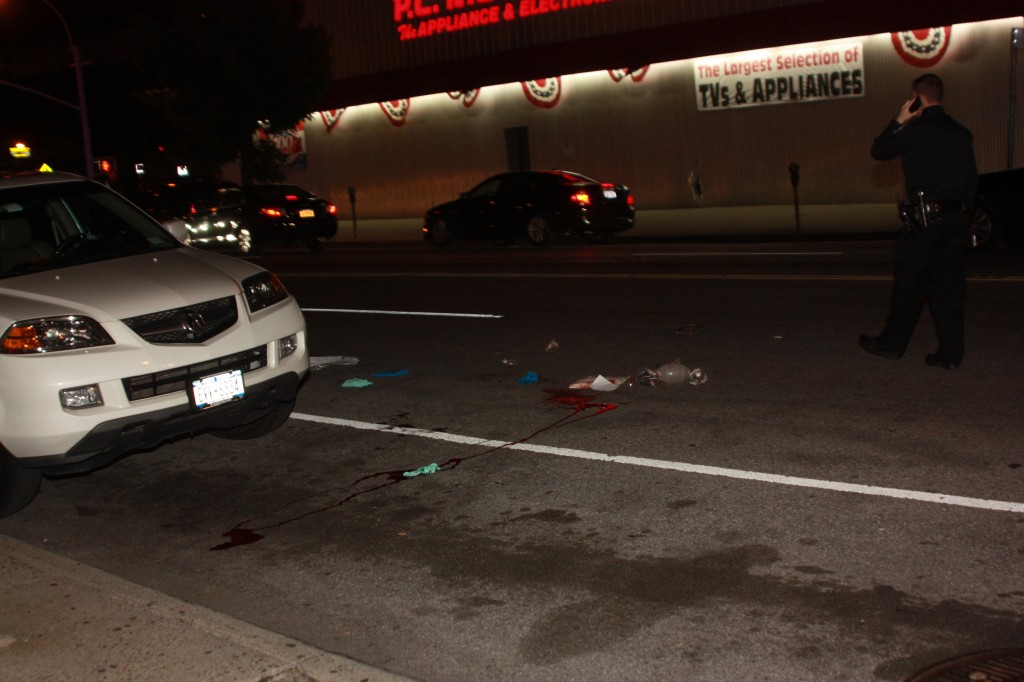 Blood runs in the street near discarded emergency equipment used by EMS, who desperately tried to treat Estella Peralta. The 45-year-old was pronounced dead at the scene. Forum Newsgroup photo by Patricia Adams

Standing in the street near where the Mini Cooper was parked, he went on to say how sad it was that someone’s life could be brought to an end because of another person’s rushing. “This poor lady never had a chance.”

The driver was not charged in the incident and police sources said that she had not been drinking.

Just a little more than 48 hours later, on nearby 108th Street and Liberty Avenue, a man in his 40’s was killed as he crossed Liberty Avenue on his way to a neighborhood grocery store. Rohan Singh, 47, had been having a few drinks in a neighborhood bar when he left to go across the street to the deli at about 3:30 a.m. on Sunday.

Witnesses say that Singh crossed against the light and met with a speeding driver who hit him and never stopped. Video footage from stores along the avenue were used as part of the investigation. It shows Singh as he crossed, and then the speeding car crashing into him and throwing him approximately 50 feet into a pole. He was dead at the scene.

A flower memorial was placed on the pole at the corner where the accident took place. “He was a nice guy,” said Narine, the owner of a Laundromat on the block where it happened. “I knew him for some years. Sometimes he would just bring me coffee—I didn’t even ask for it but he knew I opened early and he would just bring it for me.” 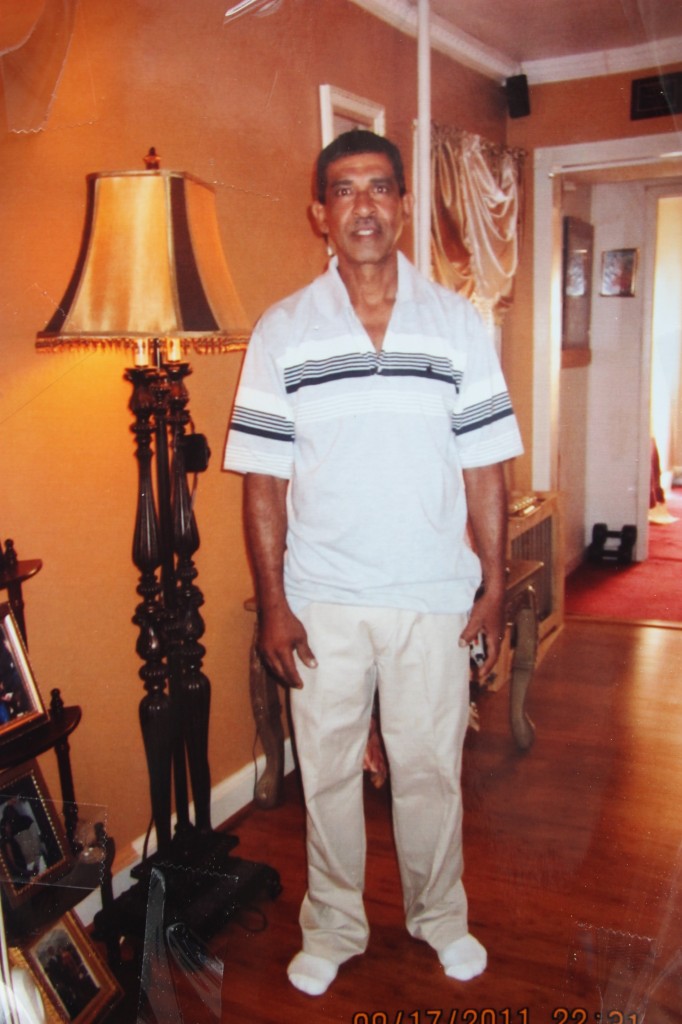 Rohan Singh—The 47-year-old construction worker was mowed down by a hit and run driver on his way to a grocery store early Sunday morning. Forum Newsgroup photo by Patricia Adams.

Family members say they want justice for Singh’s senseless death. The father of two came from Guyana and worked in construction to send money back home to his wife and kids.

According to police sources, the driver of a dark car, possibly a Nissan, is being sought in the fatal hit-and-run. Identification from the cameras has been somewhat impeded by the fact that there is distortion in the pictures when cars are traveling at high rates of speed. One source said the pictures usually are rendered unusable when speeds reach 70 miles per hour and up.

Police are asking anyone with information about the incident to call the 106th Precinct detectives at 718-845-2660.

Community Affairs Officer Kenny Zorn of the 106th Precinct says that the precinct has stepped up enforcement in all accident prone locations, trying to discourage speeding. “People may start getting upset when they get stopped in these high-risk zones, but we’re going to do everything we can to stop this driving behavior that is costing lives,” Zorn said. He went on to caution drivers operating without a license that they will undoubtedly be arrested on the spot if their license is not in order.

An additional pedestrian fatality occurred within 15 minutes of Singh being struck in Sunnyside where a 24-year-old man was killed by a drunken driver on the corner of Greenpoint Avenue and 46th Street. Witnesses said the man was trying to hail a cab when he was struck. The driver was arrested and charged with vehicular manslaughter, criminally negligent homicide, manslaughter and driving while under the influence.