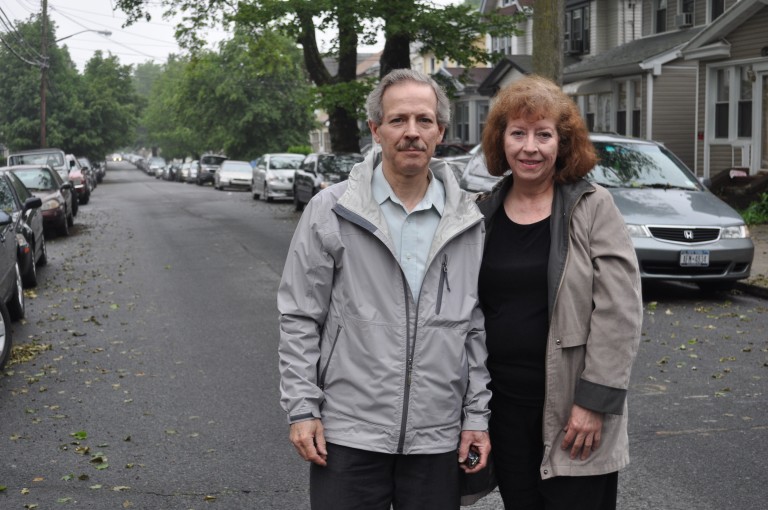 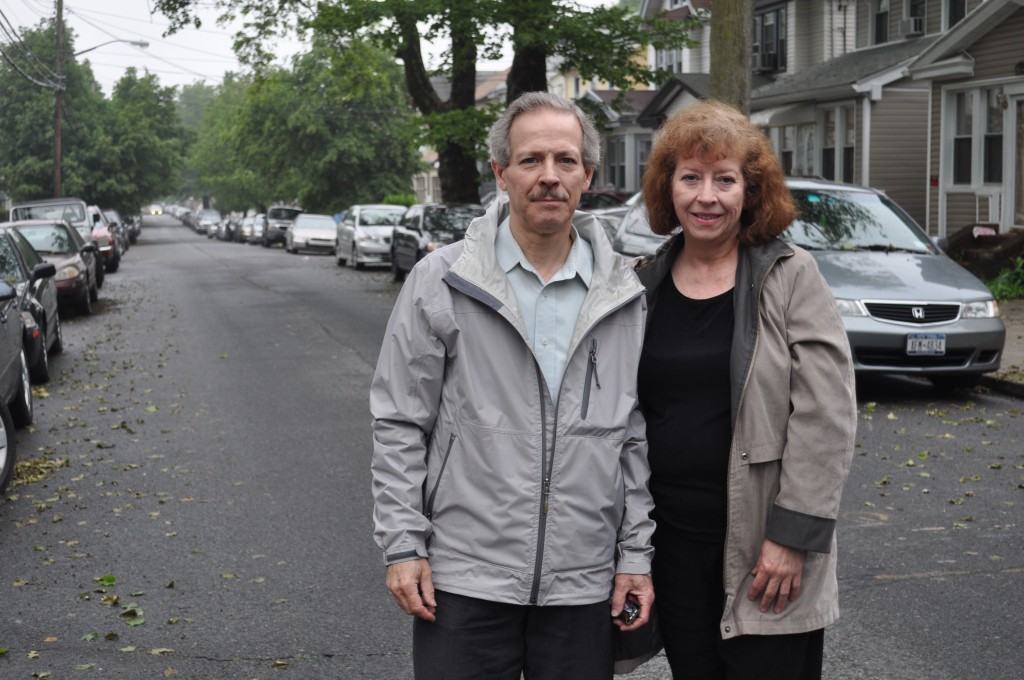 Mildred Facinelli (right) and her husband, Steven, are hoping that Community Board 9 will approve three requests for speed hump installations, including one on their block on 98th Street in Woodhaven. Forum Newsgroup photo by Luis Gronda.

Residents at a local community board meeting got a chance to chime in on the potential addition of speed humps to roads in Woodhaven before the official vote.

At the Community Board 9 meeting on Tuesday, May 8, Chairperson Andrea Crawford announced that, when the board next meets in June, it would vote on whether or not to install speed humps in three areas within their district.

Crawford said that they wanted to give residents who live in those areas a chance to speak in support or against the speed humps a month prior to the board voting on it.

Mildred Facinelli, who lives on 98th Street, was first up to speak.

She said that she is in support of the speed humps because she has seen two children hit and her neighbor’s car get sideswiped, both by people speeding in their cars. She has also seen people speeding on dirt bikes in both directions. The street is a one-way, northbound street.

“I’d like to rename my street, NASCAR Street,” Facinelli said.

She came with 98 signatures in hand from people that live on 98th Street. She said that there have been no fatalities due to the speeding, but she hopes to get a speed hump installed on her block anyway.

Other 98th Street residents that were not at the meeting also say that their block needs the speed humps.

Christine Ballek, who lives across the street from Facinelli, said that part of the problem is that many people who are driving on 98th Street often speed up to pass by the traffic light at the end of the block. She also said that she had her car damaged by a speeding vehicle that was traveling in the wrong direction while her car was parked.

Her parked car was hit so hard by a speeding car that one of her tires was facing the other direction after the crash.

“They’re really reckless,” Ballek said. “They really need a deterrent.” “You should probably have two on this block,” said Tom Nevin, another 98th Street resident.

He said that although no one has gotten seriously hurt or killed by a speeding car, it’s only a matter of time.

Steven Facinelli, Mildred’s husband, said the curve at the end of the street slightly deters drivers from speeding, but that a speed hump is still needed.

“If it wasn’t for that curve, they’d go even faster,” he said.

Wendell said that over the three years that he has been involved in the WRBA, he has been getting increased complaints about people speeding in the neighborhood.

He said that he is in favor of installing those three speed humps and adding more wherever possible.

“In fact, if the city ever developed speed bumps with deadly spikes, we’ll be in favor of them,” Wendell said.

Crawford said that the city Department of Transportation informed CB 9 that those three locations meet their criteria for installing a speed hump. CB 9 will vote on the speed humps at their next meeting, on June 12.

According to a spokeswoman, the DOT considers factors like street width, use and vehicle speed when deciding if speed humps are needed.