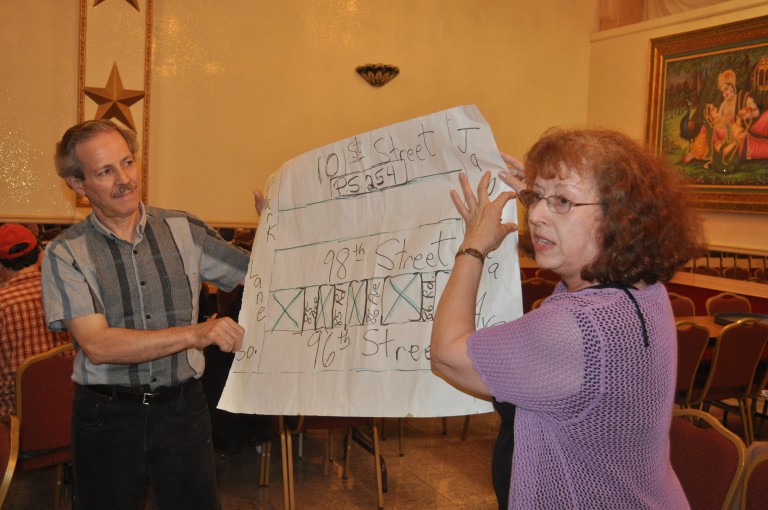 Mildred Facinelli and her husband, Steven, plead their case for a speed hump to be installed on 98th Street in Woodhaven. Forum Newsgroup photo by Luis Gronda.

Woodhaven residents who have been asking drivers to slow down on their block finally got their wish on June 12, as Community Board 9 (CB 9) approved a request for speed humps at its June meeting.

Given the opportunity to speak to the board before they vote on it, Mildred Facinelli, a resident of 98th Street, told CB 9 during that meeting that her block needs the speed humps because she has seen two children hit and another car’s mirror sideswiped by speeding cars. She gave the group a petition including 98 signatures from people living on her block that are also in support of the speed hump.

Facinelli and her husband, Steven, were back again on Tuesday night’s meeting, pleading that CB 9 say yes to the speed humps.

“People fly up the block, 55, 60, whatever they can do,” Facinelli said. She thinks people speed there because 98th Street doesn’t have any intersections with another street. Facinelli said 96th Street, which has four intersecting blocks, tends to slow down traffic.

When it came time to vote on the request, CB 9 agreed with Facinelli’s concerns and approved all three of the speed hump proposals. They also approved a speed hump request on Austin Street between Lefferts Boulevard and 127th Street in Kew Gardens.

CB 9 also voted to approve a community residence, which will be able to house 10 people with intellectual and developmental disabilities, at 88-38 Woodhaven Boulevard in Woodhaven.

The plan calls for a two-floor house with a basement. On the first floor, there will be six bedrooms, two bathrooms, a living and dining area and a kitchen. The second floor will have four bedrooms, one bathroom and a dining area and kitchen.

Joyce Levin and Linda Tempel from HeartShare Human Services, which proposed the Woodhaven group home, were at the meeting to discuss the residence.

They said that at least four to five staff members will be in the house at all times and three people will be staying overnight.

It will be about 12 to 18 months before the house is open, according to both Levin and Tempel, because they have to tear down the existing house at that address and build a completely new house from scratch.

The house will also have a parking garage, though many of the people living there will be taking public transportation, according to Levin and Tempel. This revelation came after board members asked if the group moving in would affect parking for the rest of the neighborhood.