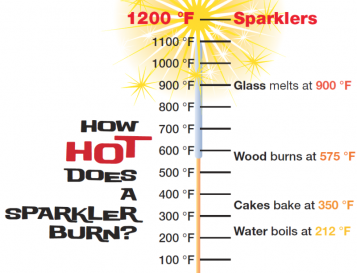 First comes the BBQ, then the apple pie, and then the biggest display of our nation’s independence, the fireworks, of course. The often jaw-dropping display over the Hudson River are enough to captivate most of us, but every year, although all consumer fireworks are banned in the city, a few patriots engage in their own celebration with sparklers and explosives.

“We want everyone to enjoy the Fourth in the city, but fireworks in the hands of an amateur are extremely dangerous and illegal,” said Mayor Bloomberg in a press release from last year about the city’s crack-down on illegal fireworks.

According to the U.S. Consumer Product Safety Commission, in 2010, approximately 8,600 people were treated in hospital emergency rooms for injuries associated with fireworks. Children and young adults under 20 years old are responsible for 53 percent of injuries. In an effort to keep New York City out of those statistics, Police Commissioner Kelly said in the same press release as the mayor, that the city plans on continuing its commitment to confiscate all illegal fireworks and enforcing the city’s steep $750 fine for discharging the banned explosives.

Tips for reduced risk of injury

•Never let small children use fireworks of any kind.

•Never try to relight fireworks that have not fully functioned.

•Alcohol and fireworks do not mix. Designate a sober adult to light the fireworks.

•Keep a bucket of water or garden hose handy to douse used sparklers and fountains.

•Soak used fireworks with water and dispose of them in a metal trash can.

•Teach children not to wave sparklers or run while holding them.

The U.S. Fire Administration adds that injuries may result from being too close to fireworks when they explode. So never lean towards a firework that has been ignited. Furthermore, they advise that homemade fireworks can lead to dangerous and unpredictable explosions and should never be used.

A minor burn is red and painful and sometimes results in a blister – for instance when a child picks up an old sparkler that hasn’t cooled down.

Hold the affected area under cold, running water for at least 10 minutes.

If a child is burnt and the area is blistered on an area larger than the size of the child’s palm, you should seek medical treatment.

Special care should be taken if the burn is on a young child or an elderly person. All deep burns of any size will require urgent hospital treatment.

Once the burn has been cooled for at least 15 minutes, the burn can be inserted into a sterile plastic bag or wrapped in a nonstick dressing.
If clothing is on fire

Stop the casualty panicking or running – any movement or breeze will fan the flames.

Drop the casualty to the ground and wrap them in a blanket, coat, or rug. Ensure they are made from inflammable fabrics such as wool.
Roll the casualty along the ground until the flames have been smothered.

If clothing has caught on fire, it is more than likely that the burn will be severe. A severe burn is deep and doesn’t hurt as much as a minor one due to damaged nerve endings.

Instruct a helper to dial 911
Make the casualty as comfortable as possible, ideally lie them down and elevate their legs, again to reduce the risk of clinical shock.
Whilst cooling, remove any constricting items such as jewelery or clothing from the affected area unless they are stuck to the burn. Wear disposable gloves if they are available.

The U.S. Fire Administration’s ultimate tip for safety is to attend public fireworks displays and leave the lighting to the professionals. As a New Yorker you have the privilege of watching the nation’s largest display of pyrotechnics over the Hudson. According to the Mayor’s office, this eye -grabbing show uses 55 times more fireworks than the average American city display. So head to Manhattan’s west side and celebrate this independence day injury-free.