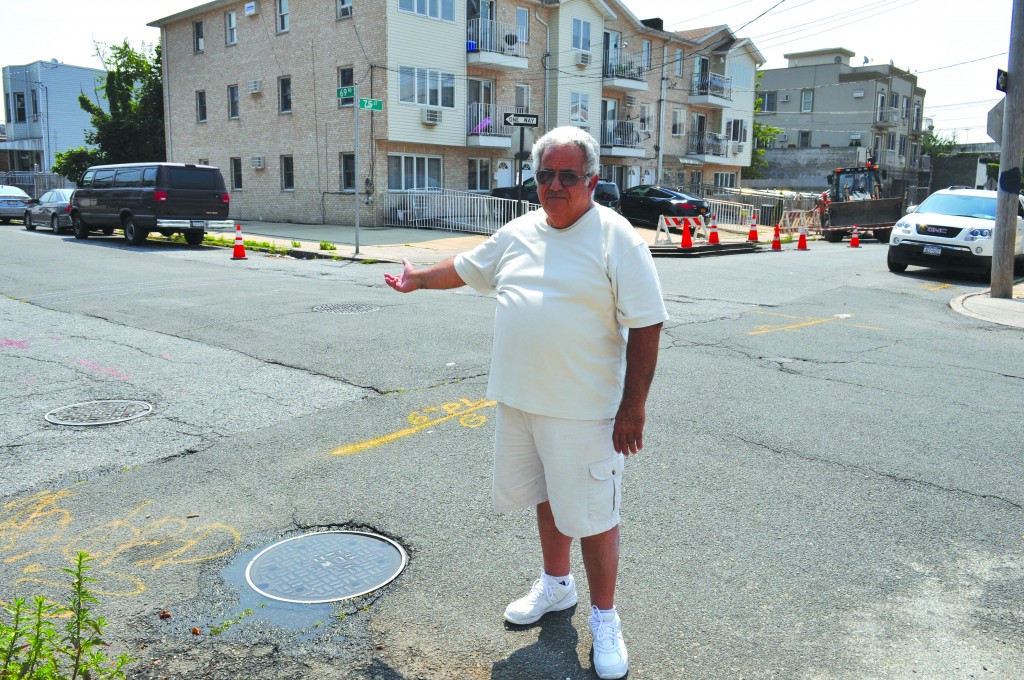 Jerry DeStefano, a Middle Village resident who lives on 75th Street and 69th Road, has been requesting a speed hump and an all-way stop sign since 2005. Forum Newsgroup photo by Luis Gronda.

For the last seven years, Jerry DeStefano has been trying to get a speed hump or a stop sign along 69th Road in Middle Village.

He has written numerous times to local elected officials—dating back to 2005 when Dennis Gallagher was the councilman representing Middle Village—and to the Department of Transportation but to no avail.

DeStefano has been asking for an all-way stop sign at the intersection of 75th Street and 69 Road as well as a speed hump on 69th Road.

The reason, DeStefano said, that he is requesting the two measures is to slow down traffic because he often sees cars speeding down the long street.

“By the time you get here, you’re doing 65 miles per hour,” said DeStefano, who lives on 75th Street and 69th Road.

He said that cars often drive down the street he lives on to bypass the traffic on Metropolitan Avenue.

The number of cars, DeStefano said, often causes congestion on his block during the morning and afternoon rush hours. There is a stop sign at the end of his block, but that is not enough according to DeStefano.

He has written letters to DOT and State Senator Joe Addabbo expressing his concerns and requesting that the street be looked at to see if it qualifies for a speed hump or a stop sign.
According to a letter given to The Forum by DeStefano that was dated January 2012, the DOT denied his request for the all-way stop sign in December of 2011 saying it did not meet the necessary recommendations.

“Experience has shown that traffic patterns and traffic growth in New York City do not change within a few months,” the letter read, which was written by Queens DOT Commissioner Maura McCarthy and sent to Queens Borough President Helen Marshall. “Therefore we do not initiate a new study at any particular location for a minimum of 18 months unless very unusual circumstances are found to exist.”

The letter also read that DOT was investigating the speed hump request at that time and a response was due by April 2012.

DeStefano said that DOT denied the speed hump request because there were too many driveways on that street.

According to the DOT, the city agency is currently studying the possibility of putting a speed hump on 69th Road between 73rd Place and 78th Street, which includes 75th Street.

DOT officials hope to complete the study in the next few months. As for DeStefano’s request for an all-way stop sign, DOT said it studied that area last year and it didn’t meet the federal guidelines for a stop sign.

Community Board 5 recently asked DOT to do a new study at the intersection. According to the DOT, the agency is reviewing CB 5’s request and will be in contact with the board.

The criteria the DOT looks at to install a stop sign includes the intersection’s traffic volumes and its accident history.

Melissa LiCausi, a resident who lives about a block away from DeStefano, witnessed a bus crash a couple of years ago due to speeding.

She said that a bus ran through a stop sign on 75th Street, coming off of Cooper Avenue, collided with another car and wound up on its side.

LiCausi said that because of the danger the speeding cars pose, she does not let her three children play on the street anymore.

“I’m afraid to let my kids go out there,” she said.

LiCausi said she hopes the city will install a stop sign or speed hump near her house.

“Just give us something so that they slow down,” she said.