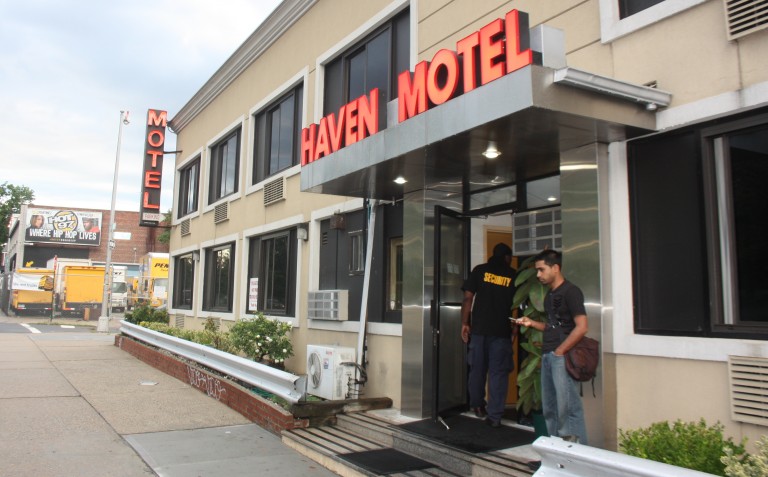 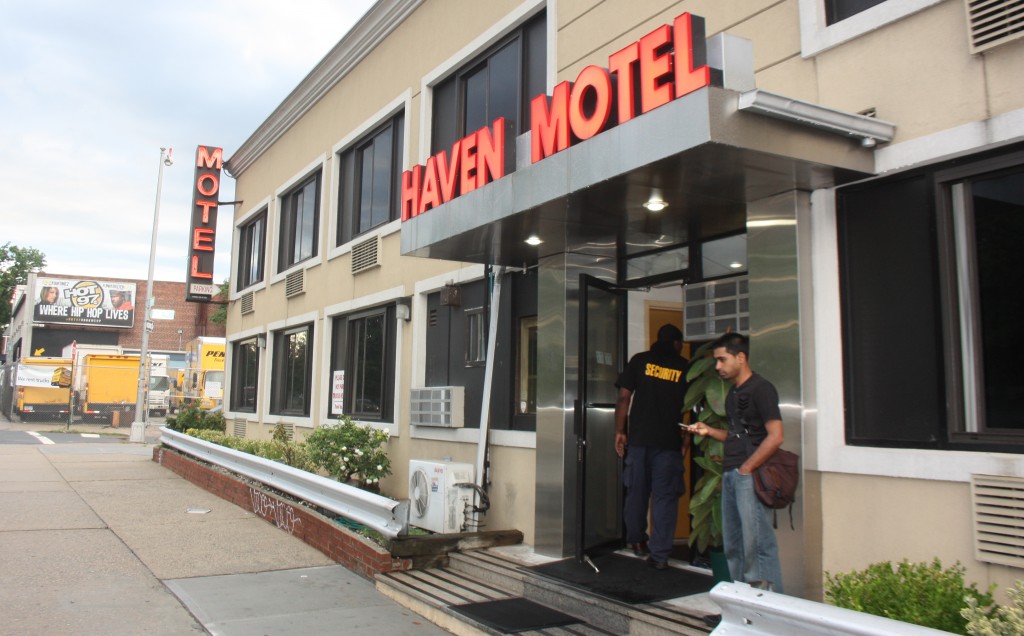 Neighbors of the Haven Motel in Rego Park say illicit activity has increased there since the NYPD and Queens District attorney cracked down on prostitution at two other Queens motels. Forum Newsgroup photo by Jeremiah Dobruck.

Neighbors claim that prostitution and drug deals at a Rego Park motel have intensified in the last two months since a crackdown on two other problem motels.

As far back as 2005, residents on 68th Avenue behind the Haven Motel complained about illicit activity spilling out of the location and onto their street.

In March, the Queens District Attorney and NYPD shut down two motels—one in Jamaica and one in Kew Gardens—for allegedly welcoming prostitution.

Neighbors of the Haven said that’s right when they started finding condoms littering their street, drugs being exchanged and men seeking sex.

“I’m not going to be the moral police of people who do rendezvous. To me, that’s not my complaint. But when I see what looks like a drug deal going down, that’s another story,” said Richard Slizeski who lives on the block behind the motel. “When I see what clearly seems to be a bad arrangement of a prostitution deal going down and then screaming and yelling at each other as he’s trying to make his way to the car and her chasing him in the middle of the street at one in the morning—where’s our quality of life?”

Last month, Slizeski and four of his neighbors—who asked not to be identified for fear of reprisal—gathered to say their problem has been ignored since it began to intensify over the last three months.

Police and the motel staff, however, say the situation was mostly remedied long ago.
Mohan Patel, the motel’s manager, said he’s seen no increase in drug use or prostitution. After meeting with local politicians and neighbors in 2005, Patel installed security cameras, hired a security guard and posted signs warning customers not to disturb neighbors.
Back then, the motel may have had a problem, but not any more, he said.

Those measures are still in place, but Slizeski said that hasn’t helped since the two other hot-sheet motels were closed.

“Ultimately they made some good-will efforts and I would like to acknowledge that, but I think what we’re seeing is you’re getting an even different kind of crowd of what was there before, and I think when you start seeing evidence of selling drugs, you’re talking about a whole different class of people,” he said. “It’s a safety concern beyond anything else.”

A resident of 68th Avenue, who asked to be identified only as Adeline, said she’s lived on the street for 20 years and this is the worst she’s seen it.

“We don’t understand why this motel is being sanctioned as a haven for that,” she said, adding that her complaints have been consistently rebuffed by police.

In June, she attended the 112th Precinct Community Council meeting to seek answers.
When she raised the problem to Deputy Inspector Christopher Tamola, the precinct’s commanding officer, he quickly acknowledged the issue.

“The Haven Motel has been on our radar for a long time, and we’ve done operations over there over the years,” he said, but then he attributed Adeline’s complaint to something simple—a change in smoking laws.

“A lot of these establishments now—bars, hotels, restaurants—don’t allow smoking inside anymore. People go outside and they smoke, and I’m not saying there’s never illegal activity going on, but a lot of times these complaints that we get from bars, hotels and restaurants stem from the employees and people who are staying there coming out into the street and talking very loudly,” Tamola said.

Like the motel’s manager, the deputy inspector said the illicit activity has largely disappeared.

“That’s where I would disagree,” Slizeski said. “When I moved in—it’s been about five years—I didn’t see the drug deals going down. I’ve walked my dogs and I’ve seen the drug deals. And to me, that’s very disturbing on this block.”

When she was informed by The Forum what neighbors were saying, she insisted nobody should have to live like that.

“Once they start with prostitution then everything follows,” Koslowitz said. “I’m going to be very, very vigilant on those complaints and make sure that something is being done.”

When he answered Adeline’s concerns at the Precinct Community Council meeting, Tamola said police can only do so much.

“That is one location in the entire precinct. And we have concentrated on it,” the deputy inspector said. “But again, [the Haven has] been there for a very, very long time. The other hotels have closed down, they’re still holding on. Nothing would make us happier than if the place closed down and they made it into a supermarket. But for the time being, they’re still there.”

“The police can’t be burnt-out in trying to enforce if prostitution is going on,” she said. “It’s their job to make sure that that doesn’t happen.”