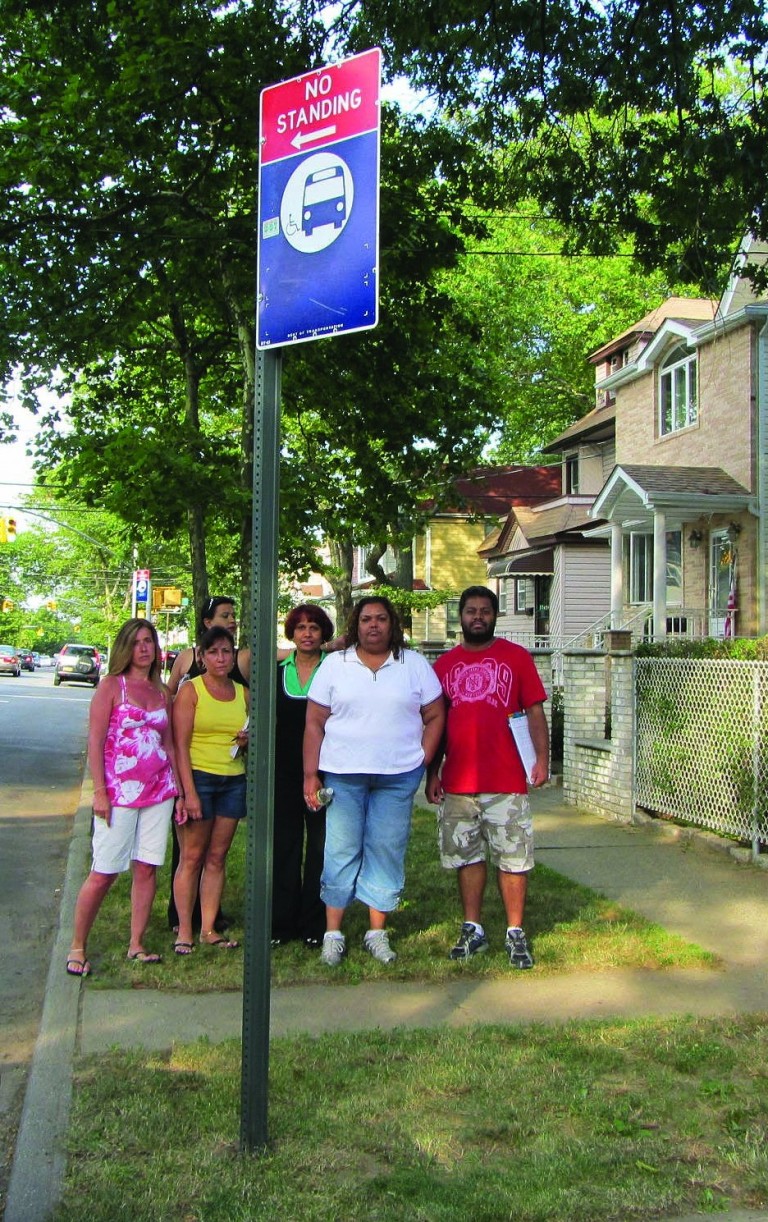 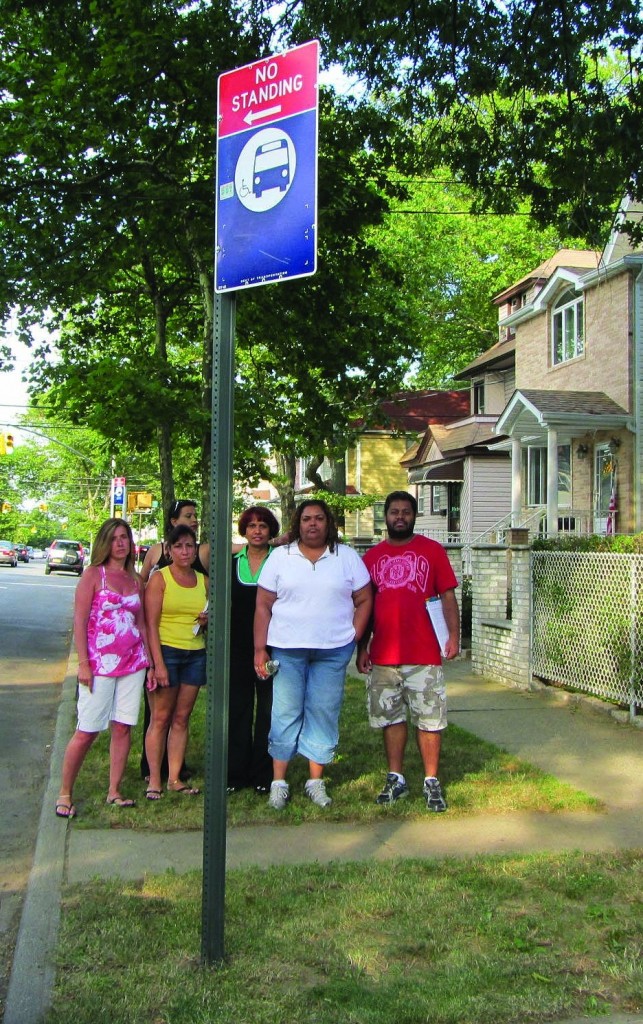 Sherry O’Neil and Geraldine Bruccoleri (at right) with some of their neighbors near the new bus stop they say has turned their lives upside down, They want the MTA to undo what they feel was unjustly done. Forum Newsgroup photo by Jeremiah Dobruck.

Geraldine Bruccoleri got up on the morning of June 27, waved to neighbors and went to work as she normally would. But, upon returning to her South Ozone Park home later that evening, she found herself face-to-face with an uninvited post erected on her street, 109th Avenue.

“My neighbors and I found a bus stop in front of our homes,” said Bruccoleri, a 40-year resident of a neighborhood that she says is in upheaval as a result of MTA’s recent rerouting of the Q41 bus service that went into effect on July 1.

Local residents, including Bruccoleri, said they were completely taken by surprise by the MTA’s decision to reroute the bus from from 111th Avenue to 109th Avenue between 111th and 128th streets.

“We were not notified by MTA. No one on the bus knew. Nothing at the bus stop. No signs posted,” the homeowner complained. “I know someone who tried to catch the bus on 111th, and it wasn’t there.”

Sherry O’Neil, a 40-year resident of the street and neighbor of Bruccoleri, also expressed her “overwhelming frustration with the transit authority.”

“Why no letter in our mailbox?” she questioned. “When election time is here, there are so many flyers. All of that is communicated well. Something like this—that impacts us greatly — and there’s no communication?”

However, an MTA spokesperson defended the agency’s efforts to inform the public of the changes in a written statement: “Advance notice of the changes was given to customers through service notices posted on the buses, and on the MTA website. Bus stop notices were posted [by MTA Road Operations] at all of the affected former bus stops; however, many of these bus stop notices were vandalized and removed by other parties, and had to be reposted.”

The MTA also stated that per their standard procedures local elected officials and community boards were notified by letters of the proposed changes earlier this year.

For O’Neil, perhaps what is most upsetting about the MTA’s failure to make her neighborhood aware of the impeding change, is that at a September 2011 Community Board 10 meeting, the board voted 35-1 against the rerouting proposal.

“Where is the responsibility to let us voice our opinions? [The MTA] still went against what the community was telling them. It doesn’t matter if 100 of us were there,” O’Neil said.

Although neither O’Neil nor Bruccoleri attended the Community Board meeting last year because, as they stated, there was no indication to them that their block would be soon be home to bus services, Community Board 10 Chairwoman, Betty Braton, said their opinion was represented in board votes.

“We indicated we would prefer it not to be changed.” Braton continued, “What the Community Board expressed was purely advisory in this instance so [ the MTA] went ahead with it anyways.”

The MTA says that the 109th Avenue revision streamlines the travel path of the Q41 through South Ozone Park instead of circuitously diverting to 111th Avenues. This eliminates several turning maneuvers, providing faster and more reliable service to customers.

But, for O’Neil, her worst fears have been realized since the bus began running on her street.

“Only July 5, my car was hit. I didn’t see it happen personally, but several neighbors report seeing the car swerving around the bus to hit my car. If I had small children, there would be a for sale sign in front of my house already.”

O’Neil, who said she plans on selling her house if things do not change, also can no longer park in front of her home. Neither can Bruccoleri who says due to poor planning the bus stops are not diagonal on opposite sides of the block, but instead parallel leaving residents with practically no parking.

Quality of life is also a major complaint of the neighbors who say the bus stop comes with all sorts of problems in addition to the obvious.

“There is now garbage that we are constantly cleaning up. My neighbor had people sitting on their front steps who were waiting for the bus. This is what we have to contend with. It’s crazy,” said O’Neil.

While both women agreed that some may be happy with the change, they are in the minority.

“People on 111th knew what they were getting into when they bought their house. They purchased them with the bus route along their street. We bought them here 40 – 60 years ago without that,” said O’Neil.

As of press time, Bruccoleri had collected a petition with almost 300 signatures to reverse the changes.

Local officials have weighed in on the issue as well.

State Assembly Member, Mike Miller (D- Glendale) sent a letter to the MTA in May requesting a reversal of the rerouting, stating “This plan doesn’t seem to make sense.”

The MTA said in a statement, “There are no plans to revert back to the former paths.”

Bruccoleri and O’Neil will not be giving up any time soon. They plan on attending a MTA meeting later this month to fight for a return to their former bus-less street.

“We would like to have MTA officials come and see what they did. It has impacted this community, said Bruccoleri. “At least fix the mess they made for us.”