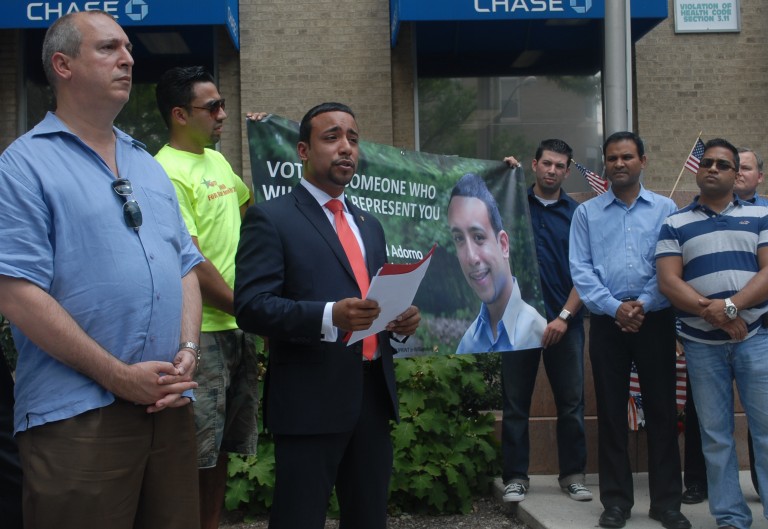 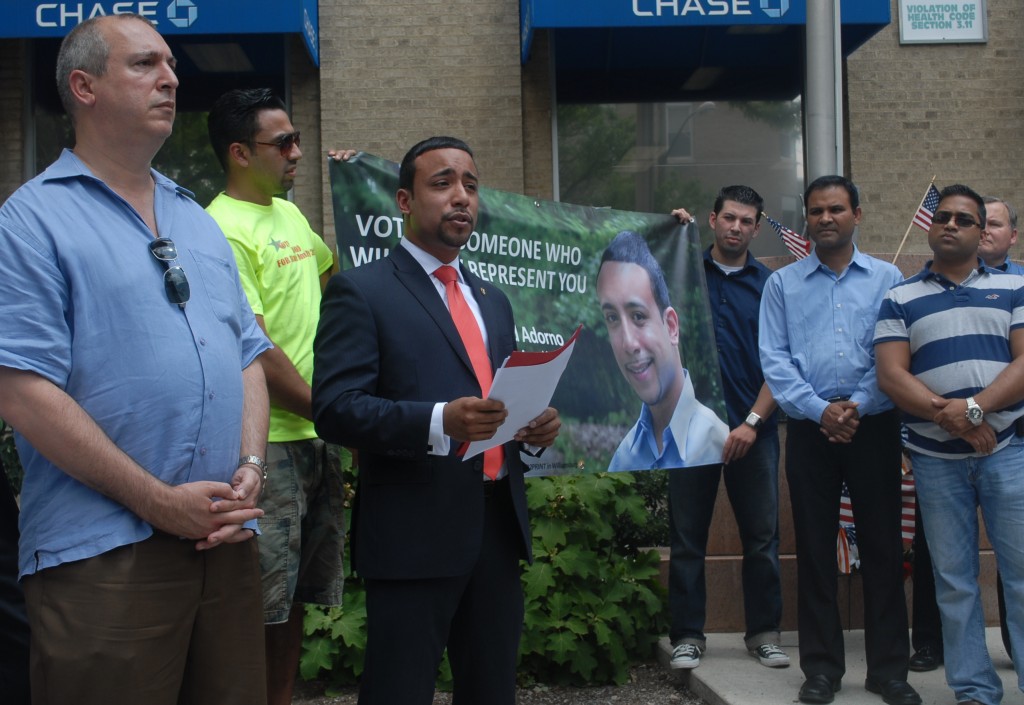 Etienne David Adorno, a 27-year-old from Woodhaven, announces his candidacy for State Assembly with former Assemblyman Adam Clayton Powell Jr. standing at his side. Forum Newsgroup photo by Jeremiah Dobruck.

Assemblyman Michael Miller (D-Woodhaven) will have to face a primary to retain his seat now that a 27-year-old vying for his first public office has challenged him.
Etienne David Adorno, a lifelong Woodhaven resident and recently an aid for Councilman Robert Jackson, wants to deny Miller a second term.

On Monday, Adorno told a small crowd of supporters that he doesn’t plan on leaving Woodhaven—he plans on being its next assemblyman.

Last week, he submitted more than 3,000 signatures to get onto the Democratic ballot for the 38th State Assembly, which encompasses all of Woodhaven and pieces of surrounding communities like Richmond Hill and Ozone Park.

At the campaign kickoff, Adorno did not hold back when on the criticism of Miller.

“A fresh perspective is within reach,” Adorno said. “We need someone who we can call on for help, not some mysterious entity far away in Albany, someone who we can point to proudly and say ‘yeah, I know him, he’s my assemblyman.’ ”

About a half dozen times, Adorno explicitly or tacitly accused Miller of being an absentee representative, more in touch with Albany than Woodhaven.

Adorno said he pounded the pavement himself, seven days a week knocking on at least 2,000 doors to collect the signatures he needed to get on the ballot.

He said that out of all the people he spoke to during that drive, only 14 recognized Miller’s name.

There may be a reason for that though, Miller told The Forum in a phone interview.

Miller also alleged that the vast majority of Adorno’s signatures aren’t valid but said his campaign isn’t trying to knock him off the ballot for the Democratic primary on September 13.

Regardless, Adorno is emphasizing the outsider, local nature of his first run for office—he decided to run for State Assembly because the 2013 City Council election is too far off.

“We’re the definition of a grassroots campaign,” Adorno said.

Adorno is undeniably young, but he said he has the right experience to run. He told the crowd that he’s a member of Community Board 9, is involved in civic groups like the Woodhaven Residents’ Block Association, and cut his teeth doing constituent services for former Assemblyman Adam Clayton Powell Jr. and Councilman Robert Jackson.

“That’s really what made me realize that I have a knack for working with people, working with the community and helping local residents. And this was in northern Manhattan where I don’t even live,” Adorno said. “People will not always remember what you say, but they will remember how you make them feel. And even though they may not remember my name in northern Manhattan, they certainly remember my face, and they remember the positive feelings I gave them when they really needed help.”

Powell, a longtime friend of Adorno and his family, was at the announcement to lend some political clout.

Just a few hours after Adorno’s kickoff though, mud was already slung.
Miller said that a few months ago, Adorno had walked into his office and promised he wouldn’t run for office against Miller.

“Evidently he had a change of heart or his word is no good—one or the other,” Miller said.

Adorno said, however, that his conversation with Miller was to warn him that residents had begun approaching him to run.

“My long-time-ago conversation with Miller was only partially quoted. I told him then that I had been recruited by community residents to run,” Adorno said. “At that I point I decided not to press forward. Since then many more individuals and groups have been calling for me to run, enough to compel me to respond.”