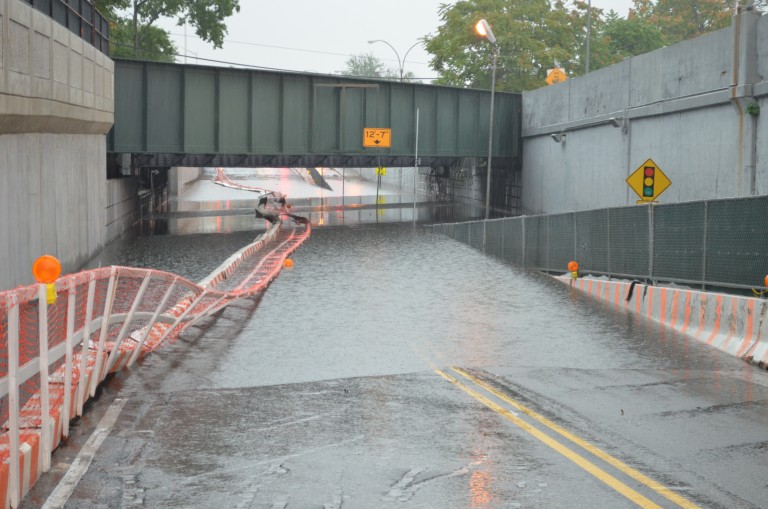 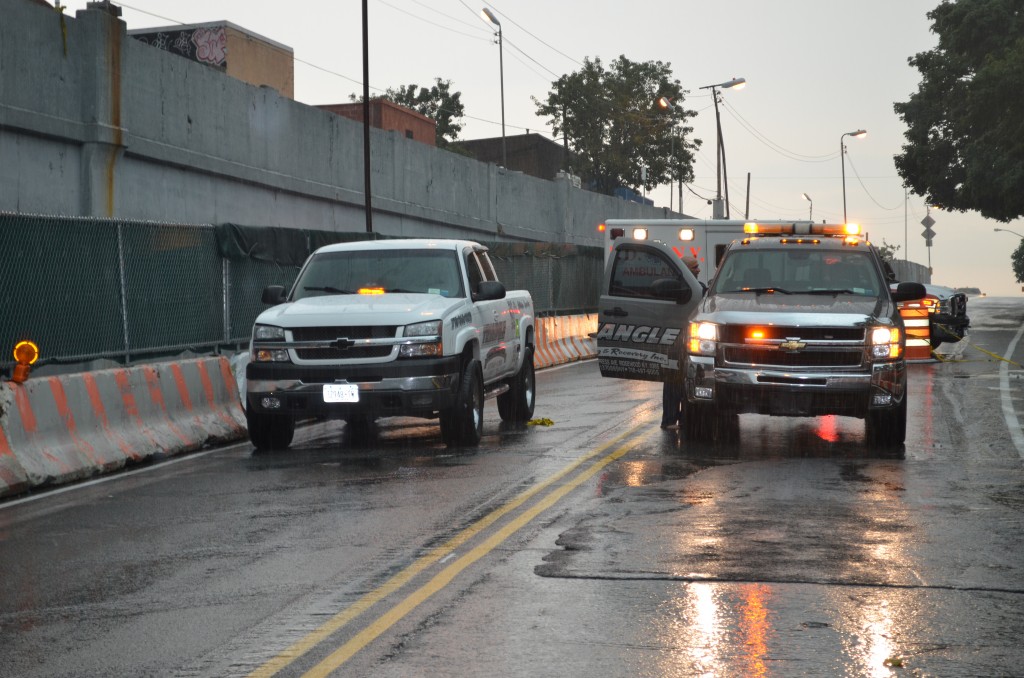 Tow trucks were called to the Cooper Avenue tunnel to help motorists stranded by flash flooding beneath the underpass well known for its dangerous flooding conditions. Forum Newsgroup photo by Natalia Kozikowska.

Three elderly motorists came face to face with potential disaster on Wednesday when the Lexus sedan they were travelling in took on water during a flash flood in the Cooper Avenue Tunnel in Glendale.

Firefighters plucked the shaken trio of senior citizens from the car that was submerged in the tunnel, a notorious hotspot for flash flooding in the community. Rescuers got Joseph Laurence, 81 and his 79-year-old wife Mary along with Sr. Claudia Bradshaw, an 86-year-old nun, safely out of the car, one of several vehicles trapped beneath the busy underpass.

But the hazards presented by the intense rain, strong wind and dangerous lightening cans as no surprise to Michael Lanzieri, of Triangle Auto Body, called in with his crew, to help remove cars from the flooded tunnel. For as long as he could remember Lanzieri said, the tunnel has been flooding out.
“We’ve been called here numerous amounts of times…the flooding is very, very strong when the rain comes – the sewers can’t handle it… vehicles get stuck,” said Lanzieri. “Here, Metropolitan Avenue between the cemeteries – it’s crazy.”

Residents and civic activists echoed similar sentiments, most of them fed up with the lack of action taken by the city to remedy dangerous conditions that recur with every heavy rainfall. Long-time Glendale resident Laura Sarco said she is frightened to drive through the town during heavy storms.

“It’s dangerous to drive here in those types of weather conditions. There are so many streets in Glendale that are dangerous … Metro, Woodhaven – it makes me nervous,” said Sarco I feel that at any moment my car can get stuck.”

The water rose quickly throughout the area. In just minutes residents on 79th Lane and 78th Road watched as garbage pails were carried swiftly down the street and water crept up past balusters and railings, climbing up the front stoops of home after home.

Residents throughout Queens, Brooklyn and parts of Long Island called local news channels with reports of dime-sized pellets of hail pounding down on windows and doorsteps while others panicked over their basements taking on water.

Residential properties were not the only ones to feel the wrath of the storm. Merchants along several commercial strips in the area and nearby Forest Hills had flooding issues at their businesses. Cohen Fashion Optical, located on 71st Avenue, took on between six and eight inches of water in their basement. “It was terrible,” said Carl Gil, manager of the store. “We had a lot of damage as far as our supplies and stuff,” he added.

Despite the fact that Wednesday’s run-in with Mother Nature brought residents out onto the street, where some stood in waist deep water—there was no element of surprise as they watched car tires disappear beneath murky water filling the street.

The storm was yet another reminder that Glendale sewers cannot bear the burden exerted on the sewer system under storm conditions.

Kathy Massi, President of the Glendale Civic Association, believes that the Cooper Avenue tunnel is not the biggest problem residents must face during a heavy down pour.

“I think what people have to be concerned about is 77th Avenue. Once again they got five feet of water. The residential homes [flooding] are my concern and right now. The homes are really damaged,” she said. “They just finished dealing with the last flooding, and we thought they had this under control, and obviously it’s not.”

To the dismay of Massi and other civic leaders, Glendale and its neighboring towns have long been vulnerable to intense flooding conditions. The problem impacted so many residents that in October of 2007, Community Board 5 (CB5) developed a special Flood Mitigation Committee to raise community awareness and begin work on the problem with the Department of Environmental protection (DEP).

First vice chair of the committee, Walter Sanchez, says that inspections of the sewers had been done in an attempt to diagnose the problem. “There was a spot around Atlas Park that we actually had them, [the DEP], go down into the sewers and take a look to see if there were problems there,” Sanchez told The Forum. The investigation determined that a water pump under the Cooper Avenue Tunnel was broken and needed repair.

The Flood Mitigation Committee also worked with the DEP to investigate and fix and investigate sewer lines in Maspeth in Middle Village. A spokesperson for the DEP, Corey Chambliss, said that the agency had inspected and cleaned catch basins at 115 flood prone locations in anticipation of heavy rainfall.
But some insist that the answer is not as simple as cleaning out catch basins. “There is a much bigger issue,” Masi said. Eric Yun, a spokesperson for Council member Elizabeth Crowley, said that their office is working closely with the DEP to help alleviate flooding. He encourages constituents to file claims associated with any storm in which they sustained damage.

One of many Glendale residents, Ed Flaherty, totally agrees that targeting catch basins is not the remedy. “The water went out the front drain through the house out the traps in the yard and into the garage, then into the basement through the cellar door,” he said. Although the damage to his walls was not as extensive, about two inches of backed up sewage water ruined his carpets.

“I talked to quite a few people who had problems from Wednesday’s rain,” he added. “We need new sewer lines put in.”

David Tonjes, Assistant Professor in the Department of Technology and Society at Stony Brook University, says that residents may endure a much bigger problem if the problem persists.

“New York City is a complicated situation because it uses a combined sewer system – the same pipes carry sewage and storm water,” he said. In short, when the sewers become overwhelmed, the water pushed back into people’s homes may be contaminated, posing health risks.

According to Tonjes, Glendale’s problem is partly associated with its geography but he does not rule out that the flooding problem may be exasperated by poor maintenance.

CB5 will look to re-establish the Flood Mitigation Committee, when their regular meeting schedule kicks in next month, according to Sanchez. Perhaps they can pull a few strings to get some help themselves – their office was one of many flooded as a result of Wednesday’s rain.

Natalia Kozikowska contributed to this story