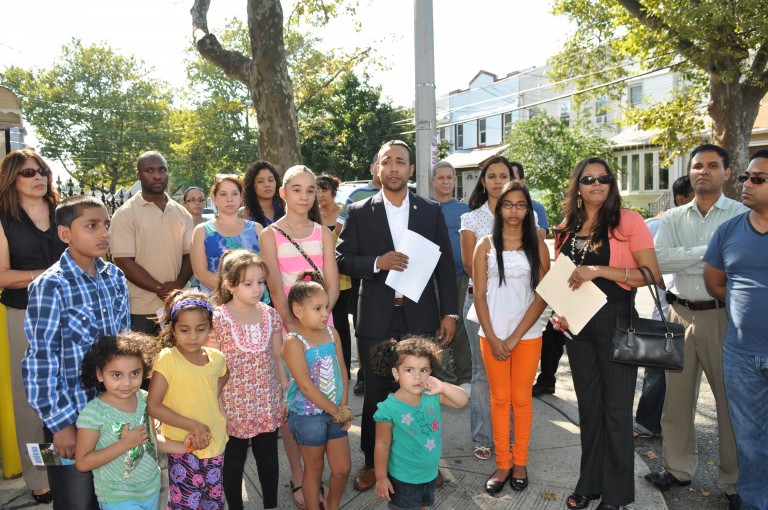 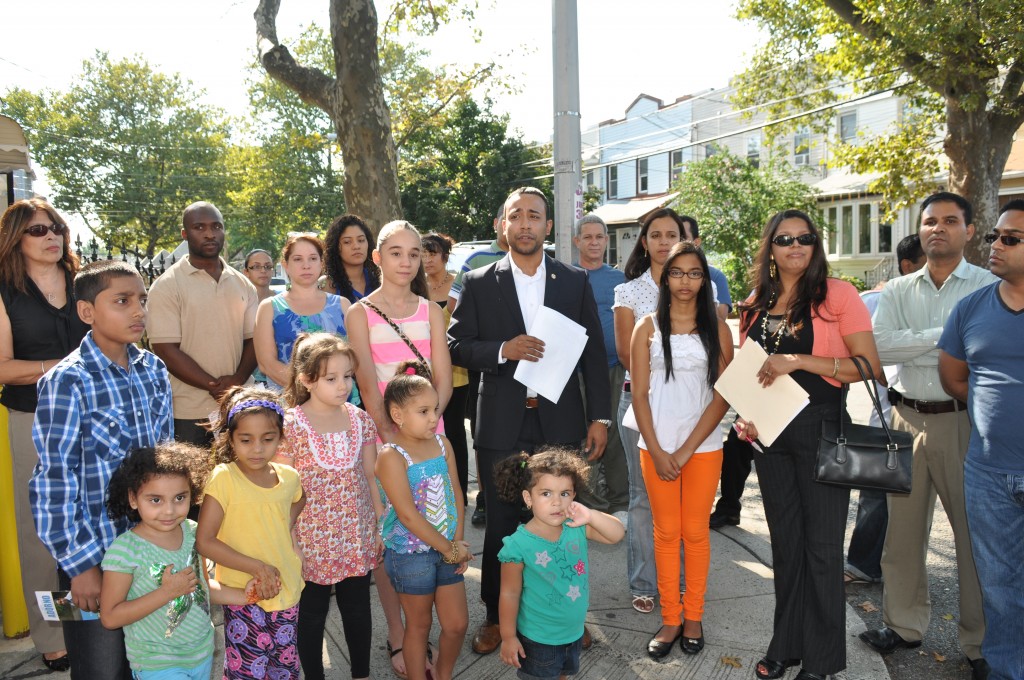 Etienne David Adorno (center), along with several residents of 80th Street in Ozone Park, ask the Department of Transportation to put a stop sign on the corner of their block at a press conference on Monday afternoon. Forum Newsgroup photo by Luis Gronda.

Residents living on an Ozone Park street have been asking for a stop sign to be put on an intersection that has a history of speeding and accidents.

In a Monday afternoon press conference, Etienne David Adorno, a democratic candidate for the 38th State Assembly seat and a member of Community Board 9, gathered several residents that live on 80 Street and 95 Avenue in Ozone Park, and asked the Department of Transportation (DOT) for a stop sign to be placed on that corner. He’s also asking for the same to be placed on 81 Street and 95 Avenue.

According to Adorno, the intersection is short distance away from P.S 64 and parents use that neighborhood to take their children to and from school.
He said that the stop sign would be a low cost option and would solve the problem of speeding cars on both intersections. 95 Avenue does have a stop sign going westbound.

He also cautioned that requests like this tend to take a long time to decide and that should not be the case.

“Something so low cost, something so simple should not be anything up to bureaucratic processes,” Adorno said. “Something like this, once requested, should be implemented.”

Two accidents have been reported this year at the 80 Street intersection, according to Adorno.

One accident occurred on May of this year, right in front of the home of Juan Guzman. He lives on the corner on 80 Street and 95 Avenue where the accident happened and where the press conference was held.

Guzman said that in the May accident, a car that was speeding down 80 Street crashed into the side gate of his house, destroying the bricks that surround the house.

He has since gotten it repaired, but that wasn’t the first time this has happened, Guzman said.

The 80th Street resident said that he has had to get that fencing replaced three times because of car accidents and it cost him $5,000 each time to fix it. Guzman now has installed two yellow poles, which are commonly seen at parking lots, in that area to serve as a buffer if anyone crashes into the gate again.

“How is that we have someone that lives in a residential neighborhood, having posts as if he lived on a commercial block?” said Adorno.

Guzman said that he hopes the sign is put on his block so that it can slow down drivers in that neighborhood.

“We need the stop sign. It can save everybody’s life,” he said.

A DOT spokesperson said that it has received Adorno’s request for a stop sign at 80 street and it will evaluate if that area meets its requirements for the sign.

According to DOT’s website, among the federal guidelines it looks at when studying a location for a stop sign is the amount of car traffic on an average day for 8 hours and 4 hours. This is to see if there is so much traffic on one street that it causes delays or conflict with another nearby street. It also looks at pedestrian traffic and if heavy traffic on a given street causes delays in crossing over to another area.

You can find the rest of the guidelines at nyc.gov/dot and clicking on the “FAQs” tab.