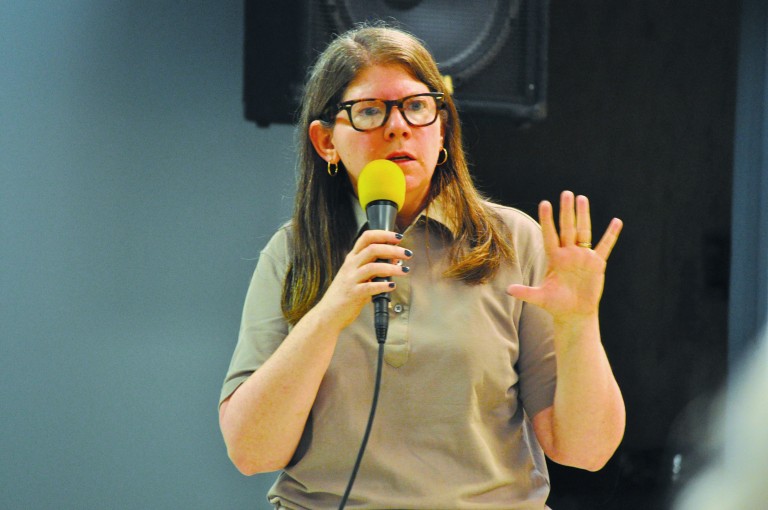 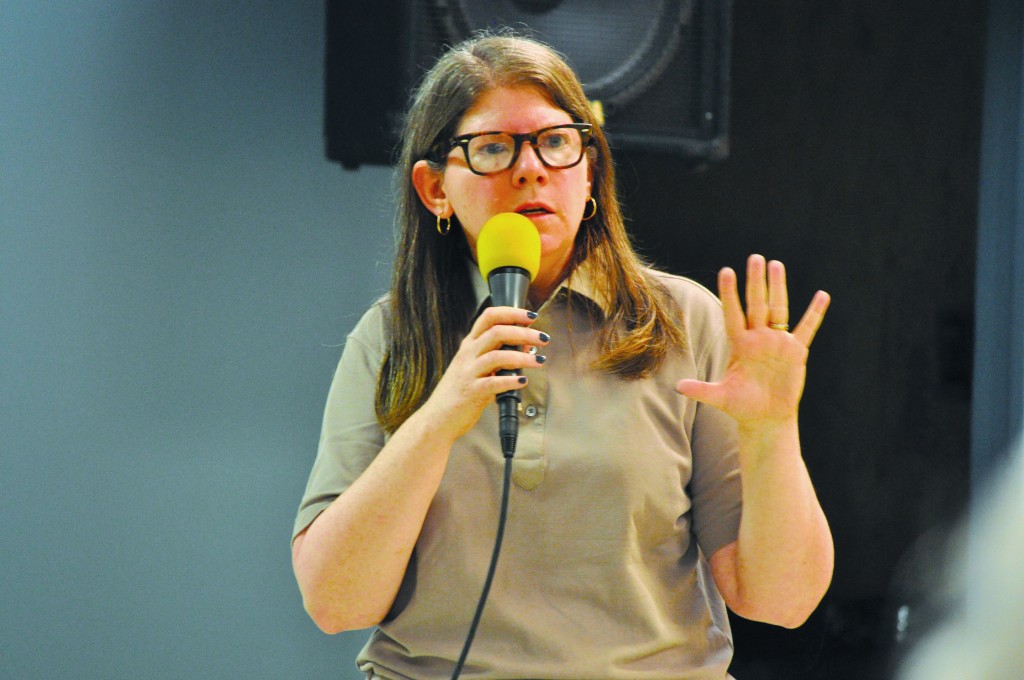 Andrea Crawford, who is chairwoman for Community Board 9, was part of the group petitioning for the 3.5 mile QueensWay bike trail, which would stretch from Ozone Park to Rego Park. Forum Newsgroup photo by Luis Gronda.

﻿In another discussion of an issue that has become a hot-button topic for several Queens neighborhoods, residents gathered last week to discuss the future of the abandoned tracks that used to be home to a busy transportation line.

There are two sides to this debate: one view is to revitalize the LIRR train that ran from the Rockaways to Rego Park many years ago. The other side wants to turn that long stretch of elevated land into a 3.5 mile bike trail called the QueensWay, which would run from Ozone Park to Rego Park and take care of most of that land that formerly served as a transportation hub.

The two groups got to present their side of the coin at a public forum held at the Queens Tabernacle on 96th Street in Woodhaven this past Saturday, September 29. The meeting was put on by the Woodhaven Residents’ Block Association and was primarily centered on Woodhaven residents getting their chance to hear both presentations and vocalize their questions and concerns about each proposal and how both would affect their daily life.

First up was John Rozankowski, a mass transit advocate, who is petitioning for the train line to be revived.

He argued that revitalizing the train line would enable people to travel easier from southern Queens to northern Queens and help the economy of all the neighborhoods that the LIRR would run through. The transit advocate said that southern Queens is blocked off from the rest of the borough, which he called “the great green barrier,” and residents often have to drive up Woodhaven Boulevard to get to the northern part of the borough. Part of that plan would also build a station at Rego Park, which would be close to the Queens Center Mall and the M and R subway lines that run nearby. The revived line would reduce traffic on Woodhaven Boulevard, he said.

Rozankowski also said that it would allow quicker travel to Manhattan if you wanted to take public transportation from Woodhaven to get there.

“Today, if you want to get to midtown Manhattan using the J train, the trip takes you a solid hour,” he said. “If the Rockaway line is reactivated, that same trip would take 23 minutes.”

The QueensWay side then had the chance to state their case.

Andrea Crawford and Travis Terry both discussed why that stretch of land should be turned into a bike trail. Crawford is the chairwoman of Community Board 9 and Terry is from The Trust for Public Land, a nonprofit company based in San Francisco.

Crawford said that one of the reasons that the borough would benefit from the QueensWay is that it would allow for more types businesses to open up and see a resurgence, similar to what happened in Brooklyn, in terms of the art scene and more restaurants.

They also said that it would be costly to reactivate the line and maintain it. One reason that the line was originally closed was due to low ridership, Crawford said. The noise from the daily zipping by on a daily basis is also another reason that they prefer the QueensWay, she said.

The inspiration for building a QueensWay bike trail came from other types of bike trail including the High Line in Manhattan and the Promenade Plante in Paris, France. Crawford said that she would like to see something like that built In Queens.

“Wouldn’t it be wonderful to go to our own green space?” she asked the audience. “We’re trying to take this 3.5 miles stretch of land and create something that would feed the soul, the spirit and the economy of Queens.”

After each side had their chance to present their side, the residents took the microphone, one by one, and gave their two cents on what should be done with the vacant land.

The crowd seemingly favored the QueensWay plan, with many screaming and shouting in approval whenever someone spoke in favor of the bike trail.

The contention of some residents who don’t want the LIRR revived is the noise that it would bring to the neighborhood.

“You’ll hear it and you’ll feel it!” yelled Dominick Artale, who lives on 98th Street in Woodhaven.

In response to Artale and others complaining about the potential noise, Rozankowski said that people living close to the line would get used to the train passing by on a daily basis.

“You’ll learn after one or two days to quickly drown it out,” he said, which drew disapproval from many who attended. “You certainly drown out fire engines; you drown out the sanitation department at night.”

Mildred Facinelli, another Woodhaven resident, added to another resident’s question earlier about if Resorts World Casino would be involved in the LIRR project.

“Look at the front of the flyer! It says ‘access to casino’’ Facinelli said, which drew a roar of applause from the crowd. Rozankowski said that the casino has nothing to do with him and other supporters who want the train to return.

Joe Guzman, who also lives on 98th Street, is against the QueensWay. He asked Crawford what is their alternative to improving mass transit for Queens if the bike trail is created.

She didn’t answer the question directly, only saying that reactivating the LIRR line would not be feasible for Queens.
Another resident asked Crawford what will be done about parking around the area if it is built.

She said that is something her and The Trust for Public Land is working on as they polish the bike trail plan and community input is encouraged for parking and the project as a whole. 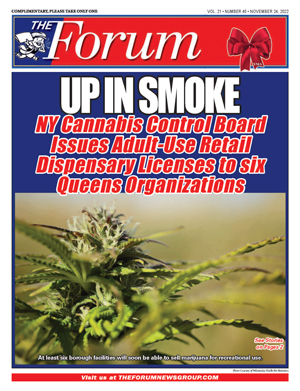