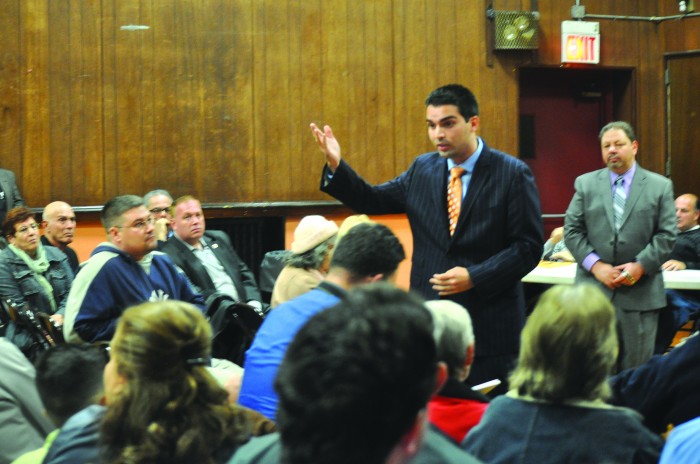 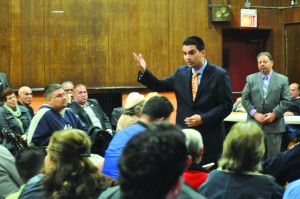 Councilman Eric Ulrich speaks to residents at the Middle Village Property Owners meeting on Monday night to say why he should be elected as the state senator of the 15th senate district.

In another of many forums leading up to election night, State Senator Joe Addabbo and Councilman Eric Ulrich took part in a candidate’s night at the Middle Village Property Owners and Residents Association meeting on Monday night.

The two men are in a close race for the 15th Senate district seat that will be decided in November. Addabbo currently holds the seat and is looking for re-election while Ulrich is hoping to win the seat that the senator has held since 2009. A poll released this week highlights how close the race is expected to be with Addabbo ahead of Ulrich by only 2 points with a four point margin of error.

The candidates each had seven minutes to state their case to the audience about why they should represent neighborhoods like Middle Village in Albany and what their plans are if they win the seat. They then each got to ask each other one question about their policies then the two politicians would take questions from the crowd in attendance.

First up to speak was Councilman Ulrich.

He highlighted three of the issues that he is concerned with: jobs, taxes and public safety.

As for jobs, Ulrich said that he wants to create well-paying jobs that people can make a living on while supporting a family and taking care of other daily expenses. He also talked about ensuring people keep the jobs that they already have, something that he says isn’t discussed as much as creating jobs.

“That something that we did at the city council when we avoided layoffs of cops, fireman and teachers and that’s something we ought to do at the state level as well,” the councilman said.

Regarding public safety, Ulrich said that in 2001, there were about 40,000 police officers throughout New York City and today, in 2012, that number has decreased to about 34,500. He said that the city has to be tough on crime and give police whatever they need to keep crime numbers down.

“I support giving police and law enforcement all the tools that they need, number 1: to keep our streets safe and number 2: to keep people behind bars where they belong,” Ulrich said. He added that he supports stop and frisk because it’s an effective way to fight crime.

Then Addabbo got his chance to ask Ulrich a question. He asked the councilman about his stance on hydrofracking. This is one issue that the two men have differing opinions on.

Ulrich said that he supports hydrofracking because of the potential it has to create jobs for people in both New York City and State and it can also raise billions of dollars in tax revenue for New York. He added that if it is proven by scientists that hydrofracking is safe and will not damage drinking water then it should be permitted in New York State.

As for Addabbo, he said that he’s putting the public first when it comes to their issues, needs and questions and that’s always been a main driver for how he does things in Albany.

“For me, and it’s always been my principle, the value of putting people first. Making their interests the most important thing to me, looking at the problem though their eyes, not through mine,” Addabbo said.

He said that he has worked with Governor Andrew Cuomo, who endorsed the senator this week in his reelection bid, on passing two state budgets on time and he wants to continue to work with him in his next term.

Addabbo then brought up hydrofracking and how his opinion differs from Ulrich’s.

He said that the jobs that would come from that would mostly benefit the people and the economy of people in upstate New York, not those in New York City. He also said that it would damage the state’s water.

“Our drinking water is at stake, a resource that you cannot replace,” the state senator said. “What’s the sense of creating an economic boost up there if our water is contaminated and our small businesses can’t use drinking water?”

He also mentioned taxes and jobs, including working with companies like Con Edison to figure out how to cut utility costs for small businesses and creating job opportunities through the several job fairs he has hosted in his years as state senator.

Ulrich then asked Addabbo about Obamacare and what his stance is on that. It’s another issue that they differ on. Ulrich said he doesn’t support it because he’s concerned about the cuts to Medicare and cuts for seniors.

Addabbo responded by saying that while he does support the president’s plan with its intended purpose to help give health care for everybody, if it comes to fruition and negatively affects the country, he will be on the phone demanding a change. He likened it to other situations he’s fought to change since his time in Albany. Obamacare, he said, would be no different.