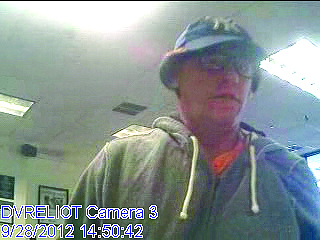 Police are seeking this man as a suspect in a Sept. 28 bank robbery in Middle Village. Photo courtesy of NYPD.

The NYPD’s Major Case Squad is still searching for a man who robbed a Middle Village bank mid-afternoon on Sept. 28.

Police said the man entered Cross County Savings Bank at 80-10 Eliot Avenue in Middle Village wearing a grey hoodie, a Yankee hat and thick eyeglasses. He was also wearing a red wig, according to police.

He walked up and handed the teller a note demanding the money.

Police said he fled on foot in an unknown direction with about $7,000 in cash. It is unknown whether the man was armed.

Police described the suspect as white male, between 35 and 40 years old, 150 pounds and about 6 feet 2 inches tall.

“There’s nothing about him that would stick out in a crowd too much,” Cody said. “We’ll continue to search for him.”

Cody and the NYPD asked that anyone with information on the robbery contact them through Crime Stoppers as 1 (800)-577-TIPS (8477).

All tips are confidential.