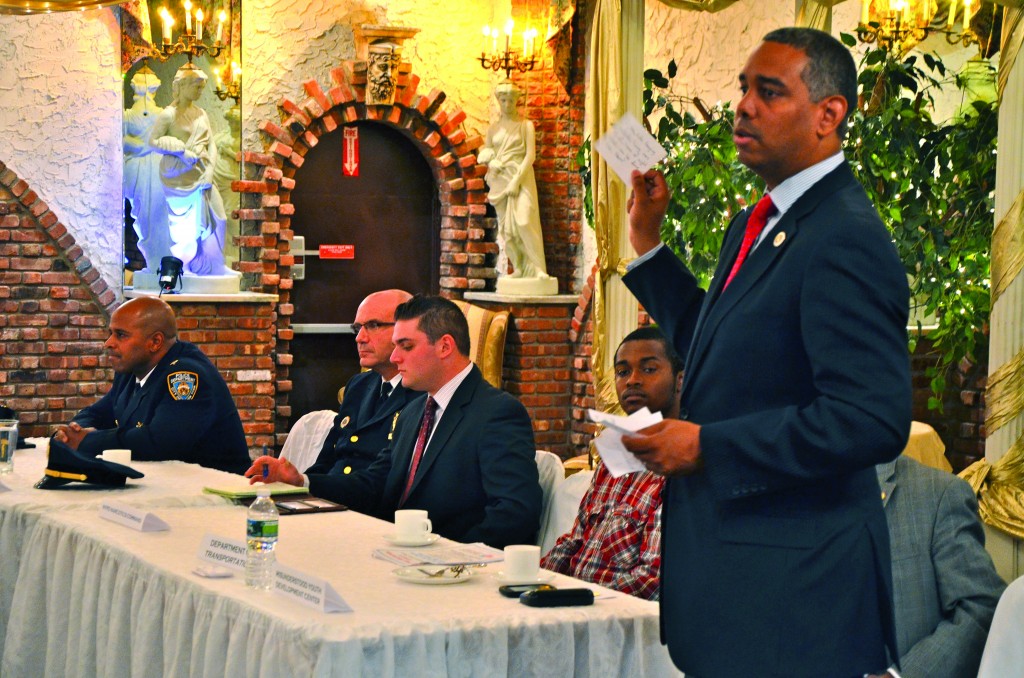 At Thursday’s public safety town hall meeting in Richmond Hill, Council Member Ruben Wills conducted an orderly meeting between his constituents and several city agencies. The panel included the commanding officers of the 102 and 106 Precincts, NYPD narcotics representatives and a member of the misunderstood youth development center. A representative from the Department of Transportation was also on hand, with the majority of people’s questions being traffic related.

Rather than have everyone shout over one another, Council Member Wills asked that people write their questions on the pieces of paper that were handed out before the meeting started. Wills than read the questions, and either tried to answer it himself, or forwarded it to one of the representatives sitting on the panel.

Complaints about noise pollution and problems finding places to vote were some of the topics discussed at the meeting, which was held in the downstairs hall at Villa Russo.

But people seemed most concerned about traffic problems in Richmond Hill and its surrounding neighborhoods. They were particularly vocal about the proposed traffic calming plan that the DOT has proposed for Lefferts Boulevard. The potential redesign would remove one travel lane in each direction between North Conduit Avenue and Rockaway Boulevard. It would also have installed a painted center median with left turn bays at intersections and a 14’- wide parking and loading lane, according to DOT representatives.

Many people at the meeting were unaware of this plan, despite that DOT representatives announced it at a Community Board 10 meeting two weeks ago. And just like at that meeting, most attending groaned over the changes, and worried that it could cause the same problems that people said came from the recent traffic calming at Rockaway Boulevard.
The DOT representative said that the Rockaway Boulevard treatment was completely different compared to Lefferts Boulevard.

Council Member Wills said he would write a letter to the DOT commissioner and put together a town hall meeting regarding the proposed changes to Lefferts Boulevard.

One note asked that officials do something about speeding near P.S. 108 on 109th Avenue in South Ozone Park. Wills said that he would see about having roaming speed boards he acquired for other school zones temporarily moved to 108. He also requested that police monitor the area.

“In a lot of our school zones we have people who are disrespectful to the lives of children,” Wills said, who had the boards installed at two schools to reduce speeding.

The DOT representative noted each complaint and said he would forward any request to his superiors.