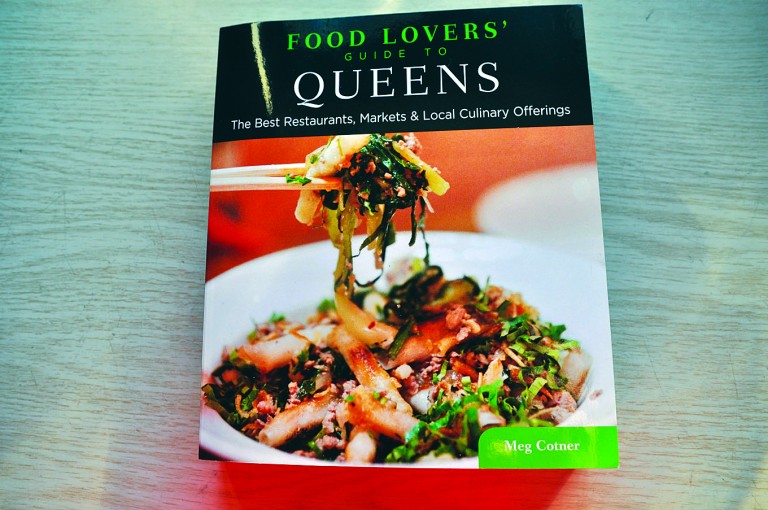 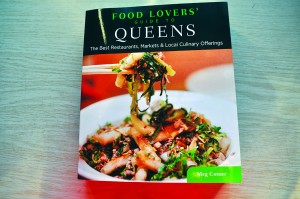 People looking to dine in Queens can now look through a new book while choosing a place for a delicious meal.

Meg Cotner, an Astoria-based blogger whose other work includes being the editor of Queensnyc.com, has written a book called “Food Lovers’ Guide to Queens” which explores the many different restaurants and food markets that the borough has to offer.

The 400-page book traverses through several different neighborhoods, starting from Astoria/Long Island City and ending in the South Richmond Hill/Ozone Park and covering everything in between, showcasing the best restaurants each area has to offer.

The guide, which came out on December 4th, is divided up by blocks of neighborhoods that are close to each other and in those sections it is further divided up by “Foodie Faves,” which are restaurant recommendations for a resident or a visitor and “Landmarks,” which are also suggestions but also shows places that are well-established and have developed a following.

For Cotner, finding what restaurants to try out for the book came from several different places. She asked friends for eatery recommendations, researched on her own what places are worth checking out as well as burning shoe leather and walked through major streets in some neighborhood where she found places on her own.

“I just ate, ate and ate for three and a half months,” said Cotner, who visited all the restaurants in the guide from March of this year until around the middle of June.

She said that although she was already familiar with places to dine in neighborhoods like Astoria, Long Island City and Jackson Heights, she was delighted to discover other areas like Elmhurst and Woodhaven that had some excellent restaurants as well.

In Elmhurst, she said she found that it was an area with different types Asian food places that people could visit, including Indonesian, Thai and Vietnamese.

“That was a very fun discovery,” she said. “Those are very old Queens Sort of places.”

As for other neighborhoods in Queens, in the Glendale, Maspeth, Middle Village, Ridgewood region, she wrote about places such as Krolewskie Jadlo, a Polish restaurant at 66-21 Fresh Pond Road in Ridgewood, Uvarara Vineria e Ristoro, an Italian restaurant located at 79-28 Metropolitan Avenue in Middle Village and Zum Stammtisch, a German restaurant/bar, which is at 69-46 Myrtle Avenue in Glendale.

Moving over to the Forest Hills, Rego Park, Kew Gardens area, Cotner said she particularly enjoyed her meal at Danny Brown Wine Bar & Kitchen on Metropolitan Avenue in Forest Hills. Other places she included from these neighborhoods include Brownie & Cream bakery on Austin Street in Forest Hills and a Rego Park Kosher/Russian restaurant called Cheburechnaya, which is at 92-09 63 rd Drive.

Other places she also wrote about is Warung Kario, Surinamese restaurant on 128-12 Liberty Avenue in South Richmond Hill and Dallis Brothers Coffee, which is at 100-32 Atlantic Avenue in Ozone Park.

Although Cotner visited many eateries while putting together material for the book, she said that there’s

so much left of the borough that she has yet to explore through its food.

“I feel like I only scratched the surface of Queens,” she said.

Cotner hopes to write a second edition of this guide which would allow her to explore other neighborhoods that she did not get to for this book. That includes Howard Beach, Springfield Gardens, Queens Village as well as exploring more of Douglaston and Whitestone.

When people pick up the guide, Cotner said that she hopes it will encourage people from other boroughs to satisfy their taste buds in Queens as well as get people who live in the borough to explore delicious food their area has to offer.

“They might just discover something that’s in the neighborhood that they may not have known about before,” Cotner said.