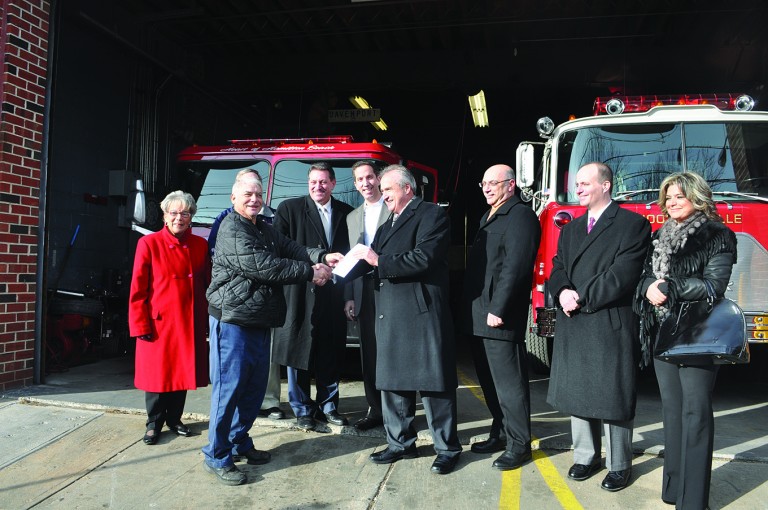 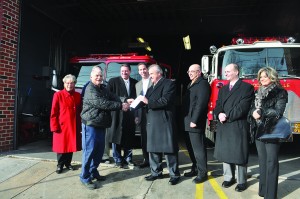 A firehouse that has served one of the communities hit hard by Hurricane Sandy received a large donation of money on Thursday.

The management of the Duane Reade/Walgreens, which has a store on Cross Bay Boulevard in Howard Beach, donated $25,000 to the West Hamilton Beach Volunteer Fire Department. Money that should help them on the road to recovery and benefit the neighborhood it covers.

As a result of Sandy, the West Hamilton VFD lost three fire trucks, two ambulances and other equipment like defibrillators.

At a Thursday afternoon press conference held outside the firehouse on Davenport Court, Greg Calvano, senior director of store operations at Duane Reade/Walgreens said that they were elated to help the volunteer fire department with replacing what was lost due to the storm.

“Being a part of the community, we understand the value, especially the volunteer fire department, of what they bring,” he said. “When we heard that they lost all their equipment and a lot of their personalstuff in the firehouse, [we said] it’s time the communities joined together.”

Jonah Cohen, president of the West Hamilton VFD, thanked Duane Reade/Walgreens for helping them out financially, adding that they aren’t the only ones involved in recovery.

“There are lots of people in the community that have volunteered their time to help others, and that’s an important thing to understand,” Cohen said.

State Senator Joe Addabbo, Assemblyman Phil Goldfeder and Queens Borough President Helen Marshall also attended the press conference to commend the fire department for the work that they’ve done and to thank the storefront for the donation.

“For us here in Howard Beach and Hamilton Beach, it doesn’t take a storm for us to realize the importance of the West Hamilton Beach Fire Department,” Addabbo said. “Today, we’re going to take a moment to greatly thank the Duane Reade/Walgreens family for their donation, which directly affects and benefits the people of this community.”

“They (Duane Reade/Walgreens) have been a presence to help this city grow and help every community that they are in to grow and better themselves,” Goldfeder said. “Today is just another example of what we’ve seen for many, many years: a real investment in the community.”

Cohen said that the money will go towards buying a replacement ambulance truck that was destroyed by the storm.