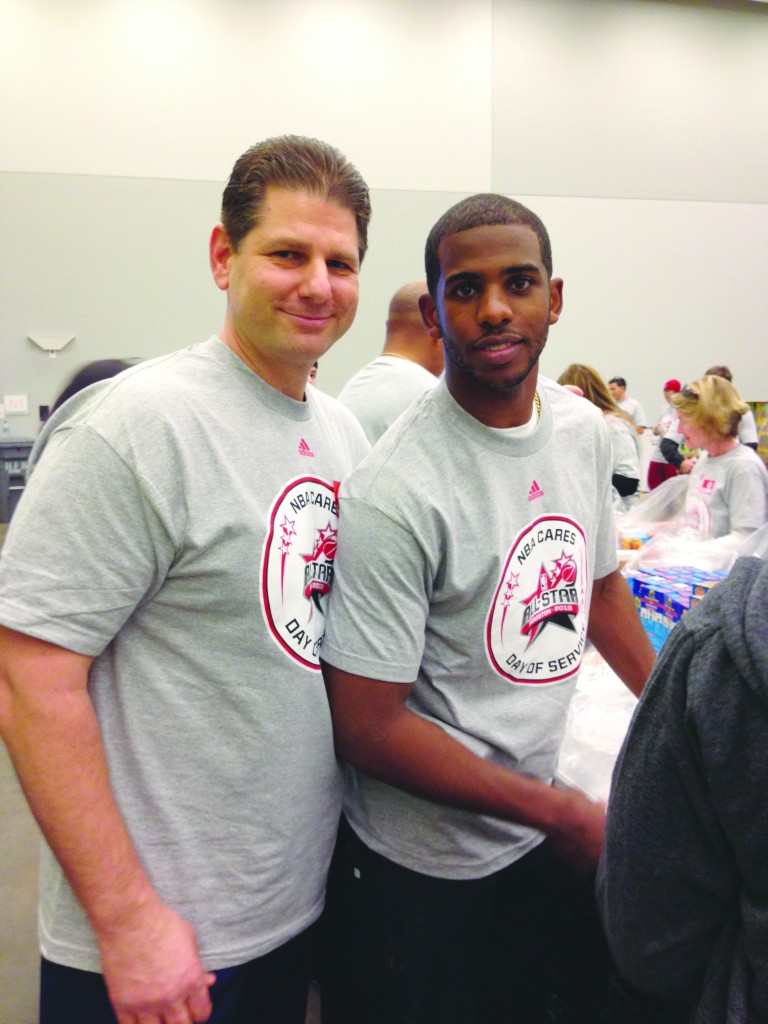 Kevin Durant of the Oklahoma City Thunder with Scott Baron

It’s safe to say that the average basketball fan would probably jump through hoops just to be in attendance at an NBA All Star weekend.

A legendary sports themed experience, it’s a weekend filled with excitement over the big game, as well as an array of colorful court suits and shoes, a mob of celebrities, great food and entertainment and of course the activities centered around one of the most talked about and expansive philanthropic efforts in the entire world of professional sports—NBA Cares.

This year, Howard Beach attorney Scott Baron was invited to travel to Houston for the festivities. And although Baron is no slouch at 6’3″, it wasn’t his hoop skills that sent the NBA to his door bearing an invitation—it was his well known philanthropy and volunterism that was calling him to the Lone Star State.

With Flo Allen-Hopson, mother of Ray Allen of the Miami Heat

Baron, an avid basketball fan, jumped at the opportunity to get on board; but it wasn’t the fanfare, the anticipation of the game or the host of other activities crammed into the action packed weekend—for Baron it was the chance to roll up his sleeves and get into whatever NBA Cares was bringing to Houston. In fact, Baron was so excited over it that he enlisted his entire family—a wife and three sons—to volunteer alongside him.

NBA Cares is the league’s global community outreach initiative that addresses important social issues such as education, youth and family development, and health and wellness. The NBA and its teams support a range of programs, partners and initiatives that strive to positively impact children and families worldwide.

With Chris Paul of the Los Angeles Clippers

As part of the league’s mission to demonstrate leadership in social responsibility, NBA Cares reaches communities through philanthropy, hands-on service and legacy projects. Since October 2005 when NBA Cares was launched, the league and teams have raised more than $210 million for charity, provided more than 2.3 million hours of hands-on service, and built more than 760 places where kids and families can live, learn or play in communities around the world.

This year, as part of the NBA Cares Day of Service, players visited the Houston Food Bank . And Scott Baron and his entire family went right along with them.

And so after a long hard day of bagging more than 2,500 meals the baron’s were still able to go back and enjoy the festivities.

Packing up food packs with Jeremy Evans of the Utah Jazz

The Houston Food bank is the nation’s largest size Feeding America food bank and source of food for hunger relief charities. They have been named one of 10 Top-Notch Charities across the nation by Charity Navigator. They are comprised of a network of 500 food pantries, soup kitchens, senior centers and other agencies, feeding a total of 137,000 people each week, provides 50 million nutritious meals annually. Fresh produce, meat and nonperishables are

With Paul George of the Indiana Pacers

When asked about his experience at the food bank, Baron flashed that familiar smile and said,””All in all it was a great feeling,”. But Baron said the greatest feeling for him came when he asked his own kids what the best part of their weekend was. “They told me that the trip to the food bank was by far the thing they enjoyed most. That was the best thing I could ever have heard.”