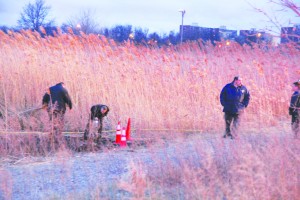 Police at the scene stand over two burned bodies that were dumped in the weeded area along 159th Avenue near 78th Street.

Surveillance video from St. Helens’ Parish captured the images of three vehicles believed to be involved in the homicide of two Brooklyn men set on fire early Wednesday morning.

Two cars and a van were seen driving down 157th Avenue at 83rd Street near where the fire began around 4:15 a.m.

The fire grew quickly and turned into a two-alarm blaze near 159th Avenue and 78th Street.

Firefighters battling the flames worked to put them out quickly and when the they were finally extinguished a grisly discovery was made just beyond the vehicle access path.

The bodies of two men, fully clothed and both bound and gagged were found lying face down in Spring Creek Park, a marshland area near the Belt Parkway.

Police haaae positively identified the two men as Rudy Superville, 22 and Gary Lopez, 25, both from Brooklyn.

Another resident who lives along the stretch of tall weeds says he woke up around 4 a.m. and saw the flames. “It’s not unusual around here,” Michael Silver told reporters. “We are used to fires here. This is just an added twist.” And Silver went on to speculate that the killers had dumped the bodies off and then lit them up to get rid of the evidence.

Other residents gathered and spoke of the blaze not being of primary concern.

“If you live here or you know anything about Howard Beach, the brush fire is no surprise and really something we expect,” said Bobby G. “But to find the bodies is something else. That’s enough to shake anybody up.”

And he said that it was likely someone from out of the area just coming into this neighborhood to do their dirty work. “Everybody knows about these weeds and what a great cover they are for illegal activity,” the senior citizen living in Howard Beach for 36 years said. “It’s just amazing that we have to put up with this nonsense in a neighborhood like this. The parks department should cut this stuff down. It would be lot safer for all of us.”

Police and fire marshals are investigating the blaze and the homicide. The medical examiner will work to determine the cause of death.

Anyone with information on the case should contact the Crime Stoppers hotline at 1-800-577-TIPS, or text CRIMES and then enter TIP577, or visit www.nypdcrimestoppers.com.