Pat Adams' car, stripped of its wheels and elevated on cinder blocks.

Less than three weeks after The Forum featured a story on its front cover in response to rampant wheel thefts and auto vandalism in the Howard Beach community, the papers publisher was herself a victim of the exact theft described in the February 21st issue.

Patricia Adams was awakened by her brother-in-law, Joe Gulino, who was passing her home on Tuesday morning about 6:15 a.m. “I have a habit of checking the house every morning on my way to work,” Gulino said, “and I just couldn’t believe my eyes.”

There on the driveway, directly to the side of the front steps, was Adams’ car, a 2013 Infinti M 37 XS in its usual spot—except instead of resting on the driveway, the luxury sports sedan was sitting atop cinder blocks.

“My first reaction was ‘Great, the front cover will be finished early this week,'” said Adams, but the reality of the situation quickly set in.

The thieves removed the wheels from the car right outside the front door. The vehicle was not only equipped with wheel locks but has an alarm sensor that is supposed to go off if the car is lifted off the ground. 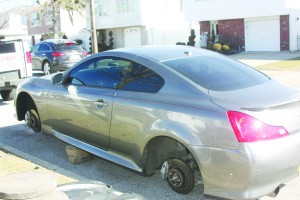 A second Infiniti, a G37 sports coupe was struck the same night, on the other side of Howard Beach as it sat in front of its owners home on 79th Street off 159th Avenue.

“It’s very upsetting to know these guys were so close to my front door and that they came equipped to bypass a sophisticated alarm system as well as with the tools to cut right through some very expensive wheel locks.”

Not only did the thieves bypass any protective measures on the car, they also found a way to keep the light sensors that line the driveway from going off.

“It’s certainly very different to write the news as opposed to being the news,” Adams joked. “I know that police are doing everything they can to bring this activity to a halt, but these guys are so quick and obviously so experienced that it is very difficult to catch them.”

And while police visited the publishers home early Tuesday morning to take the report, they were alerted to an incident involving another Infiniti, parked in front of a residence on 79th Street. The vehicle also had its wheels stripped and was left resting on blocks. In both instances, the brazen thieves had removed the cement blocks from neighbor’s homes and carried them to the targeted vehicles.

In addition to a patrol car that was sent to complete a report for grand larceny, an evidence collection team was dispatched in an attempt to collect fingerprints and detectives from the 106 squad also visited the scene to canvass the block and speak to neighbors in search of ay leads.

“This is a crime that severely compromises the quality of life in every neighborhood in which it hits,” said Adams. “I have personally reported on this type of crime in Lindenwood, Howard Beach, Middle Village and Forest Hills.”

The publisher went on to say she is confident that if any precinct can bring it under control, it’s the 106. “I work with six precincts within our total readership areas and under the command of Inspector Thomas Pascale, the 106 is hands down the most effective.” But, she cautions, no matter how much the police do, there is still a lack of manpower that effects the productivity of the department. “The public must do its part to assist police. By watching out for anything suspicious and reporting it immediately by calling 911, we can make our police force much more effective , and at the same time keep our community safer,” said Adams.