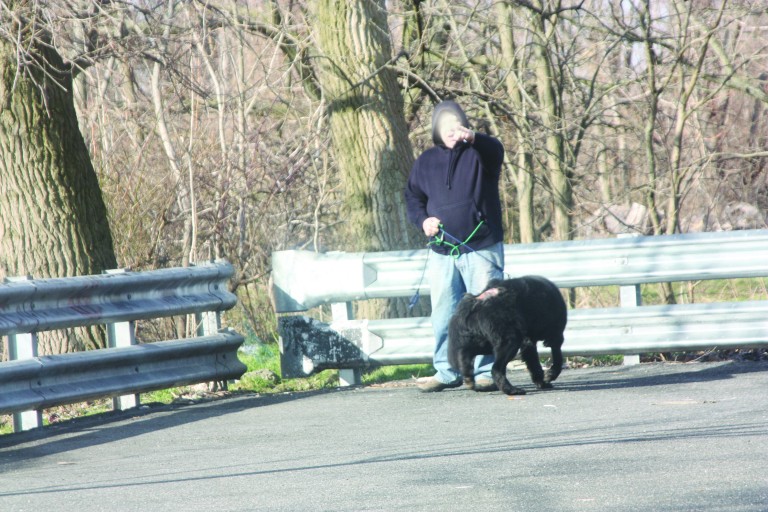 This man, whose face has been slightly blurred, was extremely unhappy with The Forum when we caught him with both his dogs off their leashes and with no intent to "scoop the poop." His pointed finger was accompanied by words which cannot be printed, demands to see the photos in the camera, and a string of threats. His actions were reported to the 106th Precinct.

Members of the Lindenwood Alliance revealed a bevy of complaints and concerns at their monthly meeting held earlier this week at the Fairfield Arms.

Several residents raised their hands and spoke to those in attendance about an issue which they say is ruining the quality of their lives and about which no one has done anything to help them.

The homeowners say they are plagued with an issue centered around the irresponsibility of dog walkers and owners along 155th Avenue and 78 th Street in Lindenwood.

Dogs are repeatedly being allowed to run down the street off their leashes, which has no outlet and is a dead end with a lot at the corner. The dogs are using the lot to go to the bathroom and also the grass plots that line the sidewalks in front of the residential property.

The residents who spoke at the meeting asked that their names not be revealed because they said there have already been unpleasant exchanges between several of the area residents and the dog walkers.

“It’s a very disgusting way to live,” said one man who asked to be identified only as Joe. “I have asked nicely for some of these people to pick up after their dogs, but I can assure you the language that was used for a response is nothing you can print.”

And Joe is not the only neighbor who has tried to reason with the dog owners. Another man who spoke to The Forum outside his home near 155th Avenue said the problem is really out of hand.

“The summer is coming,” said Mr. M, “and I can tell you that the smell in the heat is absolutely disgusting.” I have to come out every day and clean up after these people. That’s no way to live.”

One neighbor he says, has six dogs that she allows to run all over everyone’s property without ever coming prepared to clean up after them.

Alliance founder Joann Ariola says that the Alliance will now write letters to the appropriate city agencies in order to encourage the installation of signs reminding people of the law and fines for breaking it regular clean-ups and the enforcement of summonses. “Our residents have the right to expect that they can walk in front of their homes without having to worry about cleaning a mess off their shoes,” said Ariola. “The fact that people want to enjoy their homes and their neighborhood is not an unreasonable expectation.”

Ariola contacted the office of Councilman Eric Ulrich (R-Howard Beach) to discuss the problem and a possible solution set. A representative from the councilman’s office says he will personally be looking into the situation and making the necessary phone calls to get the ball rolling for signage and enforcement.